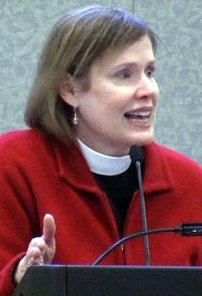 [American Cathedral in Paris] The American Cathedral  in Paris has called the Reverend Lucinda R. Laird, rector of St. Matthew’s Episcopal Church in Louisville, Kentucky, to be its 10th Dean and Rector. The Reverend Ms. Laird has accepted the call, and will take up the position in the spring.

In making the announcement, Jeb Seder, senior warden of the Paris Cathedral, said: “The Vestry and I look forward with enthusiasm and excitement to welcoming her.  The Cathedral went through a yearlong, worldwide search process, and the community here was impressed with the number of strong candidates who showed an interest in serving with us.”

Expressing her pleasure and excitement in accepting the call, Ms. Laird said: “I am attracted to the Cathedral as a place that is a crossroads, and a place that is hospitable and radically inclusive.”

In her initial letter to the Search Committee she wrote, “I like the openness to the ‘cultures, languages and faiths’ that surround you. I appreciate the commitment to outreach. Your commitment to Christian formation for children, youth and adults is equally important. I am struck by the quality of your Sunday Forum offerings. Your tradition of strong lay involvement is a huge asset. Most of all, I am drawn by the central place that worship has in the life of the Cathedral, and the gift of music offered to the congregation and the city.”

Mr. Seder, explaining factors in the Vestry’s ultimate decision, said: “Lucinda Laird has experience in leading communities both spiritually and practically, and her energy and love of being a pastor in the largest sense led our discernment to call her. We were blessed both in the choices the Lord offered, and by His guidance in leading Lucinda and the Vestry to this mutual call.”

The Right Reverend Pierre Whalon, whose ecclesiastical seat as Bishop-in-Charge of the Convocation of Episcopal Churches in Europe is at the Cathedral, issued this statement:

“It is a great pleasure to welcome the Reverend Lucinda Laird to the Convocation of Episcopal Churches in Europe. She is one of the most highly regarded priests in the Episcopal Church, and as Dean of the American Cathedral in Paris, she will bring a wealth of experience to this multinational, multicultural parish.  I look forward to working with Lucinda Laird to make the Cathedral and the Convocation an ever more effective part of God’s mission, in Paris and “away to the ends of the earth.”

The process of discernment that led to Ms. Laird’s call began a year ago, first with a Parish Retreat and the subsequent development of a Parish Profile that reflected members’ hopes and wishes about a new Dean and their goals for the church and its next leader. Spiritual leadership was the overwhelming preference expressed by the congregation for the next Dean.

With those desires in mind, the Search Committee considered scores of applications and interviewed dozens of candidates. “The rigor and thoroughness of the process, and the spiritual way in which it was conducted, were very impressive,” said Mr. Seder.

Ms. Laird has been rector in Louisville since 1998 and before that was rector at St. Mark’s Church in Teaneck, New Jersey. Previous work was as Assistant for College Ministries at the Cathedral of St. John the Divine in New York City and as Curate of the parish of Christ the Redeemer in Pelham, New York.

A native of New Orleans, Ms. Laird is a graduate of Barnard College and the General Theological Seminary. She also studied acting at Temple University.

Within the Episcopal Church she has been on the faculty of the Preaching Excellence Program (Episcopal Preaching Foundation); a member of the Standing Commission on Ecumenical Relations; has served on the Advisory Board of the Church Pension Fund; is on the Board of Trustees of the General Theological Seminary; and has been president of Associate Alumni/ae of the General Seminary.

In Kentucky she has served on the Board of Trustees of Berea College in Berea, Kentucky; the board of directors of Faith Channel 19, and the Board of Directors of Planned Parenthood of Louisville. She has hosted or been a panelist on public affairs television programs in both Louisville and New York, has done mission work in Kenya and the Ivory Coast, and at one period swapped parishes with an English vicar.

As the first woman dean of the Paris Cathedral, she joins a growing list of women serving in a similar capacity at several of America’s largest Episcopal Cathedrals. There are also several dozen women serving as bishops in the worldwide Anglican Communion, and notably as the Presiding Bishop (Primate) of the Episcopal Church.

As the 10th Dean of the Cathedral of the Holy Trinity, known as the American Cathedral in Paris, the Reverend Ms. Laird succeeds the Reverend Canon Zachary Fleetwood, who resigned a year ago to accept a call to St. Columba’s-by-the-Castle in Edinburgh. The Right Reverend Peter James Lee, retired bishop of Virginia, has served as Interim Dean and Rector, a role he fulfilled previously at both Grace Cathedral in San Francisco and the General Theological Seminary in New York.

In Paris she will join the existing staff of the Cathedral, including the Reverend Elizabeth Hall Hendrick, Canon Pastor; Giles Williams, Canon for Administration; and Zachary Ullery, Director of Music.

For more than a century the Cathedral of the Holy Trinity, known as the American Cathedral in Paris, has been a center of worship for English-speakers abroad. Located at 23 Avenue George V, in the heart of one of the world’s most beautiful cities, the Cathedral includes in its congregation Americans, Britons and French as well as many other Europeans, Asians, Africans and Latin Americans.  Permanent parishioners total about 400 and their numbers are considerably augmented by students, tourists and business persons here on shorter-term assignments.

The Cathedral – actually a pro-Cathedral, in that it remains a parish church – is the seat of the Convocation of Episcopal Churches in Europe, presided over by Bishop Whalon.