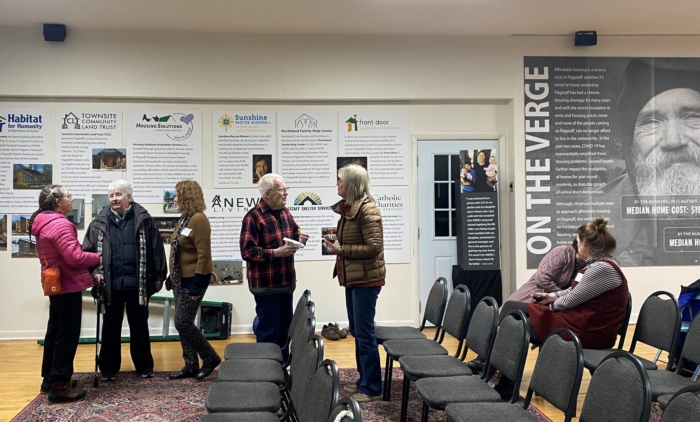 The “On the Verge – The Flagstaff Housing Crisis” exhibit at the Episcopal Church of the Epiphany in Flagstaff, Arizona. Photo source: Housing Solutions of Northern Arizona

[Episcopal News Service] The Episcopal Church of the Epiphany in Flagstaff, Arizona, is not only a spiritual home for its congregation – it’s also a place where the wider community can come to learn about some of the most pressing issues of the day through its exhibition series. The latest topic in the series is one that is tearing at the social fabric of America, from big cities to small towns: the affordable housing crisis.

The exhibit, titled “On the Verge – The Flagstaff Housing Crisis,” opened on Jan. 13 as the latest in the church’s “Open Doors: Art in Action” project. The series highlights how national and global issues impact the city of about 78,000, through presentations and artwork displayed in the church’s community meeting room. They also involve a reception one night for each of the three months they run, with speakers breaking down different subsets of the main theme.

Though most of the exhibits have featured art as a primary medium for engaging with the topic, “On the Verge” is “more informational than artistic,” said Dan Dooley, Art in Action co-chair. Running through March 31, it includes presentations on how local agencies are addressing the problem, as well as photos and displays that tell the personal stories of locals affected by it.

The inspiration for this exhibit came about eight months ago, when Dooley and fellow parishioner and co-chair Mary Ross were working with Habitat for Humanity on a project to build starter homes in the Flagstaff area, which has too few of them to support demand.

“We started gathering information about starter homes and realized that the issue was so much bigger than just affordable housing; that it was about homelessness and transitional housing, domestic violence [shelters] … but also about solutions and what the community is going to do,” Dooley told Episcopal News Service. “So it blossomed from something very simple to something a lot more complicated.”

There have been 20 exhibits in the series, which started in 2018, said the Rev. Alison Lee, interim rector. The first dealt with the health impacts of uranium mining. Other topics have included Arizona’s water problems, the U.S.-Mexico border and incarceration. Some are more focused on art – such as an exhibit on Indigenous women’s art – and there have been juried and invitational art shows.

Dooley told ENS the housing crisis exhibit is “probably the most difficult exhibit that we’ve put together” because of all the information he and Ross compiled for it.

Flagstaff’s housing problem is a microcosm of a nationwide affordability crisis that has worsened drastically during the COVID-19 pandemic. In 2022, for the first time on record, the average American renting household spent 30% of its income on rent, according to Moody’s Analytics, and the median home price reached an all-time high.

Flagstaff declared a housing emergency in 2020 based on the stark disparity between the city’s average income and housing prices. Half of Flagstaff residents are considered low-income, but the city’s housing costs were over 33% higher than the national average in 2020. Since 2011, housing costs have increased 119% while wages have only gone up 16%, according to the Arizona Daily Sun.

Though the exhibit exposes the severity of the situation, it focuses more on solutions that are proposed or already in progress. On the first reception night, the mayor and four local leaders of housing-related programs gave presentations on the work that they’re doing to help.

“What I noticed in terms of the reactions,” Lee told ENS “was as people were speaking, or as they walked around and observed and read the exhibit panels, there was either a nodding of the head … a heartbreaking recognition that this is indeed what’s going on, or there was a shock. As in, ‘Oh my gosh, I can’t believe these statistics. … This is not OK.’

“But there was also a shift, which was palpable by the end, of all the speakers towards hope, because they were also learning about new opportunities that were coming about that they had not yet heard.”

Flagstaff voters passed a $20 million bond package in 2022 to increase the supply of affordable housing, making it the first city in Arizona to do so. Habitat for Humanity continues to build starter homes, and Catholic Charities is partnering with a local nonprofit to build a 140-unit senior housing project downtown, Dooley said.

Several nonprofits are pursuing a unique strategy that seems to be catching on: buying and renovating rundown motels along Route 66 and turning them into low-income short-term housing. A local shelter that has partnered with Epiphany in the past has now bought two; the second motel purchase was announced at the exhibit’s opening reception, Lee said.

Before the pandemic, the shelter would turn to Epiphany to house overflow guests on cold nights. Sometimes that meant sheltering 40 to 50 people in the parish hall and serving them breakfast the next morning, Lee said. That stopped with the onset of the pandemic.

“We did ask if they wanted to get that started again, and it looks like they may not need to because of the purchase of these two hotels,” Lee said.

Ross says the Open Doors: Art in Action program is an important community resource, but it’s also a concrete way for the church to live out its mission.

“It’s a forum to talk about problems and solutions, [where] artists have a free place to exhibit … and it became an outreach to try and invite the community. A lot of people are more secularly minded. But if Epiphany reaches out in a lot of different ways, and this has become one of them, then people feel comfortable now that might not have come to church. Now they know it’s not just a church. It’s welcoming people. It’s good food, it’s art. It’s all kinds of things,” Ross told ENS.

“The post-Communion prayer at the end of the Eucharist service says, ‘Now, Father, send us out to do the work that you have given us to do, to love and serve you as faithful witnesses of Christ our Lord.’ That’s what this is about.”