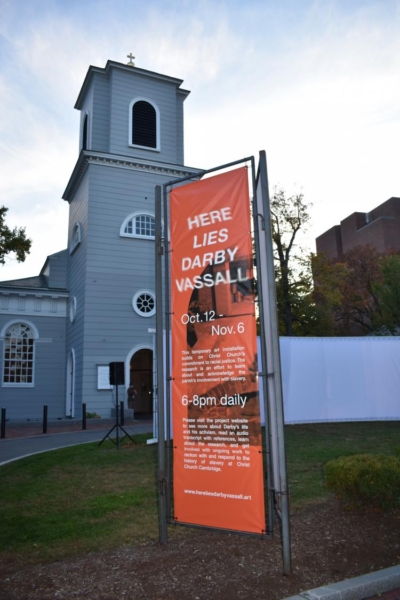 The multimedia installation at Christ Church in Cambridge is putting a public spotlight on the parish’s entanglement in the legacy of slavery. Photo: Tracy J. Sukraw

[Diocese of Massachusetts] As evening darkness fell over Harvard Square in Cambridge on Oct. 12, a big screen erected on the front lawn of Christ Church lit up with a message for all to see:

With two families of Darby Vassall’s descendants watching from front-row folding chairs amid a standing crowd of parishioners, guests and curious passers-by, the 11-minute film had its outdoor debut on the anniversary of Vassall’s death in 1861. As part of a multimedia installation created by researcher and artist Nicole Piepenbrink, it is putting a public spotlight on some historical facts that many at the iconic 1759 church became aware of only recently.

Darby Vassall, son of Tony and Cuba, was born in 1769 into enslavement by the Vassall family, early benefactors of Christ Church. After slavery was made unlawful in Massachusetts in 1783, he went on to become a leader in Boston’s Black community, helping to found a mutual aid society for Black Bostonians, petitioning for state funding for Black children’s schooling and advocating all his life for equal rights and abolition of slavery. No one knows why, but it was Darby Vassall’s choice to be buried in the Vassall family tomb under Christ Church’s sanctuary.

None of the four published histories about Christ Church mention the origins of money used to fund the church’s construction, maintenance and growth, even as the slave trade and its related enterprises continued to enrich church benefactors into the 19th century.

Piepenbrink started her “Here Lies Darby Vassall” thesis project two years ago at Harvard University’s Graduate School of Design with “an interest in looking at how spatial conditions of church buildings with historic designations tell selective stories about the past. Stories that continue to shape our psyches, influence our actions and perpetuate injustices in the present,” she said during a church ceremony at the film installation’s launch.

“Analyzing the spatial conditions of Christ Church revealed that the only physical marker on this site that nods to the history of slavery can be found on a framed sheet of paper positioned at the back of the Vassall tomb in the basement. One and a half lines state that Darby Vassall, son of Tony Vassall, is buried in the tomb.”

Christ Church’s rector, the Rev. Kate Ekrem, said the film project is a first step in the parish’s efforts to acknowledge and reckon with its “entanglement in the legacy of slavery.”

“Here Lies Darby Vassall” will play for the public on Christ Church’s outdoor screen on a loop, daily from 6 to 8 p.m. through All Saints Sunday, Nov. 6. It is also available for viewing on the project website, hereliesdarbyvassall.art. 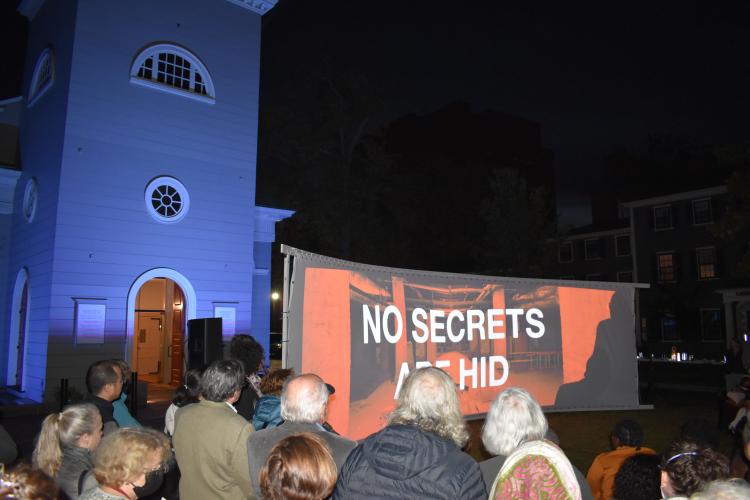 The “Here Lies Darby Vassall” film had its outdoor premiere at Christ Church in Cambridge on Oct. 12, the anniversary of his death. Photo: Tracy J. Sukraw/Diocese of Massachusetts

One of Darby Vassall’s living descendants is Dennis Lloyd, a Roxbury native who is retired and now lives in Atlanta and serves on the vestry at St. Paul’s Church there. During a group interview in August via Zoom that included his daughter Egypt, Nicole Piepenbrink and leaders of Christ Church’s Racial Justice Group, Lloyd recalled first visiting Christ Church in the 1960s for the wedding of the late Rev. Neal Hastie, whom he knew through Hastie’s youth organizing efforts in Roxbury.

“I remember sitting in the back,” Lloyd recalled. “I would never have realized that years later there would be a connection made to my family being at Christ Church, that my great-great-grandfather, a slave descendant, was buried there. So that was a revelation.”

Ted Hammett, a co-facilitator of the Christ Church Racial Justice Group, described what a revelation it was for the parish, too, when Alden Fosset, Kellogg Fellow at the Episcopal Chaplaincy at Harvard, preached a sermon late last year about Darby Vassall.

“I’ve been a member of Christ Church since 1986 and that was the first I knew that there was a formerly enslaved person buried under our church. I think that was true for many of our parishioners. That was for many of us a really amazing and jarring discovery,” Hammett said.

David Brancazio, who also co-facilitates the Racial Justice Group, added that, for him, awareness of slavery’s local legacy has been a slow dawning. “I’m embarrassed to say this, but I had no idea that slavery was even being enforced in New England, and through this project I’ve learned that not only was slavery alive and well but the slave trade and money from it was a primary source of wealth in New England. That was just sort of stunning to me. I hope that this project helps educate the Boston public about our true history.” 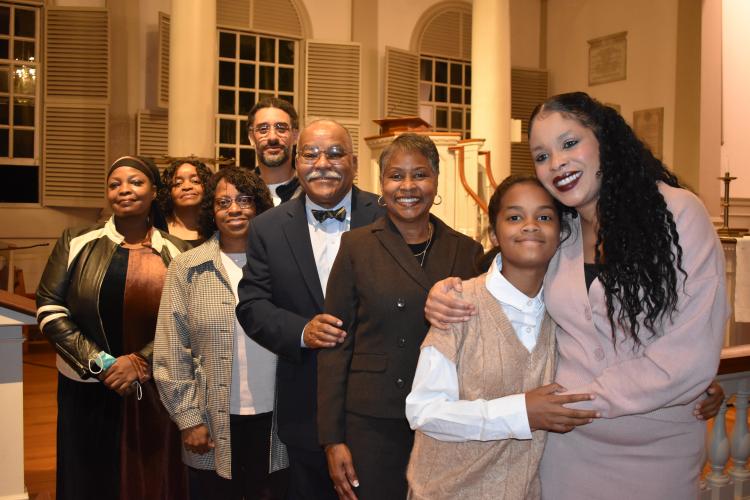 Last year, Lloyd and his family founded the Slave Legacy History Coalition to help families descended from enslaved people, and others, connect with repositories of slave legacy history in Boston and Cambridge.

It, along with projects like “Here Lies Darby Vassall,” he said, “bring into present form the commitment that people have to elevate and not lose that history because it’s so important. 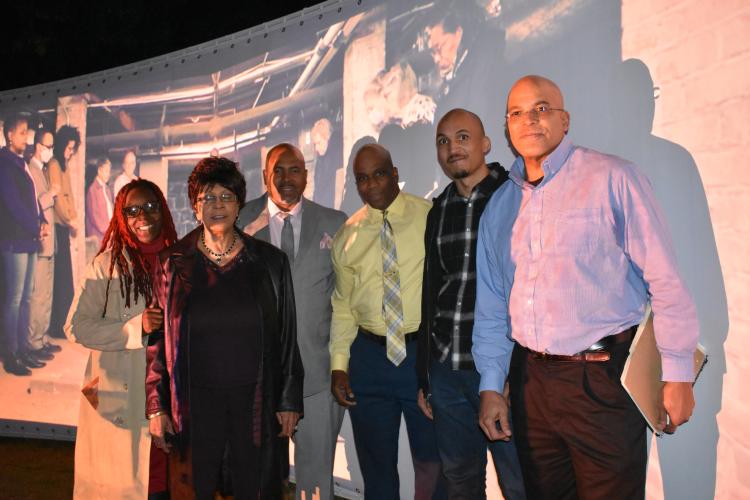 Piepenbrink said that the “Here Lies Darby Vassall” project has been personally transformational.

“When I first started looking through archives, specifically primary source archival documents related to Christ Church, my question was, OK, who was enslaving or participating in the slave trade or benefiting from it? I’m going to find those people, starting with names like Benjamin Faneuil, the brother of Peter Faneuil, who was a parishioner at Christ Church and had a pew.

“As I continued moving through the archives, at first my jaw was just constantly dropping with how many names there were. My question totally changed from who was to who wasn’t. The exceptions were not the folks profiting from participating; the exceptions were the ones who weren’t.”

Where is Jesus in all this?

“I guess the question for me is, where is Jesus not in this?” Piepenbrink said. “I’m so compelled by the life of Jesus and his example towards exactly this kind of thing. I was just reflecting earlier on Isaiah 61, and I believe in things like liberty for the captives, the oil of gladness for those who mourn, the restoration of ruins. This is God’s heart, you know?”

During an interview at the church in July, Ekrem acknowledged that reckoning with racial injustice is hard work, and that a discussion forum after church on a recent Sunday had been helpful and important for her congregation. “It’s going to stir up uncomfortable feelings and we have to be able to face that,” she said.

Her advice to other congregations wanting to begin a similar journey is to find a place to start, and then just start.

“There’s no perfect way to do it. I just feel like we can’t get paralyzed by our fear that we’re not going to do it the correct way or that we’re going to get criticized,” Ekrem said.

In addition to diocesan resources that are available, she said, “I would really encourage parishes to connect with other parishes already doing this work. And then, for us, also reaching out to our neighbor churches in our local community who share this history has been helpful.  You’re not in this alone.”

Christ Church is partnering with nearby First Church, Congregational and First Parish, Unitarian Universalist, as well as the Episcopal Chaplaincy at Harvard, for neighborhood walking tours and a Nov. 5 retreat day focused on learning and reflecting together about the legacy of slavery.

“The truth will set you free,” Dennis Lloyd said in response, “and the truth is, we’re talking about it now, we’re all here. We can’t right every wrong, but what we can do is move forward together collectively.”