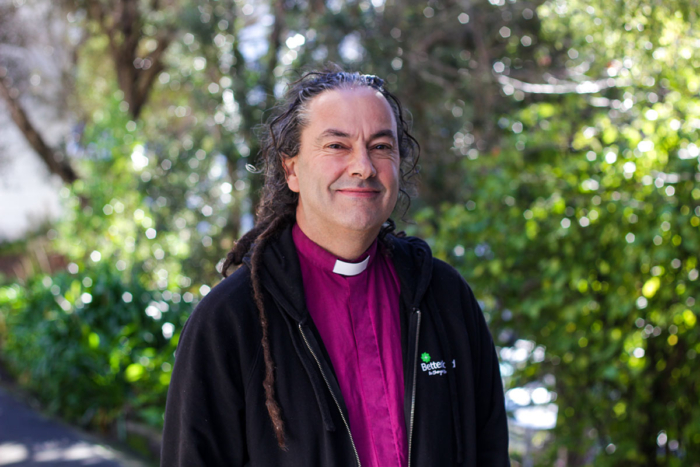 Wellington Bishop Justin Duckworth has served the diocese since 2012. Photo: Diocese of Wellington

[Episcopal News Service] A dreadlocked cleric usually seen walking barefoot has marked 10 years as bishop of the Anglican Diocese of Wellington, in New Zealand’s capital city. He is now seeking to extend his ministry, to work more with local communities and more effectively represent the church’s mission, but he’s not cutting off the dreadlocks just yet.

The Rt. Rev. Justin Duckworth, 54, was consecrated in 2012 after never having been to a General Synod or having served as a parish priest. Seven years prior, he was not even ordained, and not an Anglican.

Now that Duckworth has completed his first decade heading what he describes as a “healthy, growing and just” church, he aims to work locally to “disperse the gospel to every community.”

“Our ecclesiology is that we want to be present in every neighbourhood, a beautiful agent of transformation in our communities, and a voice for the margins,” he said.

The Wellington diocese, Duckworth said, represents “hundreds of different communities” and over the past 10 years, the church has become more missional and more confident in working closely with them.

“I feel like now 10 years on, it’s time to get a little bit more back into that outward-facing stuff,” he said. “Every community should have a representation of the gospel that can bear witness to the risen Christ and his transforming power.”

Duckworth had to quickly grasp the inner mechanisms of the Anglican system when he moved from the back pews to the front row.

“I’d never gone to a whole two-day synod in my life, and I didn’t know any of the structures,” he said. “I was so far out of the system – now I’m so far into it.”

Ordained in 2006, Duckworth attended a Baptist church after he joined Youth for Christ, a nationwide Christian youth group, as a teenager, where he met his wife Jenny.

His earlier ministry centred on living alongside sex workers, the homeless and others on society’s margins. The Duckworths established communal homes in poor or disadvantaged parts of Wellington. In 1996 they extended this ministry and formed Urban Vision to reach “the lost the last and the least.” In 2008, Urban Vision became an Anglican missionary order, with Duckworth still serving on its leadership team.

The bishop rarely wears a mitre, as it doesn’t fit comfortably over his thick dreadlocks; and apart from the occasional football game, school visit or funeral, he has not worn shoes since his late teens.

“Formal schools tend to love shoes – and if I’ve got the mitre on, I spend my whole time wondering if it is going to fall off.”

Last month he presided over a national memorial service at Wellington’s Cathedral of St. Paul to mark the death of Queen Elizabeth II, and her seven-decade reign as the country’s head of state. New Zealand is considered a constitutional monarchy, over which the queen was sovereign.

Earlier this year, in February, thousands of protesters camped outside parliament for three weeks in opposition to the government’s COVID-19 mandates. Duckworth described it as an “interesting and privileged situation” on his doorstep where the church was “yeast, salt and light.”

“People were not feeling listened to by politicians, but every day we listened to and prayed for many people, and that was an incredible privilege,” even though, he said, while the diocese did not support the cause, it supported the protesters right to protest.

The cathedral was one of the only venues open inside a police cordon that prevented vehicular access to the area. Some protesters attended midday Eucharists on the cathedral steps. At that time there were gathering limits of 25 unvaccinated people – and 100 if all were vaccinated – due to state-sanctioned vaccine mandates during the COVID-19 pandemic.

The government’s director-general of health, Ashley Bloomfield, deemed religious gatherings “high risk” as many are attended by those who are elderly and immune-compromised.

Protesters, most of whom were not vaccinated against COVID-19, also unlawfully camped on cathedral grounds, and regularly used church toilets.

“We took pastoral responsibility for those on our land,” Duckworth said. “Some came up to us and said, ‘just letting you know we are camping on your land.’ Obviously, we were not giving them permission, but we really appreciated the fact they informed us.  We thought them using our kitchens would be enabling the protesters, but using the toilets was a good pastoral response.”

Duckworth may still be seen as an unlikely-looking person as a church leader; he has discussed cutting off his dreadlocks to raise money for charity.

“Yes, $100,000 and the bishop will take his dreads off – there must be a fundraising thing there for some cause,” he said.

“Also, I’m wondering whether if in time I cut them off and they become relics, they could be placed in a pilgrimage where people can go to find “the dreadlocks of the bishop”.

— Dave Crampton is a New Zealand-based journalist. He has written for publications worldwide, including Anglican Communion News Service and Christianity Today and he also covers sports for Newsroom.