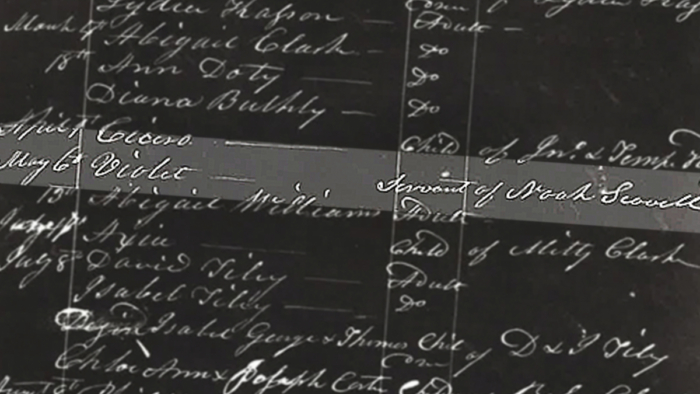 A church register from the 1790s records the baptism of a slave Violet, identified as a “servant” of Noah Scovell. Photo: St. John’s Episcopal Church

[Episcopal News Service] An Episcopal church in Connecticut on Oct. 29 will dedicate its first “witness stone,” a small memorial to an enslaved woman who was baptized at the church, as part of a regional nonprofit’s efforts to share the stories of enslaved people in the places they once lived and worshipped.

St. John’s Episcopal Church in Essex will memorialize the woman, Violet, with a stone marker to be placed in a prominent spot in the meditation garden in front of the church. Through its research, supported by the Witness Stones Project, the congregation determined Violet was born in 1775, was enslaved by St. John’s member Noah Scovell and became a baptized member of the church before escaping in 1802.

The witness stone bearing Violet’s story will become one of more than 125 such markers overseen by the Witness Stone Project. The New Britain-based nonprofit has been most active in establishing stones in Connecticut while also supporting community research and education projects in Massachusetts, Rhode Island, New York and New Jersey.

The witness stone at St. John’s will be the first in Essex, and “the hope is that it will just continue to grow,” said the Rev. Kate Wesch, St. John’s rector. She told Episcopal News Service that parish volunteers began last year studying church registers from the 1790s and found at least three enslaved people had been baptized at St. John’s.

“Nobody had really looked at [the register] with that specific goal in mind, to look for enslaved people who had been baptized,” Wesch said. “That really kicked off our project.”

The Rev. Geoffrey Smith, a former deacon at the church who also serves as The Episcopal Church’s chief operating officer, was an early proponent of the effort. After the church partnered with the Witness Stones Project, much of the research was conducted by Jim Myslik, a parishioner who had experience studying family genealogies.

Myslik will be among the presenters on Oct. 29 during the dedication ceremony. It also will feature performances of music composed by Sawney Freeman, who was born into slavery but emancipated in the 1790s. St. John’s music director Anthony Pandolfe transcribed some of Freeman’s compositions from the original manuscripts.

“Playing these 200-year-old compositions is like taking a step back in time to the simpler harmonies and genres that were the vernacular of that era,” Pandolfe said in a church news release. “Sawney’s music is something tangible and brings his story alive as we attempt to see a window into his heart as he penned these compositions.”

After the dedication ceremony, participants will process to Riverview Cemetery, where Freeman and his relatives are buried.

Freeman, who lived in the same era as Violet, was not a member of St. John’s. The other two enslaved individuals found to have been baptized at St. John’s lived in neighboring communities, not in Essex, Wesch said. Witness Stones may offer opportunities in the future to honor those individuals in the communities and locations more closely connected to their lives.

Slavery, though primarily an economic system of the Southern states through the Civil War, was present throughout Colonial America and the early United States, including New England. In Connecticut, slavery continued until 1848, after a decades-long decline brought on by the passage of a law in 1784 that freed children born into slavery when they turned 25.

The first census of the United States, in 1790, counted nearly 3,000 slaves living in Connecticut, the most of any New England state.

“All stories deserve to be told,” Melissa Josefiak, director of the Essex Historical Society, said in the St. John’s news release. “Our work with primary sources and collaborative partners helps us bring those previously unheard voices to life.”

As another phase of the project, Valley Regional High School students will help expand on Violet’s story through a local history course planned for the spring. They will study primary historical documents, conduct additional research and engage with the history through creative writing and art.

Wesch said the church’s participation in the Witness Stones Project is a way to “demonstrate that the lived experiences of all of God’s people are worthy of remembrance.”