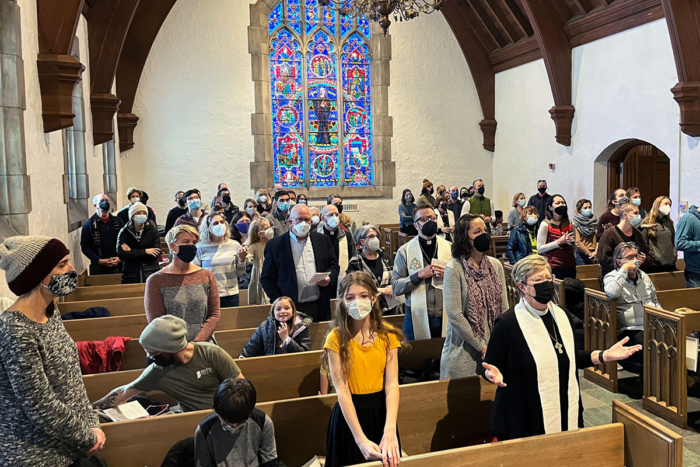 The Table, a congregation in Indianapolis, Indiana, that started as a church plant of the Anglican Church in North America, voted 44-4 to leave the theologically conservative denomination and affiliate with The Episcopal Church. Photo: The Table

[Episcopal News Service] A congregation in Indianapolis, Indiana, that began as a church plant of the Anglican Church in North America, or ACNA, announced this week that it is leaving ACNA to join The Episcopal Church, citing several differences with ACNA’s approach to the faith.

“We sensed there was better alignment” with The Episcopal Church, the Rev. Ben Sternke, co-rector of The Table, said Oct. 3 in an online announcement. He listed four specific reasons for the decision to affiliate with The Episcopal Church, including his congregation’s commitment to social and racial justice work and its belief in “big tent” spirituality and “a resilient, non-reactive, non-anxious Christianity.”

After a period of discernment of more than a year, the congregation voted 44-4 to disaffiliate from ACNA, Sternke said. The congregation’s other two co-rectors are the Rev. Spencer Ruark and the Rev. Matt Tebbe.

“We have begun the process of applying to be an affiliated ministry of The Episcopal Church, which is a designation that provides time and space for us to move toward full membership as a parish of the Diocese of Indianapolis,” Sternke said.

The Table was created in 2015, and the congregation now worships in space provided by Broadway United Methodist Church on East 29th Street in Indianapolis. The congregation is applying to become a missional community in the Episcopal diocese, Indianapolis Bishop Jennifer Baskerville-Burrows said in an Oct. 3 statement to the diocese.

“I give thanks for their willingness to set out on this journey and for their care for The Table’s congregation in the midst of this change,” Baskerville-Burrows said. The congregation and its leadership, she said, has shown “a strong and faithful call to the Episcopal Church, and a hunger for deep formation and enculturation in our traditions and practices.”

Baskerville-Burrows said she has conferred with Presiding Bishop Michael Curry and churchwide staff to ensure the diocese follows canonical processes for welcoming The Table – and to ensure the diocese proceeds “with love and respect for our siblings in Christ who have endured the pain and hardship of schism and property lawsuits with ACNA.”

ACNA dates to 2008, when a group of former Episcopalians sought to form a new, conservative province of the Anglican Communion after leaving The Episcopal Church over theological disagreements, particularly their objections to women’s ordination and greater LGBTQ+ inclusion in the church. The 2003 consecration of New Hampshire Bishop Gene Robinson as the first openly gay bishop in The Episcopal Church was a primary catalyst for the schisms that emerged during the subsequent decade. Since then, ACNA has not succeeded in its goal of being recognized as an province of the worldwide Anglican Communion.

The ACNA diocese that The Table left, known as Churches for the Sake of Others, or C4SO, was created in 2009 as an ACNA church-planting movement and became a diocese in June 2013, so the ACNA founders’ initial breaks with The Episcopal Church mostly predated the diocese’s history.

It also is not a geographically specific diocese, with congregations spread across the United States and organized into regional deaneries.

Baskerville-Burrows said she spoke with Bishop Todd Hunter, the ACNA diocese’s bishop, about The Table’s shift in affiliation, and “[I] am assured that he intends for their transition to be peaceful and free of conflict.”

Hunter sent a letter to the diocese’s clergy saying he would “release this parish into the care of The Episcopal Diocese of Indianapolis.”

“In many honest conversations, [the rectors] told me they felt they may be better aligned with The Episcopal Church on several key issues than they are with the Diocese of C4SO and the Anglican Church in North America, and I agreed,” Hunter said. “I count Matt, Ben and Spencer as friends, and we share mutual passions for the full flourishing of God’s kingdom.”