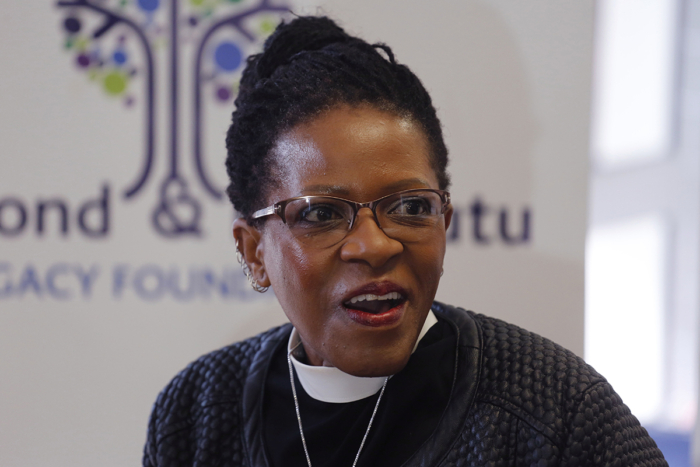 The Rev. Mpho Tutu van Furth, daughter of the late Archbishop Desmond Tutu, was told she could not preside at the funeral of a close family friend because of the Church of England’s prohibition on gay and lesbian clergy in non-celibate relationships. Photo: Associated Press

[Episcopal News Service] The Church of England is facing sharp criticism from supporters of greater LGBTQ+ inclusion in the church after the daughter of the late-Archbishop Desmond Tutu was barred from presiding at a church funeral in England because she is married to a woman.

The Rev. Mpho Tutu van Furth, who now serves as a priest in the Netherlands, was ordained in The Episcopal Church in 2004. Although the United States-based church has long welcomed gay and lesbian clergy and in 2015 approved marriage rites for use by same-sex couples, the Church of England maintains that marriage is only between a man and a woman and requires gay and lesbian clergy to remain celibate.

The Episcopal Church and Church of England are two independent member provinces of the worldwide Anglican Communion.

Tutu van Furth had been invited to preside Sept. 22 at the funeral of her godfather, Martin Kenyon, a close friend of her father who died this month at 92. The funeral was to be held at St. Michael and All Angels Church in Wentnor, but the Diocese of Hereford reportedly intervened, saying that Tutu van Furth could attend the funeral but not preside, based on “House of Bishops current guidance on same-sex marriage.”

The Church of England’s decision “seemed really churlish and hurtful,” Tutu van Furth told BBC News. Kenyon’s family instead moved the funeral to another nearby location so Tutu van Furth could preside.

Bishop Paul Bayes, a former bishop of Liverpool who has pushed the Church of England to adopt more progressive and welcoming positions on sexuality, argued that the status quo is not good enough. “We urgently need to make space for conscience, space for pastoral care and space for love,” Bayes told BBC News.

The controversy come as the Church of England is grappling with internal divisions over its traditional stance against same-sex marriage as it prepares for its General Synod in February.

Desmond Tutu died in December 2021 at 90. As Anglican archbishop of Cape Town, he was a pivotal leader in the campaign to end apartheid in South Africa in the 1980s, for which he received the Nobel Prize. At the time, his daughter was studying mechanical engineering at Howard University in Washington, D.C., after growing up in apartheid South Africa.

Mpho Tutu van Furth later remained in the United States, working in the nonprofit sector and volunteering in an Episcopal church in Massachusetts, according to a 2004 Washington Post story. Her then-husband, Joseph Burris, was a Boston sportswriter. They had two children before divorcing.

In 1999, she entered Episcopal Divinity School in Cambridge, and in June 2003 at age 39, she was ordained to the transitional diaconate at Christ Church Cathedral in Springfield, Diocese of Western Massachusetts.

“I’ve had the example of two parents who’ve had very lively ministries of their own,” she said in a news conference after her ordination. “I’ve always felt that my home is the church. This is the place that I’ve always sought out. If I didn’t feel a call by God to an ordained ministry then I couldn’t do it.”

In January 2004, she was ordained into the priesthood along with three other new priests by her father in a ceremony held at Christ Episcopal Church in Alexandria, Virginia.

Her famous father took up the cause of LGBTQ+ rights later in life, saying at a 2013 event, “I would not worship a God who is homophobic. … I am as passionate about this campaign as I ever was about apartheid. For me, it is at the same level.”

Tutu van Furth returned to South Africa in 2011 to serve as the founding director of the Desmond and Leah Tutu Legacy Foundation. In 2015, after she and her husband split, she married Marceline van Furth, a Dutch academic, in a civil wedding held in the Netherlands. The next year, the South African church told her she no longer could serve as a priest there. South Africa legalized same-sex marriage in 2006, but such unions and ceremonies still are not allowed within the Anglican province’s churches.

“It felt incredibly sad,” Tutu van Furth told the Guardian at the time. “My father campaigned for women’s ordination, and so every time I stand at the altar I know that this is part of his legacy. And it is painful, a very odd pain, to step down, to step back from exercising my priestly ministry.”

This month, after the Church of England refused to allow Tutu van Furth to preside at a funeral in one of its churches, the Tutu Legacy Foundation issued a statement expressing dismay at the church’s “callous position.”

“The church has again taken a position that undermines the safety, dignity, and value of members of the LGBTQIA community, and all human beings,” the foundation said.