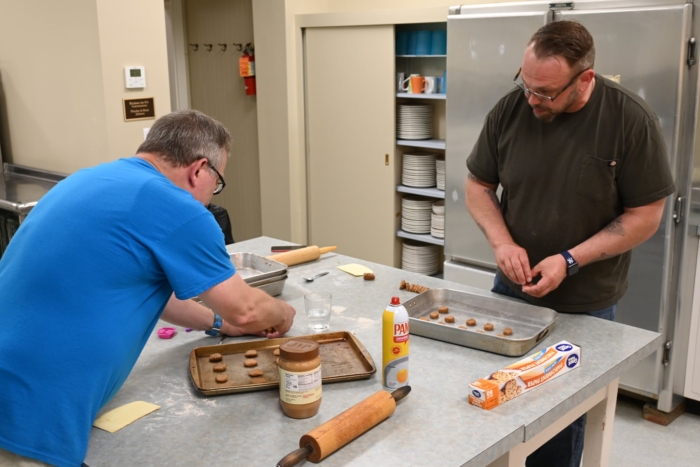 [Episcopal News Service] A partnership involving an upstate New York church’s initiative and a nonprofit mental health association to help people suffering from addiction or mental illness reenter the workforce has received a $500,000 grant to continue and expand its work.

Father Bernard’s Blessed Biscuits, a social enterprise operated by St. Luke’s Episcopal Church in Jamestown, is one of the Mental Health Association in Chautauqua County’s many community partners, and the grant is expected to help the program reach more people.

MHA – a countywide chapter of a national nonprofit – offers a variety of treatment, recovery and reentry programs. The Rev. Luke Fodor, St. Luke’s rector, created Father Bernard’s Blessed Biscuits, an enterprise that employs MHA clients to make all-natural dog biscuits. The grant from the Appalachian Regional Commission will allow MHA to hire more staff, who can process and refer more clients to Father Bernard’s, which in turn will enable a more consistent output.

The grant award was celebrated at a reception on Sept. 20, where Fodor and other MHA partners were joined by local and state officials and the Rt. Rev. Sean Rowe, who serves both the dioceses of Western New York and Northwestern Pennsylvania. 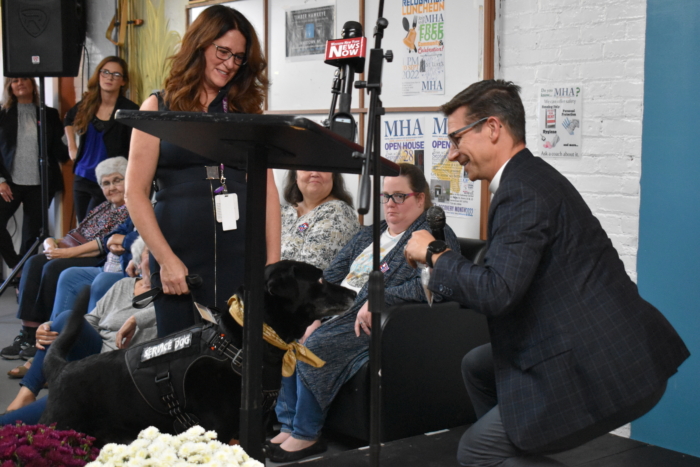 “Jesus tells us to seek the one who is lost, and in this part of the country, that often means finding ways to help reclaim lives and livelihoods that have been decimated by addiction and poverty,” Rowe told Episcopal News Service. “St. Luke’s in Jamestown is doing this Gospel work through its partnership with the Mental Health Association. They’re helping people rebuild their lives when addiction has robbed them of opportunity and offering a path to the wholeness that God wants for all of us.”

Father Bernard’s, inspired by the Rev. Greg Boyle’s Homeboy Industries project in Los Angeles, California, provides clients with job experience, training and a supportive community – an “ecosystem of connection,” as Fodor calls it. St. Luke’s pilot program was funded by an earlier MHA grant, but it wasn’t initially intended to sustain longer-term jobs. Typically, clients have participated for a few weeks as they are coming out of jail and transitioning through drug courts, Fodor said. He hopes that this grant, which will be shared among MHA’s other programs, will increase MHA’s capacity to process clients and direct them to Father Bernard’s for stable employment.

State and local governments have recently started prioritizing employment reentry programs and partnerships like MHA and Father Bernard’s in order to help people who fall through the cracks after being released from jail, when few employers will hire them. The Mental Health Association previously received $1 million from the Empire State Poverty Reduction Initiative.

The Appalachian Regional Commission that awarded the most recent grant is a federal-state organization that works to improve living standards primarily by creating sustainable economic opportunities in Appalachia, which extends from the Southern Tier of New York, where Jamestown is, to Georgia. Jamestown was an industrial powerhouse in the 20th century, manufacturing furniture, tools, appliances and voting machines. But, as with much of Appalachia and the Upper Midwest, the industries that had provided stable, good-paying work for decades began leaving town in the mid-20th century, followed by many residents. The population declined from 45,000 in 1930 to 28,000 in 2020.

By 2020, Jamestown’s poverty rate was 28.5%, about twice the rate of New York State. Over the past five years, drug overdose deaths in the city have surged, in line with national trends. That combination of factors has created a cycle of poverty, addiction and crime, with few pathways out.

“Here in this region, where we wrestle every day with some of the country’s most intractable issues – like opioids, poverty and economic decline — these kinds of church-community partnerships are essential to our ministry. The people of St. Luke’s are showing us all how to be faithful stewards in difficult times,” Rowe told ENS.

The partnership between St. Luke’s and MHA has evolved through personal connections and shared goals. MHA’s executive director, Steven Cobb, serves on the vestry at St. Luke’s. After falling into a cycle of drug addiction and homelessness in New York City, Cobb moved to Jamestown and found a home at St. Luke’s during his recovery, becoming increasingly involved in parish leadership. Cobb was a success story, but Fodor said his experience revealed a deeper problem in Jamestown.

“It was clear that there was a need in our community to work with people who are more marginalized and stigmatized, people who are [struggling] with their mental health or chaotic drug usage,” Fodor told ENS.

Churches are theoretically well-suited for this work, he said, but in practice, that work rarely goes far enough.

“They end up pushed to the back and no one really wants to welcome them in, and it’s fine for them to be part of a recovery community here or there – yeah, you can come to our church and be part of the Narcotics Anonymous group, but there’s not a full level of integration that happens,” he said.

Working with Cobb and learning more about the plight of those caught in the cycle of addiction, mental illness, poverty and the “loneliness epidemic,” Fodor started thinking of ways for churches to do more to integrate marginalized people into their community.

“It’s often said that the opposite of addiction is connection,” Fodor told ENS. “I think that the role the church has to play is to create connection spaces where people can find greater meaning for their lives.”

At the grant award ceremony, Fodor emphasized that these connections take some time to build, but the grant is a sign that they are going in the right direction.

“Our whole community often feels marginalized,” Fodor said at the event. “We feel left behind here in Western New York. The fact that the federal government saw fit to see us, I think, is an immediate impact. It helps us to realize that we’re not alone. Instead of panicking or being too anxious, we can realize that the resources are there. It takes time, but we’re working on it.’