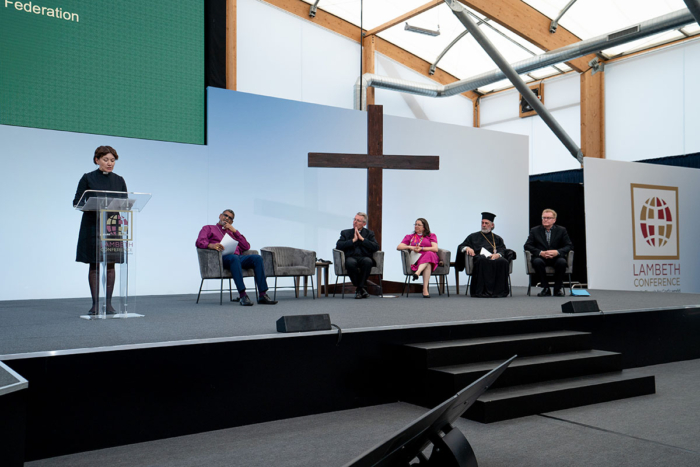 [Episcopal News Service – Canterbury, England] Planners of this Lambeth Conference have sought to emphasize points of internal unity across the Anglican Communion’s 42 global provinces through their shared Christian faith, despite deep divisions over human sexuality. On Aug. 4, the more than 650 bishops who are gathered here at the University of Kent widened their focus to striving for unity among all Christian denominations, as well as efforts to bridge gaps between Christians and people of other faiths.

The day’s two plenaries featured panelists sharing their experiences with ecumenical and interfaith relations, and the bishops’ closed session later in the day took up two corresponding Lambeth Calls, which are the documents this conference is using to initiate discussion while recommending action items for bishops when they return to their provinces and dioceses.

“The disunity of the Church is a continuing and damaging wound in the body of Christ,” the Lambeth Call on Christian Unity says, referencing a century of history of ecumenical work since “An Appeal to all Christian People” was issued by the 1920 Lambeth Conference. The Christian Unity Call, however, says progress has slowed in recent years, limiting Christian churches’ ability to more closely share in ministries and sacraments, including Communion. Also at stake is shared Christian witness for reconciliation “at a time when in many parts of the world, government regulation, persecution and even terrorism make Christians vulnerable in their life and witness.”

“Despite our divisions, we recognize in other Christian churches the fruitfulness of the work of the Holy Spirit, commitment to the proclamation of the Gospel and loyalty to Jesus’ institution of the Sacraments that we cherish in our own lives,” the Christian Unity Call says.

The presence of some 40 representatives from other churches, Christian organizations and ecumenical partners could be seen as a sign of hope. Those individuals have joined or plan to join the Anglican bishops meeting at the University of Kent through Aug. 8, and several guests were welcomed as panelists for the first plenary of this ninth day of the conference.

Roman Catholic Cardinal Kurt Koch, prefect of the dicastery for promoting Christian unity, was unable to attend the Lambeth Conference in person, but he submitted a written statement that was read on his behalf by the Rev. Anthony Currer. It referenced the Lambeth Conference theme, “God’s Church for God’s World,” which was chosen by Archbishop of Canterbury Justin Welby, who is convening the conference.

“This motto can only be true to its meaning if the church can undertake its global mission in reconciled form,” Koch said in his statement, which examined some of the challenges in improving ecumenical relations. “We need a common vision, because we shall grow further apart if we do not aim towards a common goal.”

David Wells, vice chair of the Pentecostal World Fellowship, also spoke of the challenges and benefits of ecumenism.

“Spiritual ecumenism has assisted us in coming more and more to the table,” Wells said of his church. He acknowledged that when denominations focus only on their own Christian practices, “one can end up with a fixed set of identity, and it can lead to a myopic view of the family of God and from it sometimes arises arrogance and judgement.” Christian churches can hold on to their core beliefs, he said, but also “understand that there is so much more to learn from our other brothers and sisters.”

Two other panelists highlighted the ways members of the global Christian church can respond together to the issues of the day. Greek Orthodox Archbishop Nikitas of Thyateira and Great Britain cited the example of human trafficking and modern forms of slavery. “The sins of the past are alive and thriving in a modern world that dares to speak of human rights, justice and truth,” the archbishop said. “It is therefore time for us as Christians to unify our efforts and do what is required by God to speak out against injustice and every evil.”

And representing the Episcopal Anglican Church of Brazil, the Rt. Rev. Marinez Bassotto, bishop of the Amazon, described some of her diocese’s recent work with ecumenical partners to support the rights of Indigenous peoples. They have been oppressed by a government that allows continued abuse by corporations hungry for their land and its resources, she said.

“The church is a witness, that only through unconditional respect is it possible to live according to Christ,” Bassotto said through an interpreter. 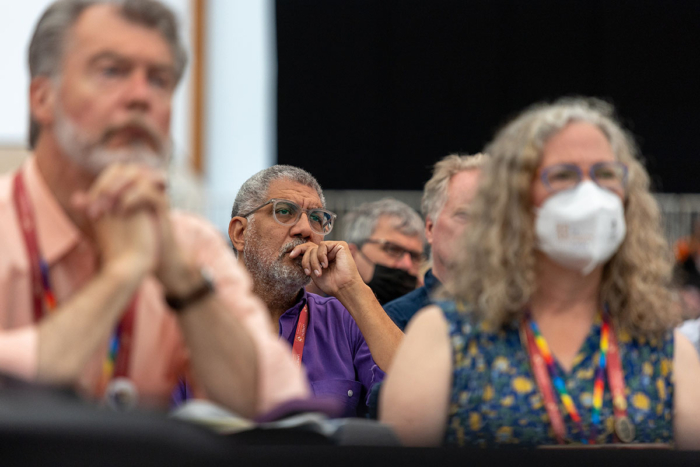 Reference to the breakaway Anglican groups that have formed their own provinces over theological and doctrinal disagreements, particularly their opposition to full LGBTQ+ inclusion in the life of the church, was absent from these official discussions. The Anglican Church in North America, or ACNA, and the Anglican Church in Brazil are not recognized as member provinces of the Anglican Communion, though they still maintain relationships with some of the communion’s more conservative provinces and bishops.

Welby had invited ACNA to attend this Lambeth Conference, but as an observer. ACNA Archbishop Foley Beach responded by refusing to participate, “as long as the Archbishop of Canterbury is inviting bishops to Lambeth who are living in immorality and continuing to tear the fabric of the Communion.”

Other Christian churches were invited to attend as ecumenical observes or participants, but there is no such easy or established category for churches that are made up largely of breakaway groups of former members of the Anglican Communion. “You can’t put the Anglican Church of North America in the same box as the Greek Orthodox Church,” Adam said.

Bishop John Bauerschmidt of the Episcopal Diocese of Tennessee, in an interview with ENS, said he wasn’t aware of any Episcopal or Anglican dialogue underway with ACNA, but like Adam, he expressed a hope for the future. Bauerschmidt is a member of a group of conservative Episcopal and Canadian Anglican bishops known as the Communion Partners.

“Sometimes, it’s those who are closest to us where there’s the most friction,” he said, noting that many ACNA clergy are former Episcopal clergy. “There’s a new generation in each church that doesn’t share that history and doesn’t share the history of conflict either, so there will be a new day in the relationship between our churches as there’s a generational change. That would be my hope and prayer.”

Bauerschmidt, who also served last month on the 80th General Convention’s Committee on Ecumenical and Interreligious Relations, said he was pleased that this Lambeth Conference gave such a high profile to Christian unity. “People sometimes talk about an ‘ecumenical winter,’” he said. “I think that the ecumenical winter is beginning to thaw.”

He pointed to examples of what is known as “receptive ecumenism” through organizations and initiatives like the World Council of Churches and the Anglican-Roman Catholic International Commission. “It’s a kind of willingness to see the gifts that each other brings that help build up both churches,” he said. 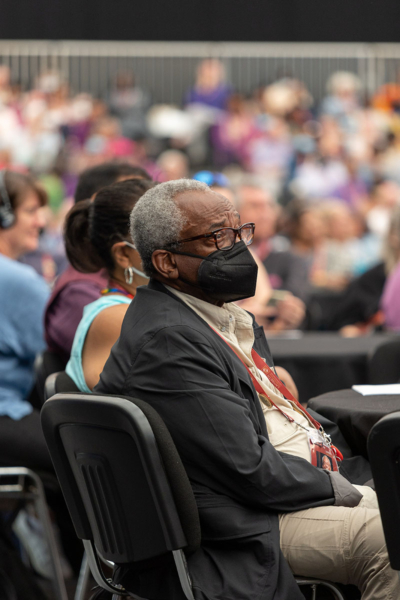 As for interfaith relations, “it would be a mistake for Christians to simply concentrate on their own dialogue within the Christian family,” Bauerschmidt said. “We must be aware of what’s happening in other religious traditions.”

The afternoon plenary on interfaith relations was titled “Hospitality and Generosity.” The keynote speaker, Chelmsford Bishop Guli Francis-Dehqani of the Church of England, shared her childhood experience as a Christian refugee. Her family fled Iran when she was 14 in response to the 1979 Iranian Revolution. Her father was the Anglican bishop of the diocese in Iran, and her brother was killed there, presumably because of his connection to the church.

And yet, Francis-Dehqani said, she felt called by her Christian faith to unravel the paradox of Christian engagement with other faiths “when elements within those faiths wish us harm.” She came to believe that “the evils which have befallen the church are not a reflection of the whole Islamic faith,” she said, just as the violence of the medieval Crusades and today’s Christian nationalist movements are not a reflection of the whole Christian faith.

The Lambeth Call on Inter Faith Relations alludes to the sometimes dramatic difference in contexts in which Anglicans around the globe interact with people of other faiths.

“For some in the Anglican Communion there is the freedom to call people into baptism and discipleship, and our neighbors of other religious traditions can also become partners in work for the common good, tackling areas of shared concern such as the pandemic or climate change,” the call states. “In some contexts, however, Anglicans face hostility and even persecution.”

Lambeth Interfaith session: reflections from Egypt, Kenya, India, Canada and England reflect on the joys and the challenge of relations with the world faiths. Affirm the rejection of prejudice, loving our neighbour,witnessing to Christ and holding faith courageously listening. pic.twitter.com/eblee1sScP

In the morning news briefing before the plenaries, Francis-Dehqani said that she finds hope rather than trouble in the variety of global faiths.

“As human beings we’re hard-wired to be drawn more naturally to people who are like ourselves,” she said. “[When] actually, we’re much more enriched when we engage with people who are different from ourselves, and we begin to get the sense of seeing the world through their eyes and understanding their experiences. It’s more difficult, but I do think it’s more enriching – and far more connects us as human beings.”