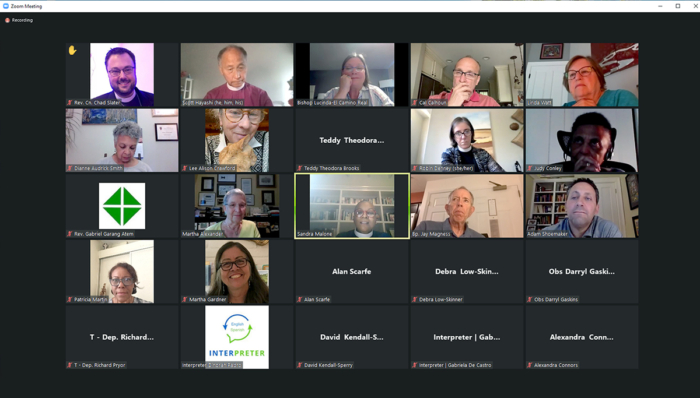 The legislative committees on World Mission hear testimony on six resolutions during an online hearing on June 23.

[Episcopal News Service] The legislative committees on World Mission heard testimony June 23 on six resolutions, five of which were proposed by the Standing Commission on World Mission. Three of the five deal with how Episcopalians engage with, or learn about, mission efforts around the world, and the other two commend the work of two organizations engaged in global mission. The sixth resolution notes the upcoming 80th anniversary of the ordination of the Rev. Florence Li Tim-Oi of Hong Kong, the first woman ordained a priest in the Anglican Communion.

Two of the resolutions previously had a hearing in May, but they and the other four had a number of people testifying in favor at its more recent online meeting.

Overarching the standing commission’s efforts is A016, which encompasses the Way of Love and provides a set of guiding principles for mission for Episcopalians as they work alongside those in other countries “in mutual discovery and deepening of God’s reconciling love.” The resolution also calls for the appointment of a Global Mission Advocate in every diocese, jurisdiction, seminary and diocesan school of ministry, whose job is to promote the guiding principles.

The Rev. Titus Presler, executive director of the Global Episcopal Mission Network, applauded the new guiding principles, saying they “seek to replace the transactional approach to mission with an approach of building relationships of mutuality and companionship.” Helena Mbele-Mbong, a standing commission member from the Convocation of Episcopal Churches in Europe, said that mission efforts of The Episcopal Church have come a long way from the earliest days of sending missionaries. “Fortunately, we have learned over the years that we are not bringers of something good and better, but rather companions,” she said.

Both the bishops’ and deputies’ committees voted to recommend adoption, with the bishops agreeing to place this on the consent calendar in the House of Bishops, which is the house of initial action for World Mission resolutions.

A017 calls on The Episcopal Church to acknowledge and grieve its participation in furthering colonialism through its worldwide mission efforts, calling them antithetical to the Gospel of Jesus, and urges that all mission efforts be marked by a mutuality of relationships. Martha Gardner, standing commission chair, said this resolution goes “hand in hand” with the resolution on guiding principles, noting that the standing commission is trying to promote “doing mission with, not for” others. Both committees recommended that this be adopted, but it was not placed on the consent calendar so the House of Bishops could discuss it.

Making world mission a part of theological education and formation curricula, whether in Episcopal seminaries or in diocesan schools of ministry, is the goal of A018. It also calls on seminaries and schools of ministry to create more online mission formation curricula in languages other than English for use outside the United States. An amendment to the resolution made clear that the creation of these curricula should include input from Anglicans around the world. The committees recommended the adoption and placed it on the House of Bishops’ consent calendar.

A022 commends the work of Episcopal Migration Ministries, whose mission is to welcome and help resettle refugees, and A028 celebrates the work of the Global Episcopal Mission Network and urges individuals and dioceses to support this organization, which is outside the structure of The Episcopal Church but supports its work in global mission. Both resolutions were approved for adoption, but because A028 includes $50,000 for GEMN’s support, bishops decided it would need floor discussion. A022 was placed on the consent calendar.

The 80th anniversary of the priestly ordination of the Rev. Florence Li Tim-Oi will take place in 2024, and D079 calls on the church to acknowledge and celebrate this historic occasion. The resolution notes that since 2006, Li Tim-Oi (who died in 1992) has been commemorated on The Episcopal Church’s Lectionary Calendar on Jan. 24, a commemoration that was made official in 2018. Both committees recommended adoption, and the resolution was placed on the House of Bishops’ consent calendar.