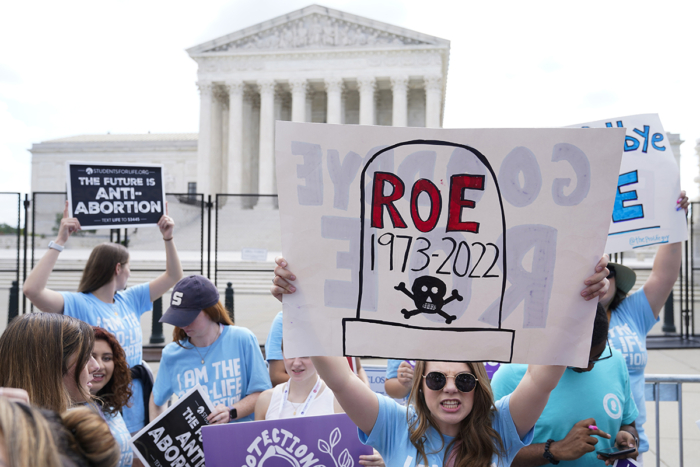 “The Constitution makes no reference to abortion, and no such right is implicitly protected by any constitutional provision,” Justice Samuel Alito wrote, in his 79-page majority opinion. In the past, the Supreme Court has held that the “due process” clause of the Fourteenth Amendment guarantees “some rights that are not mentioned in the Constitution,” Alito wrote, “but any such right must be ‘deeply rooted in this Nation’s history and tradition’ and ‘implicit in the concept of ordered liberty.’

“It is time to heed the Constitution and return the issue of abortion to the people’s elected representatives.”

“While I, like many, anticipated this decision, I am deeply grieved by it,” Curry said in his written statement. “We as a church have tried carefully to be responsive both to the moral value of women having the right to determine their healthcare choices as well as the moral value of all life. Today’s decision institutionalizes inequality because women with access to resources will be able to exercise their moral judgment in ways that women without the same resources will not.”

Today the Supreme Court released its decision in the case of Dobbs vs. Jackson Women’s Health Organization. The court has overturned the constitutional right to abortion that was recognized in the seminal 1973 case Roe v. Wade.

Jennings in her statement called the ruling “a blow to people of all faiths and none, who have cherished for nearly 50 years the hope of equal access to reproductive health care.” She cited past General Convention resolutions that opposed state and federal legislation restricting women’s reproductive rights.

“In keeping with these actions of General Convention, and in solidarity with those who are most vulnerable to this act of Christian extremism, we Episcopalians must now turn our attention to peacefully protesting state laws that seek to deny reproductive health care,” Jennings said, and “to protecting clergy and lay leaders who will be caring for and counseling pregnant people in an ever-more perilous environment.”

Jennings also cited a supporting opinion by Justice Clarence Thomas “that would have the Supreme Court reconsider landmark rulings that recognized the right to birth control, decriminalized same-sex intimacy and opened the way to marriage equality.”

In its 6-3 vote in the case of Dobbs v. Jackson Women’s Health Organization, the court upheld a law enacted in 2018 by the Republican-dominated Mississippi Legislature that banned abortions if “the probable gestational age of the unborn human” was determined to be more than 15 weeks.

Alito’s majority opinion specified that the ruling only pertained to abortion, but Thomas took the issue a step further in his concurring opinion: “In future cases, we should reconsider all of this Court’s substantive due process precedents, including Griswold [access to contraceptives], Lawrence [sexual relations], and Obergefell [marriage equality],” Thomas wrote. “We have a duty to ‘correct the error’ established in those precedents.”

In 1973, the Supreme Court voted 7-to-2 to establish a constitutional right to abortion, striking down state laws that banned the procedure.

In 1976, The Episcopal Church passed a resolution expressing its “unequivocal opposition to any legislation on the part of the national or state governments which would abridge or deny the right of individuals to reach informed decisions in this matter and to act upon them,” as pointed out by Jennings, in an early May statement that followed a leaked draft of Alito’s majority decision.

Curry called June 24 it “a pivotal day for our nation.”

“I acknowledge the pain, fear, and hurt that so many feel right now,” he said. “As a church, we stand with those who will feel the effects of this decision—and in the weeks, months, and years to come.”

When the 80th General Convention convenes July 8-11 in Baltimore, Maryland, among the resolutions under consideration will be D083, which “recognizes that access to abortion is a key element in preserving the health, independence, and autonomy of those who can bear children” and affirms that women’s access to reproductive care should extend to “abortion services and birth control with no restriction on movement, autonomy, type, or timing.”

The Episcopal Church upholds the conscience rights of pregnant women and other pregnant persons to determine whether they want to continue a pregnancy. Please write your members of Congress and ask them to protect reproductive rights. https://t.co/2NgCI26FJT#Episcopal pic.twitter.com/V4Bgb0Mhci

I believe abortion should be safe, accessible and rare. I believe it should be medically informed and legislatively dictated or judicially restricted.

The June 24 decision comes one day after the Supreme Court, also led by its conservative majority, struck down a 108-year-old New York gun law, siding with a more expansive approach to individual Second Amendment rights and limiting restrictions in public places.

The U.S. Constitution supersedes state law, however, “powers not delegated to the United States by the Constitution, nor prohibited by it to the states, are reserved to the states respectively, or to the people.” In 1973, the Supreme Court ruled that the “due process” clause of the 14th Amendment prohibited states from denying women access to abortion. Overturning Roe v. Wade effectively returns the matter of abortion’s legality to the states.

Until now, the procedure had been legal in all 50 states, but abortion rights groups have predicted that about half of all states will severely limit or outright ban abortion now that the Supreme Court has allowed them to do so, including in 13 states with so-called “trigger” bans set to take effect upon Roe’s repeal. One of those states, Kentucky, is scheduled in 2024 to host the Episcopal Church’s 81st General Convention in Louisville. And in Oklahoma, the state already passed a new law in May outlawing nearly all abortions from fertilization, a measure that is being challenged in state court but now appears unlikely to face a federal court challenge.

“In the Episcopal Diocese of Oklahoma, we have strong, faithful, Biblically informed views on both sides of this serious moral issue among our lay people and clergy,” Oklahoma Bishop Poulson Reed said in a statement reacting to the ruling in Dobbs. “I urge our Oklahoma Episcopalians, individually and in congregations, to exercise your conscience as you feel called to, and to be understanding and compassionate with one another at this divisive time, loving one another, and respecting the dignity of every human being, whatever our heartfelt disagreements.”

In Indiana, where the governorship and Legislature are controlled by Republicans who soon may outlaw abortion, Indianapolis Bishop Jennifer Baskerville-Burrows released a video message on the Supreme Court ruling.

“This is difficult, painful news for many of us, and as Christians, lay and ordained, we are often invited to walk with people when they are deciding to end a pregnancy,” Baskerville-Burrows said. “Sometimes those decisions are straightforward, and other times they are hard and complicated. But they are always deeply personal. … Our church is clear that our faith compels us to affirm and respect the dignity and worth of the women who will now struggle even more to access reproductive health care.”

By one estimate, the abortion clinic closures that result from overturning Roe would reduce the number of legal abortions in the United States by 14%, while abortion rights advocates warn that new restrictions will have the effect of driving up the number of life-threatening illegal abortions carried out through dangerous alternatives to professional care.

Public opinion on abortion has been narrowly divided for years, though a consistent majority of American have said they do not want to see the Supreme Court overturn Roe v. Wade, according to Gallup.

That resolution, however, concludes by questioning the effectiveness of legislative solutions, and it calls on state and federal governments to “take special care to see that individual conscience is respected, and that the responsibility of individuals to reach informed decisions in this matter is acknowledged and honored.”