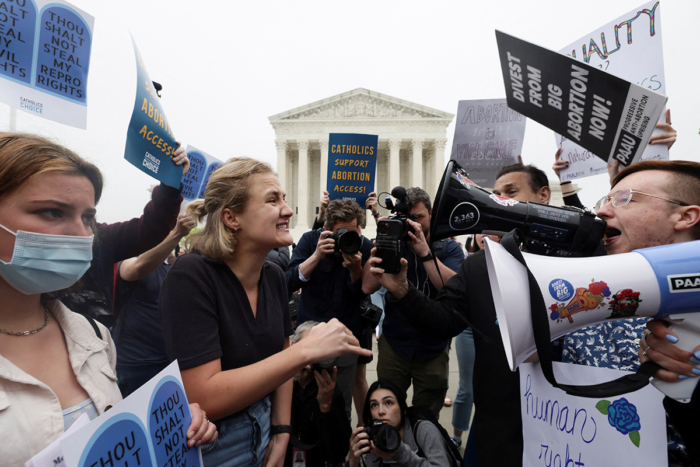 Pro-abortion and anti-abortion demonstrators protest outside the U.S. Supreme Court after the leak of a draft majority opinion written by Justice Samuel Alito preparing for a majority of the court to overturn the landmark Roe v. Wade decision on May 3. Photo: Reuters

Editor’s note: This story has been updated with additional background information about The Episcopal Church’s positions on abortion and reproductive care, as approved by General Convention.

[Episcopal News Service] One of The Episcopal Church’s presiding officers and its Office of Government Relations affirmed the church’s commitment to equal access to reproductive health care on May 3, after a leaked draft of a pending U.S. Supreme Court ruling indicated the court was poised to overturn the landmark 1973 decision in Roe v. Wade that ensured for women nationwide the right to obtain an abortion.

The Rev. Gay Clark Jennings, president of the House of Deputies, responded with a written statement that cited decades of General Convention resolutions in support of women’s access to birth control and abortion. In particular, Jennings said, The Episcopal Church’s governing body passed a 1976 resolution that expressed “unequivocal opposition to any legislation on the part of the national or state governments which would abridge or deny the right of individuals to reach informed decisions in this matter and to act upon them.”

“And yet, for half a century, the promise of equal access to reproductive health care has never been fully realized,” said Jennings, who is 71. “For nearly my entire adult life, Christian extremists have fought to restrict access to abortion with invasive laws, demeaning patient requirements and clinic regulations that go far beyond what is required for patient safety. … Now, these extremists are on the verge of making good on a half-century of threats.”

Jennings’ statement was in response to Politico’s May 2 report on a leaked document it obtained showing at least five Supreme Court justices willing to uphold a Mississippi law that outlaws abortions after 15 weeks of pregnancy. The draft decision, written by Justice Samuel Alito, would go further and overrule the court’s previous decisions in Roe v. Wade and the related Planned Parenthood v. Casey from 1992. “It is time to heed the Constitution and return the issue of abortion to the people’s elected representatives,” Alito says in the draft decision.

Chief Justice John Roberts on May 3 confirmed that the leaked draft was real but not final, and the court would investigate it as an unprecedented breach of protocol and a “betrayal of the confidences of the court.”

The U.S. Constitution supersedes state law, however, “powers not delegated to the United States by the Constitution, nor prohibited by it to the states, are reserved to the states respectively, or to the people.” In 1973, the Supreme Court ruled that the “due process” clause of the 14th Amendment prohibited states from denying women access to abortion. Overturning Roe v. Wade effectively would return the matter of abortion’s legality to the states.

The procedure is now legal in all 50 states, but abortion rights groups predict that about half of all states will severely limit or outright ban abortion if allowed to do so. By another estimate, the resulting abortion clinic closures would reduce the number of legal abortions in the United States by 14%, while abortion rights advocates warn that new restrictions will have the effect of driving up the number of life-threatening illegal abortions carried out through dangerous alternatives to professional care.

Public opinion on abortion has been narrowly divided for years, though a consistent majority of American have said they do not want to see the Supreme Court overturn Roe v. Wade, according to Gallup.

That resolution, however, concludes by questioning the effectiveness of legislative solutions, and it calls on state and federal governments to “take special care to see that individual conscience is respected, and that the responsibility of individuals to reach informed decisions in this matter is acknowledged and honored.”

The church’s Washington-based Office of Government Relations released a brief statement on May 3 in response to the pending decision in the case known as Dobbs v. Jackson Women’s Health. “The Episcopal Church reaffirms our commitment to ‘equitable access to women’s health care, including women’s reproductive health care,’ which we view as ‘an integral part of a woman’s struggle to assert her dignity and worth as a human being,'” the office said, citing a resolution passed by the 79th General Convention in 2018.

“The Office of Government Relations will continue to advocate at the federal level to protect reproductive rights,” it said, and it shared its previously assembled overview of church positions on abortion and women’s reproductive health.

Jennings also underscored the language of the 2018 resolution in her statement on May 3.

“As Episcopalians, we have a particular obligation to stand against Christians who seek to destroy our multicultural democracy and recast the United States as an idol to the cruel and distorted Christianity they advocate,” Jennings said. “Now – before this outrageous opinion becomes law – we must make our Christian witness to the dignity of every human being by insisting that we support the right to safe and legal reproductive health care because our faith in a compassionate God requires us to do so.”