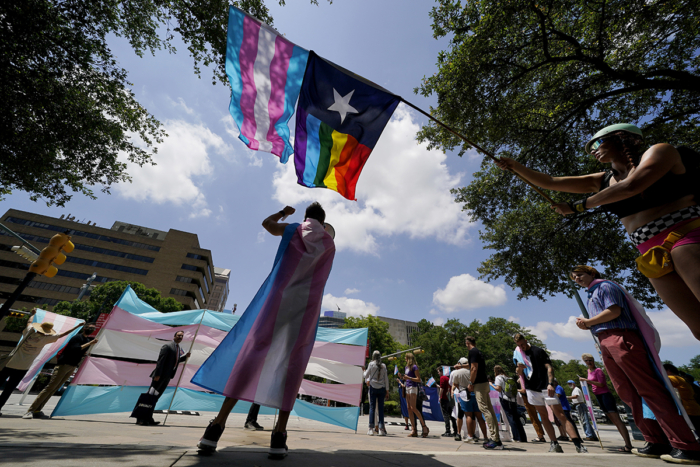 Demonstrators gather on the steps to the Texas State Capitol in Austin in May 2021 to speak against transgender-related legislation bills being considered. Photo: Associated Press

[Episcopal News Service] The bishops’ and deputies’ committees on Social Justice & U.S. Policy wrapped up their work ahead of the 80th General Convention with a marathon online session June 22 in which the committees advanced 16 resolutions on topics ranging from women’s reproductive rights to the threats to electoral democracy embodied by the rioters who stormed the U.S. Capitol on Jan. 6, 2021.

In an evening meeting that stretched nearly to three hours, the bishops and deputies also held a final hearing, on Resolution D066. That measure would call on The Episcopal Church “to advocate for access to gender-affirming care in all forms … and at all ages.” The resolution was proposed in response to Republican elected officials’ push to pass anti-transgender legislation nationwide, including measures that would deny transgender minors medical treatments to align their bodies with their gender identities.

Six people testified in favor of the resolution, including transgender clergy, parents of transgender children and members of the group TransEpiscopal.

The Very Rev. Amy McCreath, dean of the Cathedral Church of St. Paul in Boston, Massachusetts, described the experiences of her transgender son as he struggled with his gender identity during middle school. Until then, “I had no idea of the power of the forces threatening the emotional and physical health of trans youth,” McCreath said.

Bishops’ and deputies’ committees have distinct rosters and vote separately, but they often meet together for hearings and deliberations on resolutions. Other resolutions recommended in votes by the committees on Social Justice & U.S. Policy included D002, promoting equity in health outcomes; C054, supporting reforms that would expand voter registration and ballot access; C027, affirming the church’s support for nuclear disarmament; and D013, backing efforts to declare “Lift Every Voice and Sing” as the national hymn of the United States.

The committees advanced a resolution offering support for child welfare and foster care systems, D046, and another promoting public investment in post-high school education, D048. Resolution B007 also was forwarded for approval. It advocates for federal investment in “evidence-based community violence intervention programs.”

The Jan. 6 attack on the U.S. Capitol, which is now is the focus of committee hearings in the House of Representatives, is referenced in Resolution D042. It calls for reform of the Electoral Count Act of 1887 after the Capitol rioters and other supporters of former President Donald Trump unsuccessfully tried “taking advantage of ambiguities” in the law to overturn Trump’s 2020 loss. Another resolution advanced by the Social Justice & U.S. Policy committees, Resolution D063, seeks to combat “false statements that inflame division and stoke hatred and violence.”

Under Resolution D031, The Episcopal Church would take a more forceful stance behind “fundamental change to the way we process migrants, moving away from detention and other mechanisms that can support unjust immigration policies.” The bishops and deputies advanced the resolution, to prioritize policies that will reduce and eventually end detention and surveillance of migrants.

Two resolutions before the committees address Indigenous issues. D082 highlights the often-overlooked problem of missing and murdered Indigenous women, while D070 would promote advocacy of legislation addressing inequities in health care, housing, nutrition and education in Indigenous communities. The committees recommended both resolutions without objections.

“These centers often misrepresent themselves as medical centers, providing factually incorrect information to pregnant people about pregnancy, abortion, contraception, and fertility,” Murray, a lay deputy from the Diocese of Oregon, said in the explanatory text that he submitted with the resolution.

The resolution, which was recommended by the committees, also includes an apology for the church’s past support for such centers, specifically referring a measure passed in 1994 by General Convention.

Few of the resolutions discussed at the committees’ June 22 meeting generated much disagreement, with the exception of D054, which pertains to the choice of Louisville, Kentucky, as the site of the 81st General Convention in 2024.

The resolution would call on General Convention to consider relocating the 2024 meeting to a different city because of Kentucky’s restrictions on women’s reproductive rights. Those rights are expected to further erode in Kentucky and dozens of other states after the U.S. Supreme Court issues a ruling in a case that could overturn abortions protections ensured since 1973 by Roe v. Wade. Kentucky is one of 13 states that have “trigger” laws set to make abortion illegal if Roe v. Wade is overturned.

Louisiana Bishop Morris Thompson called Resolution D054 “horrible” for setting a precedent of requiring ideological alignment for a city or state to host General Convention. “I just don’t think we ought to be doing this,” he said, adding that Episcopalians in the Diocese of Kentucky “have been working hard to prepare” to host the next triennial churchwide gathering in two years.

The Ven. Carole Maddux, a deputy from the Diocese of Atlanta, expressed unease at “some sort of litmus test” for host cities. She also suggested that there may be unique opportunities to promote the church’s stance on issues like reproductive rights in places where those rights are at risk.

Murray, the Oregon deputy, countered that the resolution doesn’t order a new location but merely asks General Convention leaders to reconsider the city. He also warned that a particularly restrictive abortion law in a host state could pose real health threats to female bishops and deputies facing certain medical emergencies, such as miscarriages.

Daniel Valdez, a deputy from the Diocese of Los Angeles, said the resolution also could inform how the church considers locations for future meetings of General Convention. “This is a long battle that we’ll have to take firm stand on,” he said.

A majority of deputies in the meeting voted to recommend the resolution, while the bishops’ committee voted to reject it. Since the House of Deputies is scheduled to take up the resolution first in Baltimore, it could get voted up or down on the house floor, but if approved by the deputies, it would progress to the House of Bishops with a recommendation that it be defeated.