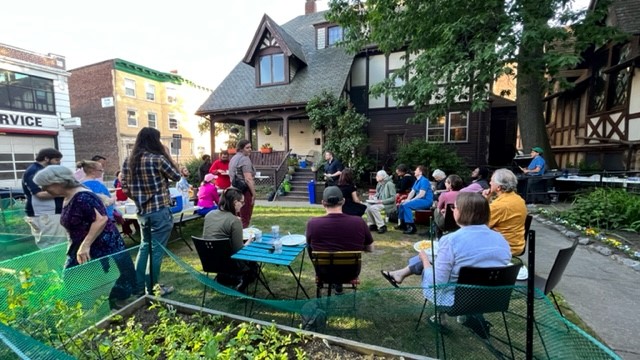 [Diocese of Massachusetts] CRECHE – the Charles River Episcopal Co-Housing Endeavor – is adding a fourth house to its stable of Boston-area intentional communities, to be launched next year as Jubilee House in a new partnership with New Roots AME Church in Boston’s Dorchester neighborhood.

The Rev. Isaac Everett, CRECHE’s executive director, announced plans for the new house at the organization’s annual Pentecost gathering for friends and supporters on June 5 in the yard of CRECHE’s Emmanuel House in Allston, Boston.

After renovations, Everett said, Jubilee House – just a stone’s throw from CRECHE’s St. Mary’s House – will be “an eight-bedroom intentional community in Upham’s Corner, a place of prayer, hospitality and justice with a community garden and food forest in the vacant lot next door, renovated to be as green as we can possible make it.”

It will be the second property that CRECHE owns outright, its second partnership with a Black-led congregation and its first outside The Episcopal Church. 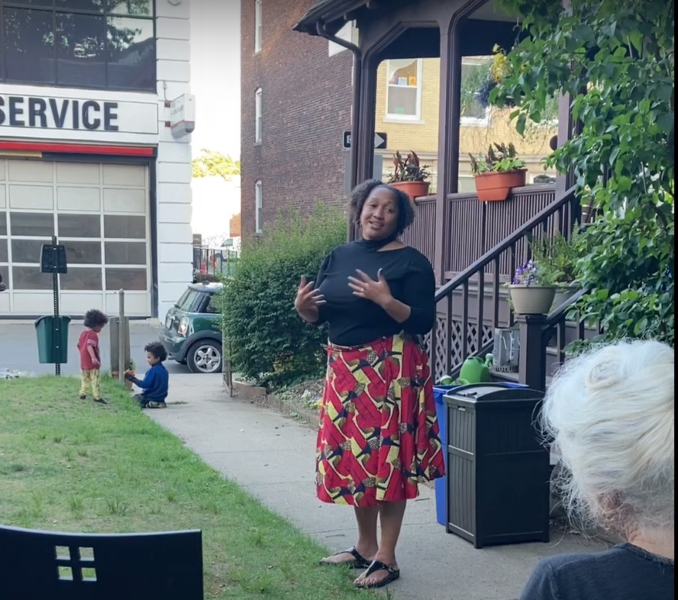 “I’ve lived in the neighborhood for more than 20 years and I’ve seen how many people are being pushed out of the neighborhood,” the Rev. Mariama White-Hammond, the founding pastor of New Roots, told the gathering.

“We’re just really excited about the possibility of creating something affordable in a neighborhood where so many people are being displaced, but also to be together in the kind of community we think is needed at this moment more now than ever,” she said.

The name and idea for Jubilee House came out of a brainstorming session at a church retreat in 2020, she said, but the congregation soon discovered that affordable properties suitable for communal living are in short supply.

By the time New Roots made contact with Everett at CRECHE, the latter had just come out of a strategic planning retreat of its own with a new goal to increase its engagement with marginalized neighborhoods. New Roots was at the top of its dream list of potential new partners.

Around the same time, Joanne Tuller, a friend of CRECHE through the Boston Co-op Network, contacted Everett about a house next door going on the market. She didn’t want to see the house get sold to developers who would flip it into expensive condos.

“In fact, she felt so strongly about it that she offered to buy the house herself, just to get it off the market, and then resell it to us when we’d worked everything out with New Roots” – and at a discount, Everett told the Allston gathering.

“If you are faithful, you don’t always know what God’s timing is going to be, but it’s beautiful to see when the Spirit moves,” White-Hammond said of the way things are coming together to make Jubilee House a reality.

The relevance of CRECHE’s mission has been sharpened in the current housing market, Everett said in a recent interview, with its high demand and scarce supply; zoning laws that prevent new affordable housing; and the soaring prices that financially incentivize homeowners to perpetuate the current housing crisis in Greater Boston and beyond.

CRECHE’s stated mission is to provide a faith-rooted, community-focused alternative to the for-profit housing market by securing co-housing for people who feel called to live together like families, sharing meals, household care and rhythms of spiritual practice – at below-market rates.

CRECHE’s model includes community support for its member households. “That’s a huge part of what CRECHE does, helping people learn to live together as Christian community well,” Everett said.  “So there’s a real intersection of housing justice, eco-justice – because it’s more sustainable and less ‘consumptionist’ – and it’s about the formation of new monastic community. We’re sort of sitting right in the middle of all three of those.”

Intentional community is itself a vocation, Everett said, sharing his own personal experience of that calling.

“It’s been absolutely transformational in my life,” he said. “I identify as my primary three vocations that I am a husband, I’m a priest and I’m an intentional community member, and with all three of those, the more seriously I take them and the more deeply I live into them, the more I like who I become.” 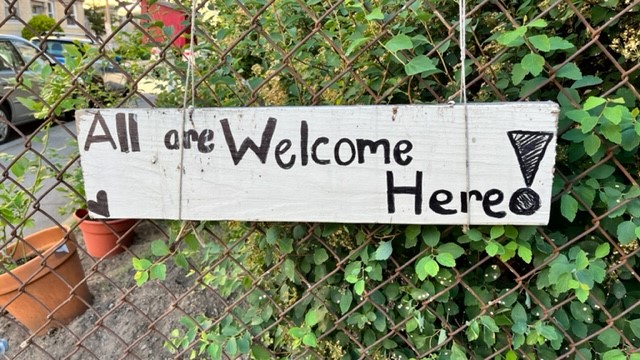 A sign welcomes neighbors to the yard of Emmanuel House. Photo: CRECHE

While many single-house intentional communities went under during the pandemic, Everett noted, CRECHE, as a community of networked houses, has come through mostly intact.

It has a long-term rental agreement for Emmanuel House in the former rectory of the diocese-owned St. Luke’s-St. Margaret’s property that is under redevelopment in Allston, and with Trinity Parish in Newton Centre for Trinity House, CRECHE’s household for graduate students. CRECHE bought and launched St. Mary’s House in Dorchester in 2020 with significant investment from staff and board members who dipped into their retirement funds to make the purchase.

The unexpected closure of its rented Crossing House in North Cambridge this year – necessitated by the owner’s sudden need to sell – underscored the value to CRECHE of pursuing property ownership.

“An important part of what we’re doing is creating stable environments for people to thrive in,” Everett said.

CRECHE has been an independent nonprofit since 2018, but got its start in 2016 with Diocese of Massachusetts mission hub seed money. It was the last and smallest hub to receive funding from the diocese’s now-completed Together Now capital campaign initiative aimed at bringing congregations into collaboration around innovative ministry projects that none could accomplish alone.

“I want people in the diocese to be proud of us,” Everett said. “CRECHE was initially the Boston-Cambridge Mission Hub, and we have grown beyond that seed funding but we would not have existed without that seed funding. My hope is that that investment they made in us will be paying dividends for decades.” The Diocese of Massachusetts, he said, “has without a doubt been our best and most faithful ally in getting this ministry launched.”

He said the ministry recently received additional validation in the form of a $40,000 Harvest Grant – CRECHE’s third round of financial support from The Episcopal Church’s Task Force on Church Planting and Congregational Redevelopment, which funded, over the past triennium, new worshiping communities and missional enterprise ventures across the church at various stages in their development.

“Honestly, it’s super cool, because The Episcopal Church’s Office of Church Planting looks at what we’re doing and recognizes it as growing the church, which is amazing and feels like such a validation,” Everett said.

As the new Jubilee House and New Roots partners join the CRECHE fold, Everett said, he anticipates a culture shift. “You can’t bring new people into a community without the community changing, and I’m really excited for it,” he said.