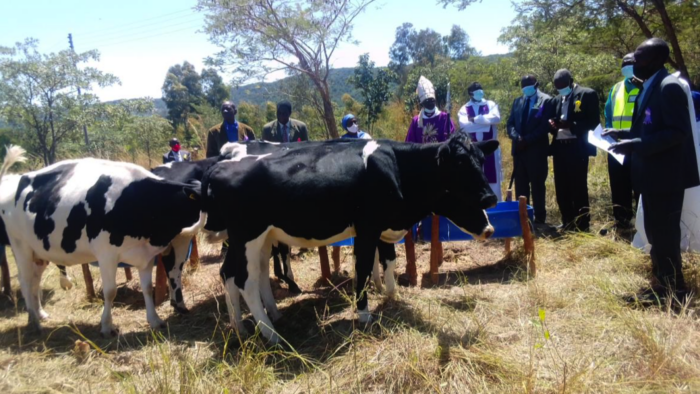 [Episcopal News Service] Wisconsin is known as the Dairy State, so it may come as no surprise that the Diocese of Fond du Lac rallied behind a plan to furnish cows for a farm in Zimbabwe operated by its companion diocese.

Fond du Lac’s fundraiser this year generated more than $24,000 from 60 donors representing 25 of the diocese’s congregations, and that money was used by the Anglican Diocese of Masvingo to help launch its dairy project with six cows, which are expected to generate revenue for the diocese and support the community around the farm.

“The Anglican Diocese of Masvingo is very grateful to Bishop Matthew Gunter and the faithful in the Episcopal Diocese of Fond du Lac for supporting us in this great way and enabling the diocese to start sustainable income generation initiatives,” Matthias Thompson Maduba, the Diocese of Masvingo’s development officer, said in a Fond du Lac news release.

Fond du Lac and the Anglican Diocese of Masvingo formed a companion diocese relationship in 2016. Since then, they have incorporated prayers for each diocese’s congregations into their Sunday liturgies while also sharing diocesan news with each other from across the globe. In 2019, Masvingo Bishop Godfrey Tawonezvi led a small delegation on a visit to the Diocese of Fond du Lac, one of three Episcopal dioceses in Wisconsin.

Fond du Lac raised more than $60,000 from 2018 to 2021 to support Masvingo, first with its Transfiguration Youth Skills Center and more recently in the form of general financial relief as the Zimbabwean diocese dealt with pandemic-fueled budget shortfalls. Some Wisconsin congregations conducted additional fundraisers, such as St. Luke’s Episcopal Church in Sister Bay, which raised money for a new well at Masvingo’s Christ the King Daramombe school. The school is located at the center of the Anglican diocese’s 1,200-acre Daramombe Mission Farm, which provides produce for the school.

The COVID-19 pandemic forced Fond du Lac leaders to shelve plans for a visit to their companion diocese in Zimbabwe. Instead, with Tawonezvi scheduled to retire as Masvingo bishop at the end of March 2022, they asked if there was a project Fond du Lac could support in honor of Tawonezvi’s 20 years of service to his diocese. The Zimbabwe diocese responded that it had long hoped to add a dairy operation to the Daramombe Mission Farm.

That prompted the Diocese of Fond du Lac to launch its Epiphany Campaign on Jan. 6 to raise money for the cows.  The fundraiser was as a surprising success, said Matthew Payne, the diocese’s canon for administration. “We just put the word out and had that fantastic response,” Payne told Episcopal News Service.

“Many in the Diocese of Fond du Lac have come to cherish our relationship with our siblings in the Diocese of Masvingo,” Gunter said in an email to ENS. “That was reflected in the broad and generous response to this appeal. We are not a very large diocese in numbers, but we are large of spirit.”

Congregations and dioceses interested in pursuing their own global companion relationships are encouraged to review the guidelines produced by The Episcopal Church’s Global Partnerships Office. The office can be reached by email at globalpartnerships@episcopalchurch.org.