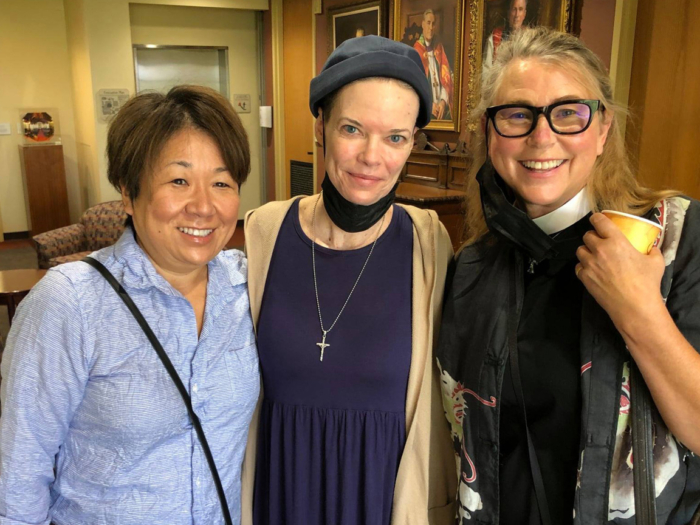 [Diocese of Los Angeles] Ann Noble never dreamed her love for acting would lead her to Los Angeles County jails.

Born and raised in Chicago, she moved to Los Angeles in 2003 to expand an already acclaimed career as actor, playwright, director, and theater company founder. Performing in a production of “Murder in the Cathedral” brought her to All Saints Church in Pasadena.

“I don’t know what it was, but I felt at home,” said Noble, who serves as program coordinator for Prism, the diocesan restorative justice ministry. “I was never very religious. I had no desire to do what I am doing now; it wasn’t even on my radar. I can’t describe it. It is such a beautiful place, and I loved the call to social justice – and I don’t know where that started.”

She joined, attended new member classes and, while on retreat at the Church of Our Saviour in San Gabriel before her confirmation, “I met Sister Greta [Ronningen] and Brother Dennis [Gibbs],” who were then serving as co-directors of Prism and the Community of Divine Love monastery.

Attending mass at the Community of Divine Love inspired Noble to become an oblate, or associate, of the monastery, and to join their ministry of presence to the incarcerated. Once inside the Men’s Central Jail and adjacent Twin Towers, and the Century Regional Detention Facility, which houses women in Lynwood, “again I had that feeling of being home,” she said.

“It is such a stark environment. You go in, and you’re locked in there. You think, from the outside, that it’s going to be scary or dangerous. But it just feels connected to the Holy Spirit. I just feel I am among my brothers and sisters, my siblings.”

Now, as program coordinator, she continues to visit and to lead Sunday worship with the incarcerated, while overseeing Prism’s day-to-day operations, maintaining the website presence, organizing volunteers, and making sure the bread that is consecrated at All Saints’ gets to the jails.

“It’s a profound moment of humility, being one on one with those in jail,” she said. “It’s singular. All the other things we worry about, day to day, seem to disappear, that sense of the person that is in front of me is the most important person in the world. And it’s also that wonderful moment of ‘your presence is enough.’

“We don’t get that much in the real world. We always feel like we have to earn our place and, in the jails, there’s no earning anything. It’s just grace. If more people had that experience, they wouldn’t feel so lost and alone. I think on the outside, too, we feel lost and alone.”

Noble “brings her whole self into the jail,” says Sharon Crandall, who as Prism director coordinates the ministry with jail officials. “She gives so much of her heart through her words, expressions and body language – it’s like an embodied ministry! She has a unique style of chaplaincy. I love working with Ann – she is passionate about our ministry in the jail and fun and easy to work with. I am so very grateful for her presence.”

Yet not much is easy about life in the jails, or for the families of those incarcerated, a theme Noble amplifies in “90262: Lynwood, Blue Like You,” a short play she wrote about a daughter’s visit to see her estranged incarcerated mother.

The play, released in Dec. 2021 on podcast, is part of the Antaeus Theater Companies “Zip Code Plays,” designed to explore the vibrant and diverse communities that make up Los Angeles.

“It [the play] was inspired by Ann’s work at the detention center, but it was fictional. It was very sweet, and quite intense,” recalled Kwana Martinez, who starred as Mercy, the estranged mother, incarcerated for life. “The mother and daughter are trying to reconnect after quite some time of not connecting and only talking through the grandmother. I was playing a young mother, who had had a child at a young age and that was part of what affected their relationship.”

The play is not their only collaboration, said Martinez, who along with Noble, has taught empowerment classes for pre-teen and teenaged girls at the YWCA in Glendale.

The effort is part of the Antaeus Theater’s community outreach, and “the girls had all expressed an interest in acting and writing and a general interest in theater. It was a beautiful thing,” Martinez recalled about a 2021 class. “We were deep in quarantine, so we had to figure out how to work with them on Zoom. We used objects and poems to encourage them. Some were too shy to read their own writing.”

At the conclusion of the class, “we had a little bit of a performance, where parents were invited and a few people from the YWCA. It was brief, but the girls were so excited to share what they wrote about. I credit Ann’s calm and centered energy for encouraging that.”

Kelsey Siepser has joined Noble and Martinez to teach in the YWCA empowerment program. “Those young girls were incredible,” she remembered. “We got to hold space for these amazing young women, to share their ideas and dreams and hopes and fears. It was really beautiful. I learned a lot, just watching Ann teach and the way she facilitated learning.”

Noble also directed Siepser’s solo show, “Antennae,” in 2020. She recalled that when she was a student of Noble’s in a solo performance class, “Ann … created a strong community that helped me get through a really hard time.”

Christopher Loverro played a gangster in the 2016 movie Astrid Clover; a paramedic in the 2018 movie Silicon Valley, a bounty hunter named Prophet in the 2021 movie Bounty, but a role he is particularly fond of is helping returning veterans heal from PTSD using theater.

An Iraq war veteran, Loverro suffers from PTSD, and said he battled suicide upon returning home. Because the traditional treatments – therapy and antidepressants – aren’t always effective for veterans, he turned to the arts, and that is where he met Noble.

Collaborating with her “has been an absolute gift,” he said. “Ann is one of the best talents around, as far as teaching, directing, and acting … and she’s been instrumental in the healing of many of the vets in our community here in L.A.”

He added: “It’s kind of like what she does with the incarcerated youth. Her superpower is the ability to create that safe space and build trust and a sense of tribe so people feel they can open up in an environment where they’re not going to be judged. When you build someone’s trust, and they realize you actually care, you can do so much.”

Adrian LaTourelle, who operates the Berg Studios in Atwater Village, recalled team-teaching with Noble a Shakespeare workshop for incarcerated youth in Chatsworth, also as part of the Antaeus Theater outreach.

“A lot of the teenagers have had pretty traumatic lives, and simply had never been asked what their stories were, had never been given a chance to use their voices,” he said. “We pulled their writings together and fashioned them into a play … which would be performed. You could see the impact on their faces,” said LaTourelle, who had just read for yet another of Noble’s plays.

“It’s very powerful, very funny, heartbreaking,” he said of the play, called “The Trial.” “It is about a Mennonite woman and a transgender person who are at the hospital, because the Mennonite woman’s husband and the trans person’s sister are in a cancer trial.”

Noble also teaches scene study and solo performance, via Zoom, to students in Canada, Australia, and the United State through the Berg School.

Initially, Noble, who is legally blind, said she had wondered if she were experiencing a call to the diaconate or priesthood. She entered the discernment process at All Saints to explore it.

Then she went into the jails. “It was very funny,” she recalled. “I went to my discernment meeting and said, ‘Aren’t the jails amazing? Don’t you just want to be there all the time?’ And they said no, that’s a call. They helped me discern that this was my place, where God was calling me to, and that I don’t have to be ordained. And I can still do my bit, as they say.”

The Rev. Canon Susan Russell recalled being part of that discernment process at All Saints’: “I still remember with deep joy her delight in the discovery of her call to the ministry of chaplaincy – and the thrill of realizing that she’d ‘already been ordained as a lay person’ to live into it! If ever there was a moment when Frederick Buechner’s definition of vocation as the place where ‘your deep gladness and the world’s deep hunger meet,’ it was that moment for Ann. So grateful for her and for her ministry.”

Diocesan Canon to the Ordinary Melissa McCarthy agreed. “Ann brings all of who she is to her chaplaincy, offering a unique mix of an inviting, quiet demeanor and big energy and enthusiasm to the work she is called to do. Her deep well of faith combined with her many gifts are such a blessing to the important work she does to bring light and life to some of the most marginalized in her work for Prism.”

Noble said her visual disability has meant “my listening skills are pretty great, I have an almost auditory photographic memory. That’s why the spoken word is so important to me. What I hear is everything to me because I can’t rely on my vision.”

While performing, writing, directing, and coaching and instructing an international list of actor-hopefuls, she also finds time to teach writing at Homeboy Industries and drama at L.A.’s LGBT Center with at-risk and homeless youth.

Currently, she is busily writing and will direct the Palm Sunday Gospel Drama at All Saints, as she has for the past six years, and is starring on Tuesdays at 8 p.m. through April 5 in “Little Parts Hunts a Baby-Daddy,” a play she conceived, wrote and is performing as part of the Echo Theater’s series “Alone Together.”

She has also written and directed for the Museum of Tolerance’s Witness Theater, with upcoming performances created and performed by Los Angeles youth and Holocaust survivors. The performances will be at 7:30 p.m. on Thursday, April 28, and at 7 p.m. on Sunday, May 1, at the museum, located at 9786 West Pico Boulevard in Los Angeles.