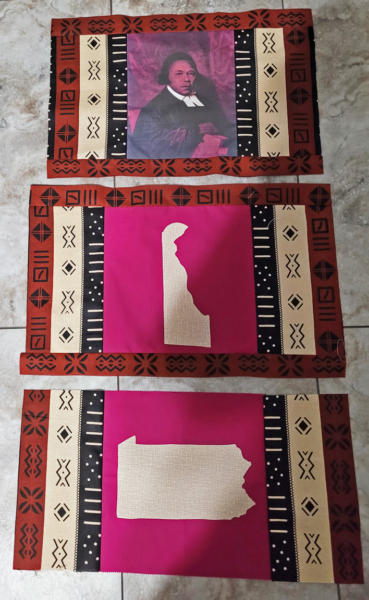 [Diocese of Los Angeles] As the Rev. Jamesetta Hammons quilts the image of Absalom Jones, The Episcopal Church’s first Black priest, she wrestles with the way his ministry has shaped her own, more than two centuries after his death.

“As a deacon, I’m called to be with everybody, no matter their station in life, or their race, or color,” recalled Hammons, who has served at St. Barnabas, Pasadena, and as a chaplain at the King Drew Medical Center in Los Angeles. “It reminds me of the work that he [Jones] did as he went about his healing ministry during a pandemic, with so many sick and in need of healing.”

Hammons began the four-panel quilt in response to the invitation to engage the annual diocesan commemoration of Jones’ legacy in a different way. Jones’ feast day is celebrated Feb. 13, typically with a diocesan worship service, but this year the H. Belfield Hannibal Chapter of the Union of Black Episcopalians invited the entire diocesan community to express that legacy creatively, according to Colleen Thomas, chapter chaplain. 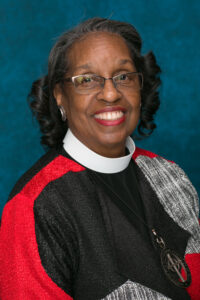 Submissions are invited through March 13, and may be uploaded here. Works will be published widely via various online networks, according to Colleen Thomas, chapter chaplain.

“I thought giving people a way to engage with Absalom Jones might be a different way of inviting people to worship,” Thomas said. “It could be poetry, a photo collage, perhaps a more abstract way of thinking about who Absalom Jones is to you, how you embody his life and ministry.”

Thomas, a professional writer and a parishioner at All Saints, Beverly Hills, said submissions received so far have include photos and personal reflections of Jones’ values of freedom and perseverance.

Jones, born a slave in Delaware in 1746, taught himself to read and write and eventually purchased his freedom and that of his wife, Mary Jones. He became a popular evangelist and preacher and, along with Richard Allen, founded the Free African Society, a benevolent organization that aided former slaves.

During Philadelphia’s yellow fever epidemic of 1793, both men “made the decision to stay in the city and nurse and care for and bury the mostly white sick and dying who were not able to escape the city,” according to Byron Rushing, vice president of the House of Deputies, in a post on the House of Deputies website.

Although Jones was ordained a priest in 1802, it took nearly 70 years for the Diocese of Pennsylvania to fully recognize St. Thomas Church in the business affairs of diocesan convention, with voice and vote.

According to a short biography of Jones by Arthur K. Sudler, archivist of St. Thomas’ Church: “Jones was an earnest preacher. He denounced slavery and warned the oppressors to ‘clean their hands of slaves.’ … But it was his constant visiting and mild manner that made him beloved by his congregation and by the community. St. Thomas Church grew to over 500 members during its first year. The congregants formed a day school and were active in moral uplift, self-empowerment, and anti-slavery activities.”

Many Black Episcopalians continue to be inspired by Jones’ witness.

“He evokes me to freedom, to perseverance,” Thomas said. “I’ve been thinking about Absalom Jones since our revival in July last year, when Byron Rushing charged us with the question, ‘Was Absalom Jones right or was Richard Allen right?’ Do we really want to carry this mantle of being missionaries to white people in The Episcopal Church?

“Because, by choosing to be Episcopalians, in a sense he’s suggesting that that’s what we’ve taken on, and I’ve been sitting with that for months,” she said. “Absalom Jones stayed. So, how does his decision impact my life, the way I do ministry and my relationship to the church?”

Similarly, UBE member Elizabeth Butler, who submitted a reflection for consideration, noted that because of Jones’ powerful sense of self and deep faith, which shaped his reality and grounded his ministry despite adversity, “we have also relied on our faith to help us live productive, meaningful lives.

“When Rev. Jones founded his church, he wanted dignity, a place to worship and control over his own person,” she added. “His legacy endures and continues to be an example for us today.”

Jones’ ministry reminded Jenna Kyle of her grandfather, the Rev. Clifford F. Kyle, who in the 1940s founded Chicago’s Interracial Fellowship Church, and helped her better understand her grandfather’s life, even though they never met, she wrote.

“Perhaps the similarity between both men that is my favorite is what I understand to be a supernatural connection with the Bible,” she wrote. “It is reported that Absalom Jones taught himself to read using the New Testament. It has been said that my grandfather possessed a photographic memory and could read pages of the Bible to you based on recall alone.”

UBE chapter President Stacey Forte Dupree said the goal of the commemoration was to examine Jones’ life and legacy in light of current contexts, to consider “what impact it had on our lives and the church today.

The invitation to submit creative expressions meant, “how can we offer a different type of liturgy that actually involves the people. That’s what liturgy is, the work of the people, so let’s be creative with it.”

Hammons, who submitted photos of the quilt bearing Jones’ image, said it is intended as a wall hanging and “is my way of telling the story of Jones, of his being taken away from his family, ending up in Pennsylvania and the evangelism work that he did with Richard Allen, and bringing people to God.”

The four-part purple quilt is framed with fabric resembling African mud cloth, she said. One panel represents Jones’ birthplace, the state of Delaware. Another, Pennsylvania, represents the place he began his ministry, she said.

“I still have some more things to put on it, maybe the image of a slave cabin and some chains,” she added.

Although Jones wasn’t allowed voice or vote in diocesan gatherings, he remained an outspoken abolitionist, Hammons observed. “It reminds me of the unspoken hushing of people who are different from the status quo.”

Jones, who died Feb. 13, 1818, was also “a risk-taker. He could have gone with Allen, but he didn’t,” Hammons said. “He stayed. He spoke out. He helped the next person in front of him. He brought me to a deeper understanding of my ministry as I look back at his. Absalom Jones was tending to not only his own flock but to others as well.”