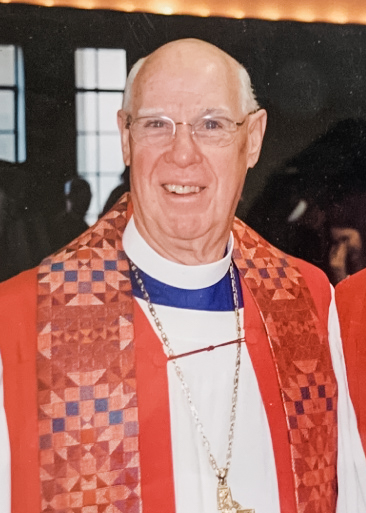 [Episcopal Diocese of West Texas] The Rt. Rev. John Herbert MacNaughton, seventh bishop of the Diocese of West Texas, died peacefully in a San Antonio hospital on Feb. 28 with his family gathered around him. He was 92 and had been hospitalized following a stroke less than two weeks before. As he received treatment following the stroke, a brain tumor was discovered, and the decision to enter hospice care was made on Feb. 25.

MacNaughton married his wife, Shirley, in 1954, and they have five children and numerous grandchildren.

He was consecrated bishop of West Texas on Feb. 6, 1986, and served in that ministry until his retirement in 1995. Prior to becoming bishop, he served as rector of Christ Church, San Antonio, from 1975-1986. He also served churches in his native Minnesota from 1954-1975. Following retirement, MacNaughton served twice as interim rector of St. Luke’s, San Antonio, and supported his three successors by making episcopal visitations to numerous congregations until prevented by the pandemic.

In addition to serving the Diocese of West Texas for decades, MacNaughton was known nationally as a powerful voice for stewardship, biblical literacy, and evangelism.

A memorial Eucharist will be held at St. Luke’s Episcopal Church in San Antonio on March 5, at 1 p.m. Central. Clergy are invited to vest with white stoles and process. The service will be made available via livestream by Porter Loring Mortuaries.

A full obituary and the memorial service livestream link are available online at porterloring.com/obituaries.