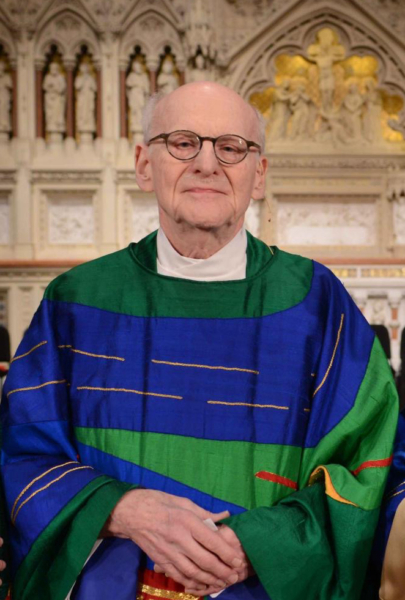 Norgren was born in Maryland on May 15, 1927, and studied at the College of William and Mary and the General Theological Seminary before ordination to the diaconate and priesthood in 1953 in the Diocese of New York. He was a fellow and tutor at GTS before continuing his studies at Oxford, where he served as curate and priest-in-charge at St. Barnabas, Jericho Road.

From 1959 to 1971, Norgren served as executive director of the National Council of Churches Commission on Faith and Order, steering the major American ecumenical organization through the civil rights movement and the Vietnam War. During this time, he was also an invited Episcopal Church observer at the Second Vatican Council and he began working on national Episcopal ecumenical commissions.

Norgren’s next role was as assistant ecumenical officer and then ecumenical officer of The Episcopal Church, positions in which he served from 1975 to 1995 on the staff of Presiding Bishops John Maury Allin and Edmond Browning. In this capacity, he oversaw significant developments in Episcopal Church relationships and cooperation with American Lutherans, Polish National Catholics, Roman Catholics and Orthodox Christians. He also coordinated The Episcopal Church’s involvement in the National Council of Churches, the World Council of Churches and in Anglican Communion ecumenical conversations. He served briefly as Episcopal Church world mission partnership officer for Europe, and visited the USSR with church delegations to support the life of Christians under communism.

Following his retirement, with his friend and colleague the Rev. J. Robert Wright, Norgren shepherded the conversations that culminated in a full-communion agreement with the Evangelical Lutheran Church in America. He continued as a theological consultant to the Office of Ecumenical and Interreligious Relations until 2000.

Norgren was an active priest of the Diocese of New York serving at Trinity, Wall Street, as priest-in-charge at the Church of the Ascension, and as associate priest at St. Thomas Church, Fifth Avenue, until the time of his death. He was a member of the Fellowship of St. Alban and St. Sergius, which promotes friendly relations between Eastern Orthodox and Western Christians, and an avid concertgoer throughout his life.