[Episcopal News Service] Congregations across The Episcopal Church have long supported efforts to help people who are homeless, whether they are looking for a place to stay, a nourishing meal or friendly conversation. The urgency of such ministries increases during the winter months, when lack of shelter can become a life-threatening hazard.

As cold-weather communities arrange for overnight shelters and day centers for people to stay warm, some Episcopal congregations are contributing space in their own churches and parish halls to welcome guests experiencing homelessness.

In Springfield, Virginia, St. Christopher’s Episcopal Church converted its parish hall into a makeshift shelter for a week, from Jan. 2-9, to house about 25 people who had nowhere else to go. The church is one of several Fairfax County faith communities that are taking turns welcoming such guests in their buildings as part of the county’s Hypothermia Prevention Program. The program runs from Dec. 1 to March 31 and serves more than 1,000 individuals each year.

In addition to a cold snap during the week that St. Christopher’s welcomed overnight guests into its parish hall, the region was hit one day with significant snow, the Rev. Carey Connors, the priest-in-charge, said in an interview with Episcopal News Service. Also, another shelter in the county lost power and temporarily sent some individuals to stay at St. Christopher’s.

“We had less interaction this year with our guests,” Connors said, citing the need to maintain physical distance because of the latest surge in COVID-19 cases. Even so, volunteers from her congregation prepared dinner in the evenings and breakfast in the mornings for the guests during the week. They also cook a monthly meal that is distributed through the local social service organization FACETS.

Fairfax County nonprofits and faith groups “work tirelessly to ensure that nobody should have to sleep outside during the winter,” Tom Barnett, deputy director of the county Department of Housing and Community Development, said in an online announcement of the county’s Hypothermia Prevention Program. 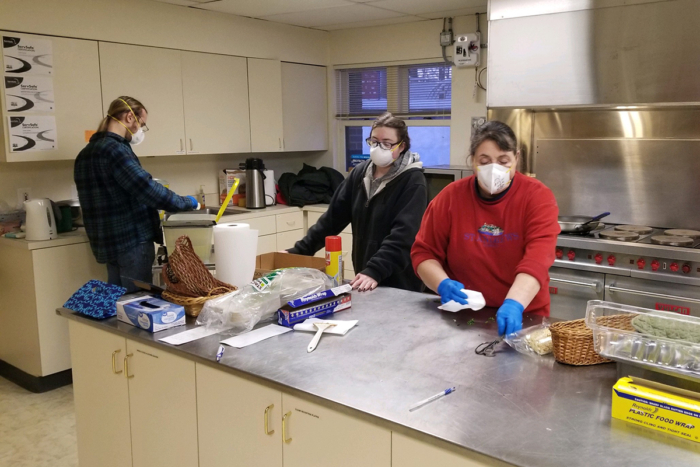 Volunteers work in the kitchen at St. Christopher’s Episcopal Church in Springfield, Virginia, during the week in early January that the church welcomed 25 guests for dinner and overnight stays as part of the church’s homeless outreach. Photo: Carey Connors

People experiencing homelessness in St. Louis, Missouri, sometimes have the option to stay overnight at Christ Church Cathedral. It offers space for up to 14 people seeking overnight shelter from the cold on Tuesday and Wednesday nights, with volunteers providing dinner and breakfast. And for some of the guests welcomed at Christ Church Cathedral, their stay is made a little more comfortable by donations of sleeping mats created by volunteers at St. Michael’s Episcopal Church in O’Fallon, Illinois, a suburb east of St. Louis. The group has meet for four years on Thursdays at St. Michael’s, knitting the mats out of recycled plastic shopping bags.

“The mats are blessed in church and sent along, with our prayers, to the person in need,” Judie Paye, a lead volunteer, told the O’Fallon Progress. “On snowy nights when they don’t have any more room in the shelter, they are able to give them a mat.”

Episcopalians’ baptismal covenant calls on them as Christians “to strive for justice and peace among all people and respect the dignity of every human being.” That commitment underpins much of the church’s work with the homeless, and the potential need is great: In 2020, an estimated 580,000 people experiences homelessness on single night in the United States, according to the latest data from the federal Department of Housing and Urban Development.

In Terre Haute, Indiana, the parish hall is open to those who need a place to stay warm this winter. A line of cots is positioned along a wall next to the tables where parishioners would typically gather for coffee hour on Sundays.

This is the second year that St. Stephen’s has partnered with an organization called Reach Services to provide shelter for the homeless as the thermometer readings dip into the single digits and lower in Terre Haute. On those dangerously cold nights, the parish hall remains open from 5:30 p.m. to 8 a.m., and guests are served dinner and breakfast.

Susan Thompson, Reach Services’ executive director, told the News and Tribune that her organization was grateful for St. Stephen’s hospitality. “We want people facing housing issues to stay well,” Thompson said. “We don’t want any tragedy to result from our not being proactive.”

In Montclair, New Jersey, Toni’s Kitchen is the food ministry at St. Luke’s Episcopal Church, and this month, as the weather turned cold, it received a $10,000 grant from the Montclair Township Council to open as a daytime warming center for people dealing with homelessness.

Anne Mernin, executive director of Toni’s Kitchen, told Montclair Local that the church first served as a warming center a year ago, when the pandemic had forced the closure of other public places where homeless people had gone to warm up.

“The library was closed. The coffee shop was closed. The indoor dining at the feeding programs were closed,” Mernin said, describing conditions during last winter’s coronavirus surge. This winter, the omicron variant has driven COVID-19 case counts back up, again limiting the options available to people trying to come in from the cold, so Toni’s Kitchen committed to opening its doors on weekday afternoons and Saturday mornings through March. Anyone is invited to come for hot food and coffee.

A ministry in the Diocese of Western Massachusetts also recently received a grant to expand its winter outreach to people who are homeless. Manna Community Center at St. John’s Episcopal Church in Northampton is working with the group Community Action Pioneer Valley, which secured $211,000 in federal pandemic relief money for their joint efforts.

One goal of the partnership is to develop a permanent Northampton Community Resilience Hub, which builds on Manna’s existing array of services to people who are homeless, including hot meals, showers and laundry facilities. The city also promotes Manna as a daytime warming center during bitter cold weather.

“As followers of Jesus we are called to walk in the way of love,” Rev. Anna Woofenden, rector of St. John’s, told the Hampshire Gazette. “Walking in the way of love includes feeding the hungry, clothing those who need clothing and caring for our neighbors. The work of Manna and Community Action Pioneer Valley is doing just that.”

Dangerous cold may seem less likely in a place like Hot Springs, Arkansas, but don’t let the city’s name fool you. It isn’t immune to freezing temperatures – and even snowstorms, like the one that hit the region on Jan. 15.

Volunteers from St. Luke’s Episcopal Church have worked with other congregations, nonprofits and city agencies to provide a temporary warming center at the First United Methodist Church during extreme winter weather, especially when temperatures drop to 20 degrees in Hot Springs. The community coalition also was working this month to open a second shelter at Lakeview Assembly of God Church.

“This is part of what we do. It’s the right thing to do,” Sally Carder, St. Luke’s volunteer coordinator, told the Sentinel-Record. “We’re trying to keep people safe.”