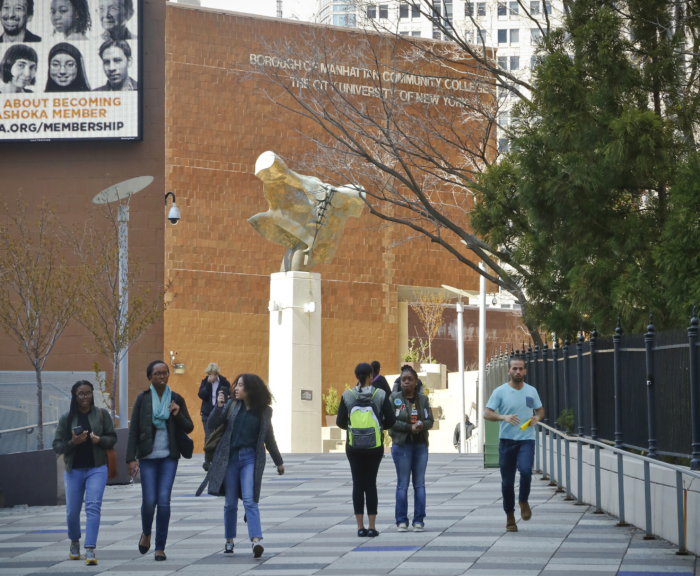 People walk near the main entrance to Borough of Manhattan Community College in New York on April 13, 2017. Photo: Bebeto Matthews/AP

[Episcopal News Service] Trinity Church Wall Street, the Lower Manhattan parish that financially supports nonprofits and churches in New York City and around the world, is now funding an urgent need in its neighborhood: student housing. The church announced in December that it is granting $2 million to provide housing for homeless students enrolled at Borough of Manhattan Community College.

The grant will allow BMCC, a branch of the City University of New York system with a campus in Lower Manhattan, to open a dorm-like space that is easily accessible to the campus, housing up to 50 students for three years. BMCC has narrowed it down to two locations and expects to begin housing students in the spring, said Bea de la Torre, managing director for housing and homelessness at Trinity.

All the students will be housed together with a residential adviser, de la Torre told Episcopal News Service.

“They won’t be scattered around. The idea is also that sense of community that they can build could be really helpful,” de la Torre said. “Any additional supports that they need … are going to be in close proximity to where they’re living, and they can then tap into that.”

A 2018 survey by The Hope Center of 22,000 students across the CUNY system found that 14% had experienced homelessness in the previous year – most of them staying with friends or family temporarily, with 2% in hotels, 1% living outdoors and 1% in shelters. In the same survey, 55% of students reported experiencing housing insecurity in the previous year – defined as “a broad set of challenges such as the inability to pay rent or utilities, or the need to move frequently.”

Those statistics reflect a national problem, fueled by a widespread lack of affordable housing, skyrocketing tuition and stagnant wages. The same Hope Center survey administered to over 195,000 students around the country in 2020 also showed 14% of two-year students reporting homelessness in the past year, and 52% reporting housing insecurity.

De la Torre remembers reading a news story about the 2018 CUNY survey and being “shocked” by the numbers.

“I had been working in the field for over a decade and it was something that I hadn’t really thought about,” she said. “So I sort of became a little bit obsessed with the idea of – we need to do something about this. The problem is so huge.”

This past summer, Trinity gave a planning grant to the nonprofit Neighborhood Coalition for Shelter for a pilot student housing program.

“They’re really looking at a long-term solution,” de la Torre told ENS, “but in the meantime, all these students are homeless or housing-unstable. And we could do something … right in Trinity’s neighborhood.”

When de la Torre reached out to BMCC, “they could not have been more excited about the opportunity,” she said.

BMCC will determine the eligibility criteria because “they’re really the ones who know how to figure it out,” de la Torre said, adding that meeting the students’ housing needs will hopefully allow them to focus on their studies, making them more likely to graduate. She also hopes that the partnership can serve as a model for other institutions.

“One of the amazing things about working at Trinity is that we can do things like this and then show other funders, ‘Come and join us.’ It’s always really hard to get that first funder,” she told ENS.