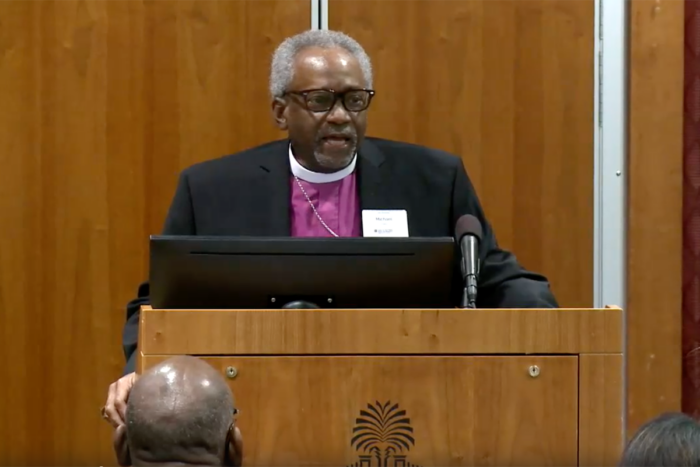 Presiding Bishop Michael Curry is seen on video speaking at the University of South Carolina in Columbia on Oct. 30.

[Episcopal News Service] Presiding Bishop Michael Curry, during a pastoral visit to the Diocese of Upper South Carolina, spoke Oct. 30 at an event hosted by the University of South Carolina’s Center for Civil Rights History and Research, reaffirming his calls for racial reconciliation in the name of sharing God’s love.

The weight of confronting the racism of American history need not hold back Americans as they strive to move forward together, Curry told attendees gathered at the university in the state capital, Columbia. By learning from that history, Americans can “turn in a new direction,” he said, and “join hands together, descendants of former slaves and descendants of former slave owners, join hands together from what we have learned and then build a new world, a new society, where there is liberty and justice for all.”

About one million Christians in South Carolina are members of the bishops’ churches, Upper South Carolina Bishop Andrew Waldo said. He and his fellow bishops have worked together for several years on various social justice causes, from humane treatment of migrants to education reform.

The event featuring Curry was the latest in the fellowship’s annual dialogue series “on matters of moral importance to our various members, the communities in which they live and work, and the larger society in which God has placed us,” Waldo said as he introduced Curry.

Curry spoke for about 40 minutes, developing the theme of the power of love, which has become a familiar thread through his sermons, most notably at the 2018 royal wedding. In Columbia, he spoke of political and social forces that increasingly pit people against each other, in the United States and around the world.

“At the root of it is deep spiritual maladies that, if left unhealed, will continue to bedevil and fight against the possibility of a multiracial, pluralistic democratic society,” he said. “We are caught up in a mess, and we have got to heal this land.”

Later in the day, Curry met with and spoke to college students at an event hosted by Trinity Episcopal Cathedral in Columbia. He also preached the next day at the cathedral’s Oct. 31 Holy Eucharist. Video of Curry’s Sunday sermon can be viewed on the diocese’s Facebook page.