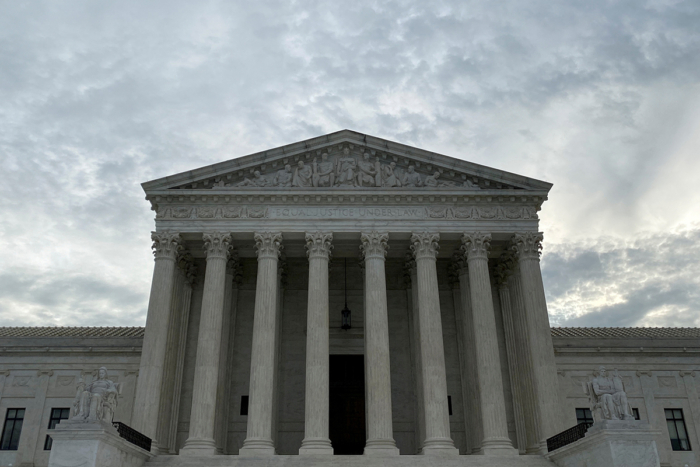 Episcopal leaders joined a “friend of the court” brief in a gun control case going before the U.S. Supreme Court on Nov. 3. Photos: Reuters

[Episcopal News Service] The U.S. Supreme Court on Nov. 3 will hear arguments in a gun control case that could limit how far cities and states may go to regulate whether and when Americans can bring guns into public places, potentially increasing the risk of violence at houses of worship.

The case focuses on a 108-year-old New York law that requires gun owners to show “proper cause” for self-defense before they can receive permits to carry concealed guns in public. Two gun owners sued to challenge that requirement after they were denied the permits. The Episcopal Church’s presiding officers have opposed the gun owners’ lawsuit, joining an interfaith group of more than 400 religious leaders in filing a “friend of the court” brief on Sept. 21.

Their brief warned that throwing out the New York law could undermine gun regulations in that state and in other jurisdictions, making it more likely that guns will be brought into churches and other “sensitive places” where guns usually are prohibited.

“Reducing threats to Americans gathered for religious observance – as well as those participating in religious ministry within the community – is an important state interest that justifies reasonable firearm regulation,” the religious leaders say in the court brief. “However, regulating firearms within houses of worship alone is not enough. New York’s law further helps address these threats by reducing the casual public carrying of concealed weapons, and thus the likelihood of gun violence in public places – including houses of worship.”

The brief was signed by Presiding Bishop Michael Curry and the Rev. Gay Clark Jennings, president of the House of Deputies, along with other Episcopal clergy, including more than 20 Episcopal bishops who are members of the Bishops United Against Gun Violence network.

“This is a critical issue for our congregations, but even more so for faith communities that are too often the target of hate crimes,” Jennings said Oct. 25 in remarks to Executive Council. “I am proud that General Convention has put us on record in favor of sensible gun restrictions and that we are able to make a witness in this critical case.”

She noted that the religious leaders’ brief cites a General Convention resolution from 1976 supporting “federal, state and local legislation aimed at controlling the sale and use of hand guns” and a 2015 resolution urging lawmakers to pass laws requiring permits for citizens to carry concealed weapons.

Connecticut Bishop Ian Douglas, a co-convener of Bishops United Against Gun Violence, also signed the brief. He helped create the network of bishops after the December 2012 killing of 26 students and educators in a mass shooting at Sandy Hook Elementary School in Newtown, Connecticut.

Douglas, in an interview with Episcopal News Service, raised concerns that the assertion of Second Amendment rights by the plaintiffs in the New York lawsuit could intersect with the First Amendment rights of churches and other houses of worship. The lawsuit doesn’t challenge the rights of congregations to worship in gun-free buildings, but overturning government restrictions on carrying guns in public could heighten the general threat to houses of worship, he said.

“This is a particularly important because, sadly, all too often places of worship are targets for mass shootings,” Douglas said. He cited the massacres in 2012 at the Sikh Temple of Wisconsin in Oak Creek; in 2015 at Mother Emanuel African Methodist Episcopal Church in Charleston, South Carolina; in 2017 at the First Baptist Church in Sutherland Springs, Texas; and in 2018 at the Tree of Life Synagogue in Pittsburgh, Pennsylvania.

In 2008, the Supreme Court struck down a handgun ban in Washington, D.C., ruling in the case of District of Columbia v. Heller that the Constitution protects citizens’ right to keep guns in their homes. The court did not rule on how far governments could go to regulate guns outside people’s homes.

The new case before the Supreme Court, New York State Rifle & Pistol Association v. Bruen, was filed by Robert Nash, Brandon Koch and a gun rights advocacy group. The two men had received licenses to carry guns outside their homes for target shooting and hunting, but they were denied concealed carry permits for failure to show a special need to defend themselves.

New York is one of seven states requiring “proper cause” to obtain a license to carry a concealed gun outside the home, according to the Giffords Law Center, which advocates for stricter gun laws. The other six states are California, Delaware, Hawaii, Maryland, Massachusetts and New Jersey. They are among the 29 states that generally require a permit for gun owners to carry concealed weapons in public, while no permit is necessary in the other 21 states.

New York officials, in arguing against the challenge to the state’s “proper cause” law, cite part of the Heller decision, in which Justice Antonin Scalia made clear that the 2008 ruling should not cast doubt on other firearms prohibitions, such as “laws forbidding the carrying of firearms in sensitive places.”

In written arguments filed in advance of this week’s Supreme Court hearing, the attorneys defending the New York law argue it is “a historically grounded approach to protecting sensitive places of the type that every state, the federal government, and this court have recognized the need to safeguard.”

Striking the law down “would also jeopardize the firearm restrictions that all states and the federal government have adopted to protect the public in sensitive places where people typically congregate — settings like courthouses, airports, subways, sports arenas, bars, gaming facilities, houses of worship and schools.”