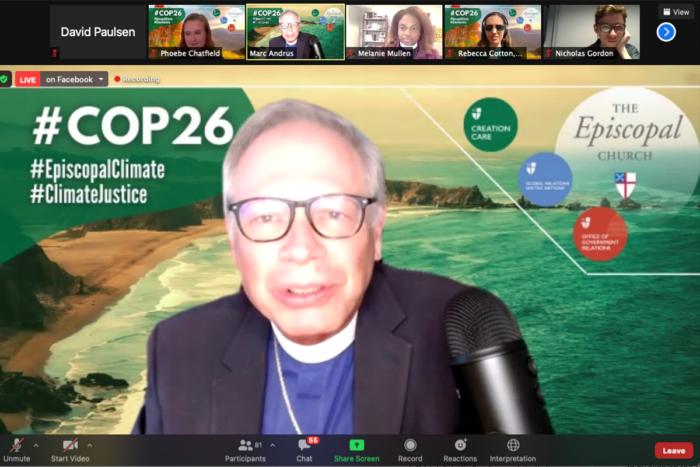 California Bishop Marc Andrus speaks during an introductory webinar Oct. 28 that looks ahead toward the Episcopal delegation’s participation in COP26.

[Episcopal News Service] A large delegation of Episcopalians will represent Presiding Bishop Michael Curry from Oct. 31 to Nov. 12 at this year’s United Nations climate conference, COP26, as online meetings are providing opportunities for greater participation across The Episcopal Church.

COP26, known officially as the 26th Conference of the Parties to the United Nations Framework Convention on Climate Change, will be a hybrid conference because of the COVID-19 pandemic, with the in-person part of the conference taking place in Glasgow, Scotland.

California Bishop Marc Andrus leads the Episcopal delegation alongside Lynnaia Main, The Episcopal Church’s representative to the United Nations. They and other staff will be joined by 24 delegates, selected from 70 people who applied for this year’s delegation. The church offered a preview of the delegation’s upcoming work in a webinar hosted Oct. 28 on Zoom.

The Rev. Melanie Mullen, director of the church’s Office of Reconciliation, Justice and Creation Care, welcomed about 85 webinar participants from across the church, many of them delegates, noting that Executive Council had just concluded its Oct. 25-28 meeting.

“The church is discussing all the ways in which we need to be more available, more relatable, do more work on behalf of the world, and so you are here as part of this church witness for the work of COP,” Mullen said.

The Episcopal delegates to COP26 will be divided into two groups, with one attending the first week and the other the second week, Andrus told Episcopal News Service in an interview before the webinar. Afterward, the delegates are expected to share what they’ve learned and discussed at the conference with their own communities, to increase awareness of global efforts to fight climate change.

This year’s conference focuses on the aggressive steps member nations must take to fulfill the landmark 2015 Paris Agreement, in which close to 200 countries set voluntary goals aimed at limiting global warming below 2 degrees Celsius above preindustrial levels, settling on 1.5-degree target. At the time, the goal was meant to mitigate the catastrophic effects of warming temperatures on the Earth’s surface, which causes melting glaciers; rising sea levels; and more frequent and extreme hurricanes, droughts, snowstorms and wildfires. Since then, climate scientists have a warned that climate change’s threat to humanity is at a “code red,” as warming is close to the 1.5 degree threshold.

“We’re going to have to fight to keep every fraction of a degree from taking place,” said Andrus, who also led the Episcopal delegation to the COP21 in Paris in 2015. He noted that climate change’s effects already are being felt. “This COP is important to me because I serve a diocese in California where drought and heat are threatening jobs and lives,” he said.

The impacts are widespread, he added, so addressing climate change “is vital to all of us.”

The United States once was the largest producer of greenhouse gases. It now ranks second worldwide to China. In 2009, the U.S., China and other developed countries pledged to increase their financial support for developing nations’ efforts to tackle climate change. So far, they have fallen short of their goal of providing $100 billion a year.

Andrus emphasized the ecojustice issues raised by the developing climate crisis – “the way climate change effects fall more heavily on Black, brown, Indigenous and economically disadvantaged communities,” he said. In that context, he thinks the Sunday Gospel reading for Oct. 31 is particularly appropriate. “You shall love your neighbor as yourself,” Jesus says in Mark 12:28-34.

Fighting climate change, then, is “a deeply Christian response,” Andrus said, which is why The Episcopal Church is deeply engaged with the issue.

During the webinar, some members of the delegation shared their hopes for COP26. The Rev. Rachel Taber-Hamilton, a Diocese of Olympia priest who is Shackan First Nation, said that from an early age, she was taught her people’s traditional beliefs about the connection between human life and the natural world.

“The needs of the people are intimately connected to the needs of Earth, on which we rely,” Taber-Hamilton said. During COP26, “my hopes include wanting to bring truly deep and rich spiritual traditions of our peoples – our Indigenous peoples, our Christian peoples, our diverse representatives of traditions across the Earth – to bring our sensibilities of connection and spirituality into our dialogue with one another.”

Creation care is one of The Episcopal Church’s three top priorities during Presiding Bishop Michael Curry’s primacy, in addition to racial reconciliation and evangelism. General Convention has passed numerous resolutions on the issue, whether supporting federal climate action or pledging to mitigate the church’s own impact on the environment. Through its Office of Governmental Relations and the Episcopal Public Policy Network, the church has advocated for government policies in line with General Convention stances on climate change.

In 2019, Andrus’ Diocese of California led the development of an online Carbon Tracker, which enlists other dioceses, congregations and individual Episcopalians to pledge to reduce their carbon footprints, by taking actions such as installing energy-efficient light bulbs, switching to solar power, and using public and other alternative transportation methods more often.

Nearly 3,000 households have participated in the Carbon Tracker so far, Andrus said, and church leaders are working to “scale up” participation beyond The Episcopal Church while continuing to encourage all Episcopalians to do their part in caring for God’s creation.

The political landscape has changed dramatically since the Paris Agreement of 2015. In 2017, President Donald Trump pledged to withdraw with United States from the agreement, and in 2020, the U.S. became the only country to walk back its promise to reduce emissions, threatening to undermine global commitments.

Episcopal leaders responded by aligning the church with the “We’re Still In” movement, a coalition of faith partners, governments, nongovernmental organizations and companies that vowed to live up to the Paris Agreement’s commitments, even if the federal government wouldn’t. In 2018, the 79th General Convention approved a resolution titled “Episcopalians Participating in Paris Climate Agreement” that called on Episcopalians and congregations to set examples “in the spirit of the Paris Climate Accord, by making intentional decisions about living lightly and gently on God’s good earth.”

This year, President Joe Biden signed an order restoring the country’s participation in the Paris Agreement the day he took office on Jan. 20. His administration followed up in April by setting a goal of cutting American greenhouse gas pollution in half by 2030, compared to 2005 levels.

Since 2016, The Episcopal Church has held U.N. observer status, which allows members of the Episcopal delegation to brief U.N. representatives on General Convention’s climate resolutions and to attend meetings in the official zone, which this year will extend online.

All Episcopalians and other members of the public are invited to two additional webinars organized by the church’s delegation. A worship service, “Liturgy for Planetary Crisis,” will be held at 11 a.m. Eastern time Nov. 6, and a closing event will take place at 2 p.m. Nov. 12 to summarize the delegation’s work. Those interested in attending are asked to register in advance.