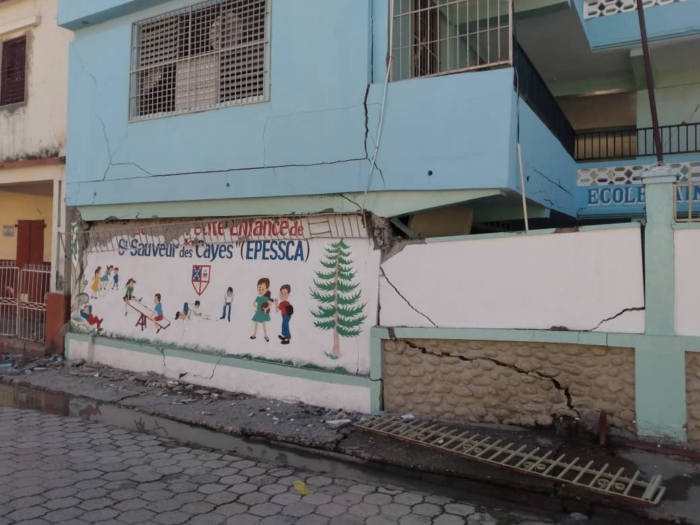 The St. Sauveur des Cayes School in Les Cayes, Haiti, was damaged beyond repair by the Aug. 14 earthquake and will have to be demolished and rebuilt. Photo: Education Equals Hope

[Episcopal News Service] In the 12 days since a 7.2 magnitude earthquake struck Haiti on Aug. 14, and the subsequent drenching rains of Tropical Storm Grace, Episcopalians there and their ministry partners across The Episcopal Church continue to help devastated communities.

As of Aug. 24, more than 2,200 have died and some 12,300 have been injured. Over 1.2 million people have been affected, with nearly 650,000 in need of emergency humanitarian assistance in the three most affected departments (Sud, Grand’Anse and Nippes), where an estimated 130,000 homes have been damaged or destroyed, according to the United Nations. (A U.N.-generated map shows the scope of the damage and ensuing needs.)

Many roads and bridges of the country’s already fragile infrastructure have been rendered unusable, making access for relief workers and supplies even more challenging. Many hospitals and clinics were also severely damaged.

Episcopalians with long-standing partnerships in Haiti responded quickly after the earthquake. For example, the Diocese of Upper South Carolina, with 40 years of partnerships in Haiti, sent money donated by parishes and individuals to Haiti by way of Partners in Health, a health care organization that has historic connections to the diocese. Much of the diocese’s work in Haiti now supports Zanmi Lasante, the Haitian branch of Partners in Health.

Upper South Carolina has built more than 15 schools in the village of Cange and, over the years, has provided scholarships to area children to help their families cover school-related costs. Some of those students grew up to become doctors and nurses at the Partners in Health hospital in nearby Mirebalais, where they are now treating people injured in the quake, according to the Rev. Susan Louttit-Hardaway who chairs the diocese’s Commission on Mission and International Concerns.

“Forty or so years of partnership with Cange and perhaps we are looking at what God had in mind all along,” she told Episcopal News Service.

Despite the COVID-19 pandemic and ongoing violence in Haiti, Walent traveled there after the quake, bringing with him supplies requested by ministry partners in Petit Trou de Nippes. Those included medical and school supplies, hygiene kits, and tents to be used as classrooms and clinics. A school supported by Locally Haiti is serving as a shelter, he said.

“We’ve been in this community for 33 years and these relationships are very personal, so just to be there in person and to listen to people” is as important as the supplies brought, Walent told Colorado Public Radio.

Episcopal Relief & Development responded within days with an initial grant to provide direct assistance to 400 families in hard-to-reach areas, and on Aug. 24, it announced a partnership with Church World Service to enable the local health care center in Pestel, a coastal community due north of Les Cayes, to provide primary medical care to more than 10,000 people. Children and adults in the area will also receive community-based psychosocial support through existing Wozo clubs. These clubs were established by a local organization, Wozo Haiti, after the 2010 earthquake and later expanded through a partnership with Episcopal Relief & Development.

Grey Dove Inc., a medical ministry founded after the 2010 earthquake in Haiti by Episcopal deacon the Rev. Clelia Garrity, last week sent medical and surgical supplies to the Rev. Kesner Ajax in Les Cayes, including vials of injectable antibiotics, which Garrity said are needed for wound care. Grey Dove’s mission is to provide sustainable health care in developing communities in Haiti and elsewhere.