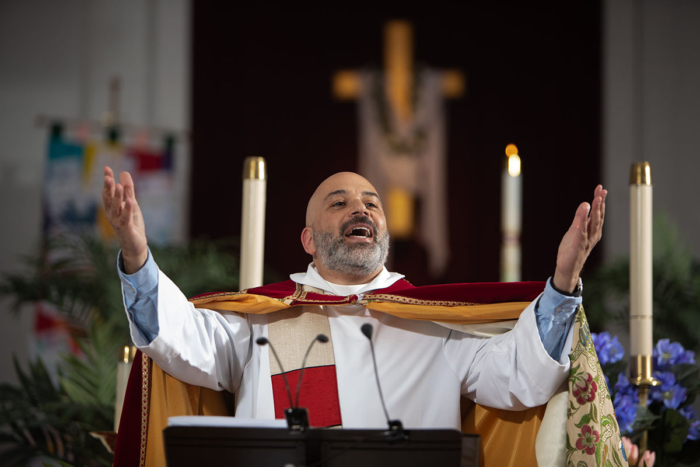 The Rev. Halim Shukair was born into a Christian family in Lebanon. He was ordained an Episcopal priest in 2018 and serves as priest-in-charge of Mother of the Savior in Dearborn, Michigan. Photo: Bechara Damouni

[Episcopal News Service] Two Episcopal congregations in Dearborn, Michigan — one Arabic-speaking, the other English-speaking — have been sharing worship space, liturgy, Bible study, conversation and food, and are partnering to create beloved community together.

Partnership in Faith is a unique relationship between Christ Episcopal Church and Mother of the Savior, a blended Episcopal-Lutheran congregation in Dearborn, a Detroit suburb. The collaboration fosters intercultural relationships, said the Rev. Terri C. Pilarski, rector of Christ Church, and presents an opportunity to welcome people who may feel isolated or marginalized.

Christ Church is working on being “adaptive to others, listening, learning and loving our neighbor,” Pilarski said. “It’s also about Mother of the Savior as this amazing congregation of Arabic-speaking Christians offering a powerful witness to the world. Arabic-speaking Christians have been part of the Christian tradition since the first Pentecost, yet they have and continue to suffer as a marginalized community. They have a faith that is deep and beautiful.”

“This is the first time The Episcopal Church in the United States has joined with Arab and Middle Eastern Christians, and the first time the liturgy has been translated into Arabic and that there is worship in Arabic,” the Rev. Halim Shukair, priest-in-charged of Mother of Our Savior, told Episcopal News Service.

The Detroit area is home to one of the largest populations of Arabs in the United States, and Shukair is hoping more congregations will follow the example of the partnership. 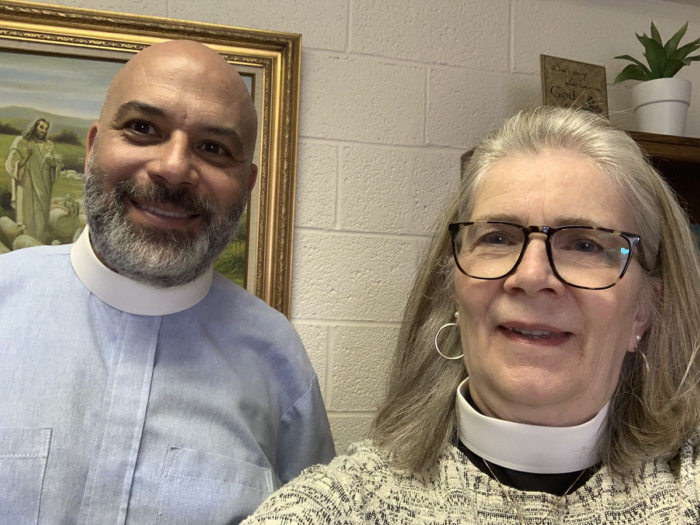 Partnership in Faith has received support from The Episcopal Church through its Becoming Beloved Community grant program. The Rev. Halim Shukair, priest-in-charge of Mother of the Savior, left, and the Rev. Terri C. Pilarski, rector of Christ Church, hope the Dearborn, Michigan-based partnership will inspire others. Photo: Selfie by Terri C. Pilarski

Born in Lebanon, Shukair joined The Episcopal Church in 1999 while studying at the Near East School of Theology in Beirut. He was confirmed in 2004 and eventually, on the advice of former Jerusalem Archbishop Suheil Dawani, studied at Virginia Theological Seminary. He was ordained an Episcopal priest in 2018 on behalf of Dawani by then-Michigan Bishop Wendell Gibbs and first served as a curate at Christ Church before he became priest-in-charge of Mother of the Savior.

“The vision is to have a new community,” he said of Partnership in Faith, which received a Becoming Beloved Community grant from The Episcopal Church in 2020. “The two congregations together have this mission to spread the love of Christ here in Dearborn and the neighborhood. Knowing about us and our stories and experiences can enrich our faith.”

As the partnership has developed, members of Christ Church, founded 155 years ago, began learning about the Arab Christian presence in the area, Pilarski said.

“We had done a lot of intentional work to build relationships with mosques in the area … and now we’ve come to understand that, of the 40% of the people in Dearborn who are Arabic-speaking, 5% are Christian. We didn’t realize there were Arabic-speaking Christians in our area. They are the marginalized in our neighborhood.”

Mother of the Savior initially began as a church plant by the Evangelical Lutheran Church in America, which still provides some financial support. Gibbs, who retired in early 2020, first envisioned Christ Church’s ministry partnership, and the vision has been supported by his successor, Bishop Bonnie Perry.

“We saw this opportunity,” Perry told ENS. “Dearborn is one of the most heavily Arab cities in the country, but this is a population that is not being connected with, that is kind of ignored.

“Halim is clear that we fit a place, we fill a niche,” Perry told ENS. “There are young people who want a different perspective and who want to be able to speak openly about social issues, like sexuality. This community offers a place for folks to do that, and from a variety of different Arabic-speaking countries.”

When Perry asked Widad Sbab, a member and treasurer of Mother of the Savior, to read a lesson in Arabic at her Feb. 8, 2020, consecration, it sent a message that “you matter,” Perry said. “These are our sisters and brothers, and maybe it doesn’t have to be a ‘we’ and a ‘them,’ but an ‘us.’ I think that’s what we’re trying to be clear about, that we are one in Christ.”

Sbab, 80, a Palestinian-American who moved to Detroit from Jerusalem’s Old City more than 50 years ago, said the invitation signaled a sense of honor, value and belonging.

Mother of the Savior parishioners come from Lebanon, Syria, Palestine, Iraq and Jordan. Others, like Savanah Rayyan, 21, were born in the United States.

Partnering with Christ Church felt like “a cool transition and was very eye-opening. I’ve grown up around Middle Eastern culture and have always gone to an Arabic-speaking church,” said Rayyan, a Wayne State University student.

For Rayyan, who says she is not “100% fluent” in Arabic, beginning to sing songs in English at special shared liturgies like Christmas and Easter “was exciting for me … a beautiful thing.”

In addition to funding from the Lutheran and Episcopal churches, the partnership has received support from Baptized for Life, a five-year discipleship collaborative initiative with Virginia Theological Seminary, and from the Lilly Endowment.

“We used it to facilitate events for the two congregations, including purchasing computers for people during COVID so we could continue to meet and worship on Zoom and Facebook Live,” Pilarski said of the financial support. Partnership in Faith has also been collaborating with Life Around the Table: Eating Together Faithfully, a United Methodist Church ecumenical, community-based resource for congregations and communities to explore food and food systems from a Christian perspective, Pilarski said.

Each church developed a covenant team, which met for weekly dinners that included prayer, Scripture readings, essays about justice around food and food scarcity, and faith conversations, she said. The Scripture and essay readings were done in both languages, with members of both congregations seated at tables together with an interpreter and facilitator for each session. One goal was to develop the capacity to listen without judgment or comment, so everyone would feel valued and heard and “not to assimilate Mother of the Savior into us … that we would have our own distinct identities,” she said.

As both congregations began to learn each other’s names and experiences, they shared a lot of laughter, as well as faith, recalled Stephanie Mulkern, 68, a 42-year member of Christ Church.

“While we shared meals, we were all able to realize that we shared faith, too, a faith we each had in God.”

She recalled gathering to make pizza from scratch, and at another dinner, preparing a shawarma dish, as well as discussions about food and sustainability.

Pilarski said she recognized “from the beginning that the primarily English-speaking European-descent people, the dominant culture people, although we have every intention of embracing diversity, we don’t always know how to do that effectively.”

Shukair said his vision of cultural bridge-building has been strengthened by the experience and especially by Presiding Bishop Michael Curry’s signature Way of Love. “The Episcopal Church can bring a new perspective for this community,” he said about Mother of the Savior. “It can bridge the gap and help the youth to find their humanity, dignity and to accept and follow Jesus in this new way. They are very happy with it.”

A long-term goal is to stabilize both congregations, she said. With an average Sunday attendance of about 35, Mother of the Savior could grow into a self-sustaining mission-focused parish. And for Christ Church, whose pre-pandemic average attendance was about 70, the goal would be to reverse a period of decline, Pilarski said.

Karen Beck, 65, a Christ Church member since 2016, said she is eager to resume the weekly dinners and was heartened to participate in a recent Saturday afternoon work session to prepare the church for resuming post-pandemic worship.

“Often, just doing something together with someone else is how you get to know them,” she said. “It opens the opportunity to chat with someone. I really would like to see us build more bridges and to cross those bridges more.”