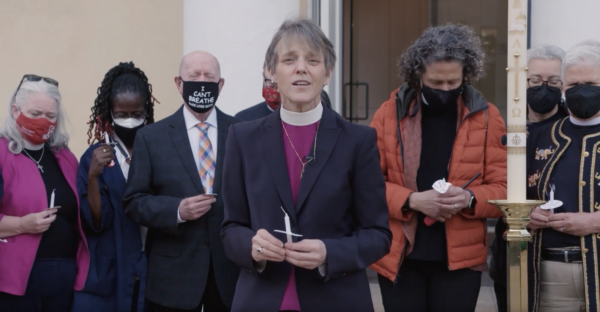 The Rt. Rev. Mariann Budde speaks during a memorial service for George Floyd and other victims of racist violence and police brutality. Photo: Diocese of Indianapolis

[Episcopal News Service] Bishops, priests and laypeople from across The Episcopal Church gathered online on May 25 for a memorial service to mark the first anniversary of the murder of George Floyd. The multi-diocesan effort included musical performances, a message from Presiding Bishop Michael Curry and a prayer of lament filmed in George Floyd Square in Minneapolis, Minnesota, where then-police officer Derek Chauvin killed Floyd by kneeling on his neck for over nine minutes on May 25, 2020.

The service honored the memory of Floyd as an individual, but also as one of many people of color who have been killed by police in the United States, and also to honor the national movement to end police brutality and systemic racism that his death accelerated.

“When America saw that video taken by that dear 17-year-old child, when the world saw George Floyd murdered by those charged to protect and serve, something moved,” Curry said in his sermon. “Something changed. And while we do not know how it will unfold, people began to pray with their lips and with their legs.”

The liturgy, designed by Missouri Bishop Deon Johnson, opened with statements from several other bishops, putting Floyd’s death in context and affirming the church’s ongoing commitment to racial justice.

“Together we stand against the tide,” said Colorado Bishop Kym Lucas. “Because no matter what may come, no matter what the tide may bring, we are here, and we are far stronger united as one, caring for our neighbors in Christ.”

“Events like this ongoing viral pandemic and the pandemic of racism and violence which took the life of George Floyd and many others offer us more questions than answers,” said Michigan Bishop Bonnie Perry, “but we gather to be close to each other, to be in community, to remember. We stand with each other and with our siblings who tragically continue to lose their lives in our communities, our nation, and around the world.”

A slideshow of Episcopalians at Black Lives Matter protests – including at St. John’s Church in Washington, D.C. – accompanied a performance of “He’s Got the Whole Word in His Hand” by musicians from the Episcopal Church of the Good Shepherd in Lexington, Kentucky.

After a Scripture reading, Minnesota Bishop Craig Loya and the Rev. Robert Two Bulls, missioner for the Department of Indian Work and Multicultural Ministries in the Diocese of Minnesota, prayed a psalm of lament written by the Missouri bishop at the site of Floyd’s murder. 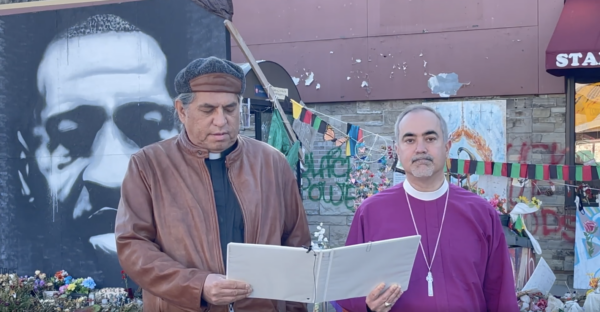 The Rev. Robert Two Bulls and the Rt. Rev. Craig Loya pray during the memorial service. Photo: Diocese of Indianapolis

“How lonely sits our neighborhood, O God!” they prayed. “How we weep bitterly in the night! Silent tears have become our song. ‘Gone too soon’ has become our lament.”

The service was then silent for 9 minutes and 29 seconds – the amount of time that Chauvin pressed his knee into Floyd’s neck. During the silence, a slideshow played that showed Floyd’s place in a long line of African American victims of racist violence and police brutality. Dozens of faces – from recognizable names like Emmett Till, Martin Luther King Jr., Michael Brown and Breonna Taylor to lesser-known victims like Eleanor Bumpurs and Alonzo Ashley passed across the screen, punctuated by bells. The montage showed the sobering toll on African Americans that had been mounting long before Floyd’s murder.

Curry, drawing from Harriet Tubman and Frederick Douglass in his sermon, commended Episcopalians for “praying with your lips and with your feet” by marching for change. He encouraged the church not to give up, even when the struggle seems fruitless or forgotten.

The job of Christians, he said, is “changing this world from the nightmare it often is into the dream that God has intended, changing and transforming human lives and social institutions.”

The abolition and civil rights movements took decades of work that often seemed hopeless, he recounted, sharing the story of how his grandfather marched with other sleeping car porters in the 1940s for fair wages, equal rights and an end to lynching. But the lynchings did not end; Emmett Till’s murder in 1955 galvanized the public in a way similar to Floyd’s, he said. Till’s murder inspired Rosa Parks to stand her ground on a bus in Montgomery, Alabama.

“It is sometimes easy to despair and give up,” Curry said. “And while this is a normal and natural human emotion. It is not an option for us.”

Standing at a memorial to Michael Brown, an unarmed Black teenager killed by police in 2014 in Ferguson, Missouri, Johnson ended the service with a gesture of hope. 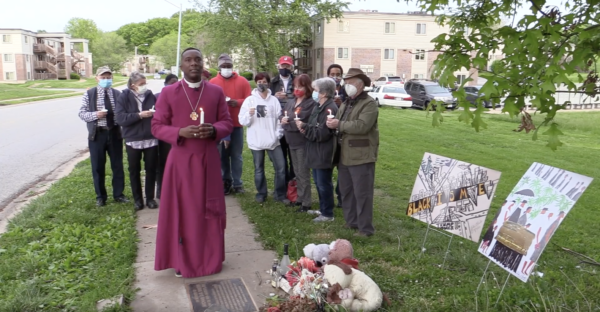 “A single light has the power to dispel even the longest shadow,” he said, lighting a candle and sharing the flame with others gathered there. Standing in front of St. John’s Church in Washington, Bishop Mariann Budde did the same. Then other groups from dioceses and seminaries across the U.S. and Canada held up their candles on Zoom, showing the progression of the flame into the world.

“As we share the light from these many flames, may these candles be symbols of our burning hope and our shining light, that we may act out of hope and compassion to mourn with those who grieve,” Johnson said.