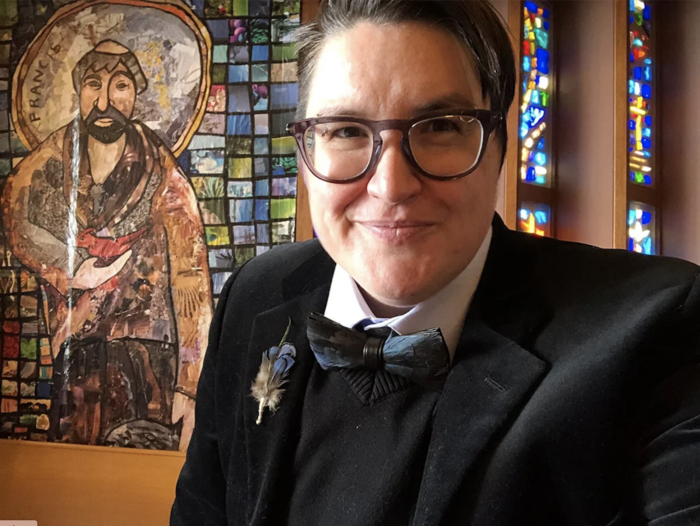 The Rev. Megan Rohrer was elected bishop of the Evangelical Lutheran Church in America’s Sierra Pacific Synod on May 8, 2021, becoming the first transgender person to serve as bishop in any of the major Christian denominations in the United States. Photo courtesy of Meghan Rohrer via RNS

[Religion News Service] This isn’t the first time the Rev. Megan Rohrer has been made bishop.

Rohrer, who uses the pronouns they/them, was erroneously labeled a bishop several years ago in a Norwegian news report while speaking at a celebration of St. Olaf in the country.

That mistake led the Lutheran pastor on a pilgrimage to Switzerland to visit the home of their ancestor, Nicholas von Flüe, the patron saint of Switzerland.

It also led Rohrer to believe it might be possible for a transgender person to become bishop.

“So much of my life is spent talking about people wondering if I’m a sinner, and so I wanted to take intentional pilgrimage time and dwell with this idea: If I’m related to a saint, let’s think of how would my life be different if I imagined myself in this saintly bloodline, like, as my call,” Rohrer told Religion News Service.

On May 8, the Sierra Pacific Synod of the Evangelical Lutheran Church in America made it official, electing Rohrer as the fifth bishop of its nearly 200 congregations in California and Nevada.

“Two and a half days later, I think I believe it now because of the overwhelming accolades that I’ve received from people — the number of people who are so proud to have me as a leader — and so I’m excited to step into that role with confidence now, but it’s confidence I’ve borrowed from these people who have lifted me up,” Rohrer said on May 11. 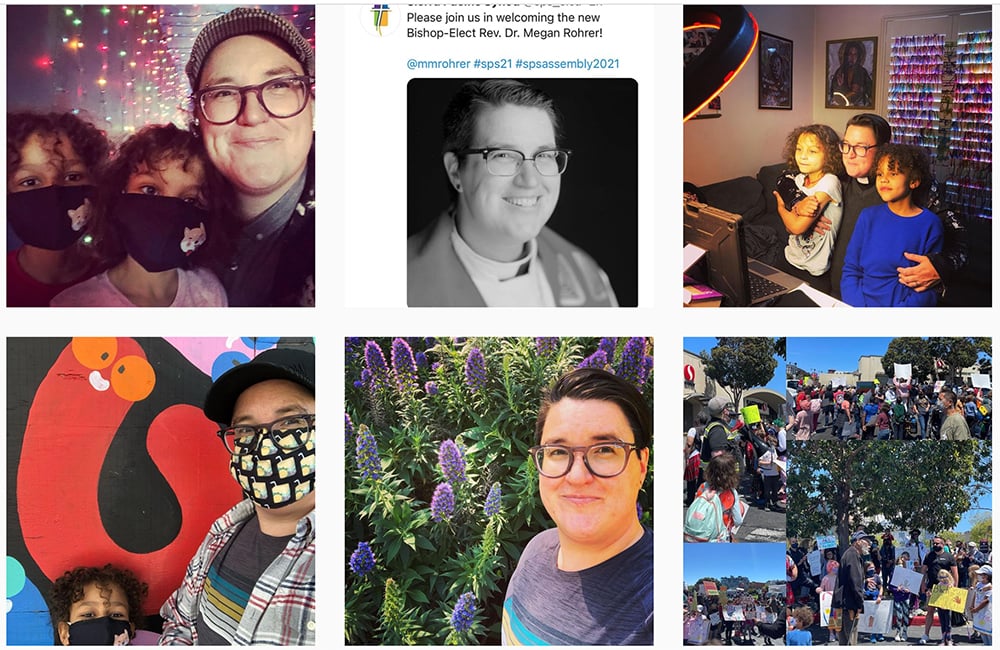 Ellen Armour, chair in religion, gender and sexuality at Vanderbilt Divinity School in Nashville, Tennessee, called Rohrer’s election “groundbreaking” after decades of debate over LGBTQ inclusion in mainline Protestant churches. That debate currently is threatening to split the United Methodist Church, which is in full communion with the ELCA.

“To me, this is really a huge signal; it’s not just, ‘OK, we’re going to include you. We’re going to open the door just a crack enough to let you in because you fit enough norms of what we’re expecting,’ but it’s actually a celebration of the gifts that trans people, LGBTQ people, bring to the church,” Armour said. “That’s a new day.”

Rohrer follows the Rev. Mark W. Holmerud, whose scheduled retirement in 2020 was delayed by the COVID-19 pandemic.

“My prayers will be with Bishop-Elect Rev. Dr. Megan Rohrer as they prepare to take leave of their current ministry and assume the role of bishop for our Sierra Pacific Synod,” Holmerud said in a statement.

“I am confident that they will be blessed by the people of our synod through prayer as they serve, as well as the other bishops and staff members of our Region Two and the Conference of Bishops. May God’s peace and guidance of the Spirit be with Bishop-Elect Rev. Dr. Megan Rohrer as they serve and lead in our midst. They will build on the pandemic experience and move the Sierra Pacific forward.”

The retiring bishop wasn’t the only one to extend well-wishes.

Many Lutherans used social media to express their excitement at the election of the first transgender bishop. That includes ReconcilingWorks, an organization advocating for the full inclusion of all LGBTQ Lutherans, and Extraordinary Lutheran Ministries, whose precursor, the Extraordinary Candidacy Project, had ordained Rohrer extraordinarily in 2006, before the ELCA ordained LGBTQ clergy. (The ELCA officially changed its policy in 2009 and recognized Rohrer’s ordination the next year, making them the first openly transgender pastor in the denomination.)

And Presiding Bishop Elizabeth Eaton, who heads the ELCA, told RNS that while she recognized the historic nature of Rohrer’s election, the appointment was not only about their gender, but about all the gifts the bishop-elect brings to the church, including their focus on those who have been marginalized.

“What this means for the whole denomination, I believe, is that when we say, ‘All are welcome, and there’s a place for you here,’ we mean this,” Eaton said. Rohrer, who is 41, told RNS, “When I was first becoming a pastor, I didn’t imagine being on the official pastor list of the ELCA, let alone the ELCA issuing a press release that I’ve been elected a bishop.”

Rohrer was baptized in an ELCA church in Baltic, South Dakota, just 24 days after they were born. But, Rohrer said, their Lutheran bona fides stretch back even further — to family from Germany and Norway who immigrated to the United States generations ago.

“Our baptismal theology is very strongly about no matter what you do, on accident or on purpose, you can’t screw up God’s love for you,” they said of their Lutheran lineage.

“I just believed that was true and kept believing that was true, even when folks maybe were curious how God could use me, of all people. I really was more interested in figuring out how I could translate good news to people who were curious about how God was using people beyond the scope of their imagination.”

That’s been the focus of Rohrer’s ministry, first as the executive director of a nonprofit serving the homeless and hungry in San Francisco.

Rohrer has carried that theme to the congregations they have pastored, too, including the Community of Travelers at St. Aidan’s Episcopal Church and Grace Lutheran Church, both in San Francisco. Rohrer currently leads Grace while serving as community chaplain coordinator for the San Francisco Police Department.

Rohrer has a penchant for creative thinking — they have written Masses based on the music of Lady Gaga and the Beatles, rewriting lyrics to help people who have been hurt by the church begin to heal and feel more comfortable with the liturgy. The inspiration came from Protestant reformer Martin Luther — from whom Lutherans get their name — who famously rewrote pub songs into hymns.

They have also planted succulents for a homeless garden and created a tile mosaic depicting a chapter from Isaiah on the church stairs — anything, Rohrer said, that might help somebody notice “what God’s love is up to.” That includes social media and pop culture — Rohrer made an appearance on popular Netflix show “Queer Eye” and did an interview with Cosmopolitan magazine.

“I think part of the reason I ended up doing things with Cosmo and ‘Queer Eye’ is because my congregation embraced this idea that social media is evangelism,” Rohrer said.

Rohrer has also self-published dozens of books for both children and adults — including several books reflecting on pilgrimages they have taken to Norway, Iceland and Philadelphia — as a way to diversify income for their congregation.

Pilgrimage, Rohrer said, is actually one of the best metaphors they’ve found to explain the trans experience to fellow Christians.

“The trans journey is very similar in that it’s hard to explain to people who haven’t been on the pilgrimage,” they said.

Rohrer will be installed as bishop on Sept. 11, 2021, at Saint Matthew Lutheran Church in Walnut Creek and hopes to continue their ministry of translating the gospel for the curious in that role, as well.

With the attention their historic election has brought, Rohrer hopes to focus on evangelism.

It’s humbling and honoring, Rohrer said, and it’s something they recognize is “about more than just me, it’s about what it represents to people.” Rohrer also said they hope people will pray for their safety and the safety of their family, as being a trans leader can be “dangerous.”

And Rohrer hopes, like everything else they’ve done in ministry, the work as bishop will point people back to Jesus.

“If there are people who are curious about why or how the Lutherans could elect a transgender person as our bishop, I deeply hope that curiosity they have will inspire them to notice all the wonderful ways God sometimes is able to do more than we noticed, with more people than we thought possible and in more places than we imagined.”