[Episcopal News Service] Presiding Bishop Michael Curry strongly denounced the riotous assault on the United States Capitol on Jan. 6 by supporters of President Donald Trump, referring to it as an “attempted coup.” At least one person was shot inside the Capitol when Trump supporters stormed past police into the building, entering the Senate chamber and leading police to deploy tear gas.

“The events at our Capitol today are deeply disturbing. We believe the actions of armed protesters represent a coup attempt,” Curry said on Facebook Live shortly after 3:15 p.m. “Today’s protesters pushed through police barricades and forced their way into congressional chambers and … [are] threatening the safety of lawmakers, their staff and others who work in the Capitol complex. This threatens the integrity of our democracy, the national security of our nation, the continuity of government, and the lives and safety of our legislators, their staffs, law enforcement and all who work in the Capitol.”

The attack took place as Congress was meeting to certify the votes of the Electoral College and confirm President-elect Joe Biden’s victory, which Trump and a Republican faction in Congress have sought to overturn on false grounds. It happened shortly after Trump held a rally at the White House in which he again falsely claimed to have won the election and asked Congress to overturn the results, after which his supporters marched to the Capitol.

“We are a democracy with longstanding institutional norms that must be honored,” Curry said in his brief address, “foremost among them following the processes laid out in the Constitution and federal statute to facilitate the peaceful and orderly transfer of power.”

Curry then asked viewers to join him as he prayed for the nation, using the prayers that accompany Morning Prayer in the Book of Common Prayer, including the Prayer for Peace, which is addressed to “Eternal God, in whose perfect kingdom no sword is drawn but the sword of righteousness, no strength known but the strength of love.”

“Even as our nation’s Capitol is being endangered and assaulted, we pray that the Lord Jesus Christ, we pray that God in his way of love, might prevail in all of our hearts,” Curry said.

The staff of the church’s Office of Government Relations, which is housed in the United Methodist Building directly across the street from the Capitol, is working remotely, according to Director Rebecca Linder Blachly.

“We condemn violence in all its forms and the effort to overturn the will of the people and the peaceful transition of power,” Blachly told ENS in an email. “We must all commit to engaging our government in the ways our constitution allows us to – through petitioning the government, through advocacy and through our public witness that emerges from our faith in Christ Jesus and that demands we push for policies that help the least of these.” 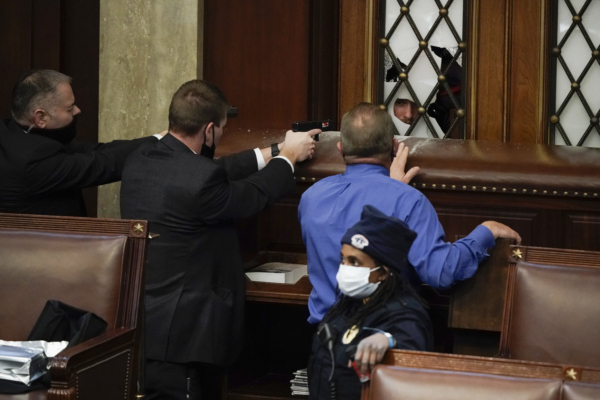 Police with guns drawn watch as terrorists try to break into the House chamber at the U.S. Capitol on Jan. 6, 2021, in Washington, D.C. Photo: J. Scott Applewhite/AP

The mob that stormed the Capitol clashed with officers outside on the steps and inside the halls of the U.S. government’s legislative branch, forcing a halt to the certification proceedings at about 2:15 p.m.

Vice President Mike Pence, who had been presiding over the certification, was rushed from the Senate chambers, and lawmakers retreated to safety as the Capitol was evacuated and placed on lockdown, according to reporters on the scene.

A swarm of pro-Trump demonstrators moved through the halls, and some entered the Senate chamber. In photos and video posted to social media, they could be seen and heard shouting, posing for photos, hanging from walls and even stealing a lectern before being pushed back. Some photos also showed security personnel pointing guns at demonstrators who were looking inside the Capitol through broken windows.

By evening, authorities had cleared the rioters from the Capitol, partly with the help of the D.C. National Guard, activated by the Army. Congress reconvened and certified Biden’s election.

Earlier in the day, thousands of pro-Trump demonstrators amassed on the National Mall for a speech by Trump, in which he repeated some of the false claims about his election loss that have fueled his supporters’ anger and some Republicans’ attempts to overturn a free and fair election.

Despite Biden’s winning a clear majority of both the electoral vote and popular vote, Trump has refused to concede and has continued for two months to make baseless assertions that Biden’s victory stemmed from election fraud.

“We will never concede,” Trump said again on Jan. 6. No evidence has surfaced of widespread fraud or election irregularities that would cast doubt on Biden’s victory, and even an agency within Trump’s own administration has called the election “the most secure in American history.”

Nevertheless, Trump called the election “corrupt” in his remarks to the protesters in Washington.

“I know that everyone here will soon be marching over to the Capitol building to peacefully and patriotically make your voices heard today,” Trump told them. “We’re going to try and give our Republicans, the weak ones, because the strong ones don’t need any of our help, we’re going to try and give them the kind of pride and boldness that they need to take back our country.”

Within hours, his supporters had formed a riotous mob outside the Capitol and stormed the building.

Washington Bishop Mariann Budde and the Very Rev. Randy Hollerith, dean of Washington National Cathedral, addressed the nation via Facebook Live on Jan. 6 rebuking the president, defending the separation of church and state and calling for the insurrectionists who stormed the Capitol to end their violent occupation of the legislature.

“Our process is democratic, yes, but it is also built on some fundamental principles: we care for our neighbors as ourselves. We accept outcomes we may not like. We live to struggle another day. We are gracious in victory and magnanimous in defeat,” Budde said. “But that is not what we are seeing today. The demonstrations here in Washington want to take those foundational principles – principles that have undergirded this nation for nearly 250 years – and toss them out. They do not respect our laws. The protestors do not respect our social contract. They do not respect our safety. And they bring dishonor to themselves and on those they claim to support. This. Must. End.”

“Though strained and rent asunder, that process has worked. And we must continue to allow it to work until it reaches its necessary conclusion,” he said.

Budde and Hollerith also offered words of thanks to law enforcement and offered prayers for the residents of the District of Columbia and for the nation.

Bishops Alan M. Gates and Gayle E. Harris of the Diocese of Massachusetts were to hold a prayer service at the Cathedral Church of St. Paul in Boston.

New Jersey Bishop William H. Stokes planned to offer an extended Compline service of prayer for the nation, for peace and for country-wide unity. Diocese of California Bishop Marc Andrus planned to host an online prayer vigil on Facebook.

“Watching the chaos erupting at the U.S. Capitol we may find our spirits being quelled. Do not be overcome; these are both the death throes of what has been, and the birth pangs of what is struggling to be born. Our democracy will hold, the Beloved Community is being healed, despite the appearance now,” Andrus said.

In Pittsburgh, the Rt. Rev. Dorsey W. M. McConnell called for prayer: “Please pray that the country may go in a different direction. Pray now for the safety of our members of Congress and our senators, for the Capitol Police themselves, and pray especially for these rioters, that God will turn their hearts, that they may abandon this folly and pursue, instead, the way of peace,” he said.

San Diego Bishop Susan Brown Snook wrote to her diocese as the Capitol was under siege and offered prayers from the Book of Common Prayer for personal use as she urged Episcopalians to pray and strive for justice and peace.

“I call on all Episcopalians in our diocese to enter into a deep practice of prayer for our country and for the peaceful transfer of power over the next two weeks. Let this season of Epiphany be a time for us to consider our own calls to peace and justice, and to pray for the Holy Spirit to bring resolution to our conflicts and healing to our divided nation,” wrote Snook.

Pennsylvania Bishop Daniel G.P. Gutiérrez offered a prayer for the country from his Philadelphia-based diocese.

“From Philadelphia, our nation’s birthplace, to witness this behavior in our nation’s capital is deeply troubling. No, it is an assault on our country and her citizens. Prior to ordination, I spent a career in government and politics. I come from a family who served in all levels of government as elected officials. I can say from experience, that there were elections that were lost that were personal and painful. However, we accepted the will of the people. I accepted them because of the deep love I have for this country and our common principles,” he wrote.

Oklahoma Bishop Poulson Reed addressed his diocese: “Today is the Feast of the Epiphany, on which we celebrate the magi bringing their gifts to the Christ child, the Prince of Peace, following the star. As we watch the shocking events unfolding at the US Capitol, we pray for peace in our nation, for wise and just leadership, for lawful order, and for safety for those in harm’s way. As people of faith, we can and must follow God’s light, and be instruments of God’s peace,” he wrote.