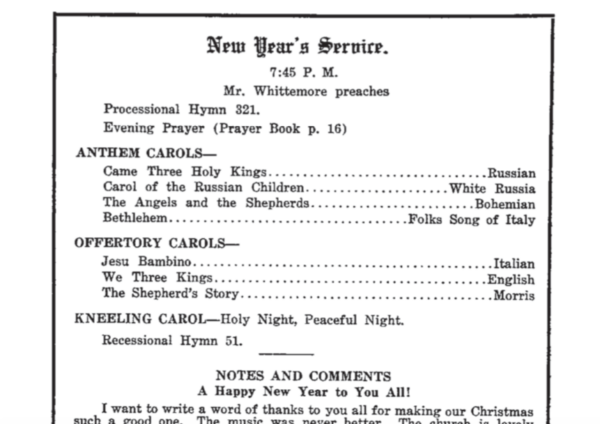 A section of the January 2, 1921, bulletin of Calvary Episcopal Church, Pittsburgh. The service was the first-ever to be broadcast on the brand new medium of radio.

[Episcopal Diocese of Pittsburgh] It was the first Sunday in 1921. While Pittsburgh’s Calvary Episcopal Church started its day in typical fashion with Holy Communion and Morning Prayer, it would later hold an evening service unlike anything that had ever taken place before.

“An interesting arrangement has been made for tonight’s service,” Calvary’s then rector, the Rev. Edwin Jan van Etten, wrote in the parish bulletin. He noted that the International Radio Company (part of Westinghouse Electric) had installed wireless equipment in the church, and that the hymns and sermon to be preached by his associate, the Rev. Lewis Bliss Whittemore, would be “flashed for a radius of more than a thousand miles through space!”

Thus, Calvary came to host and officiate the first religious service ever broadcast to the world.

Westinghouse’s KDKA radio station had just become the first in the country to begin broadcasting a mere two months earlier. And it had never originated a program outside of its own studios until that night at Calvary.

Calvary’s weekly presence on KDKA would last for more than 40 years. The station’s “clear-channel” license allowed it to broadcast at 50,000 watts on a frequency that was not shared with any other station. That meant its programs could be heard in much of the eastern and central United States, and if atmospheric conditions were right, well beyond.

Calvary’s national prominence grew, as did the profiles of its clergy. Whittemore would later become Bishop of Western Michigan. Van Etten headed to Boston to serve as dean of the cathedral. He was succeeded by the Rev. Arthur Kinsolving, himself a former dean and future bishop. Calvary would attract rectors from the likes of the Rev. Sam Shoemaker, who helped established Alcoholics Anonymous, and in more recent times, the Rev. Dr. Harold T. Lewis. The current rector, the Rev. Jonathon W. Jensen, was the dean of Trinity Cathedral in Little Rock.

On Sunday, Jan. 3, 2021 – exactly one hundred years plus one day after that groundbreaking Evening Prayer – Calvary commemorated its role in broadcast history. The 11 a.m. Eucharist featured the music played during its 1921 inaugural broadcast and Jensen preached about the anniversary.

Just as it did a century ago, Calvary’s service went out to the entire world, although this time using the modern technology of live streaming over the Internet. Calvary has been streaming its services and parish life regularly since the onset of the Covid pandemic, and the church is now permanently equipped with five video cameras that are fully integrated with the audio system.

The Jan. 3 commemoration can be accessed through the parish website at www.calvarypgh.org/live or on its Facebook page www.facebook.com/CalvaryEpiscopalChurch.