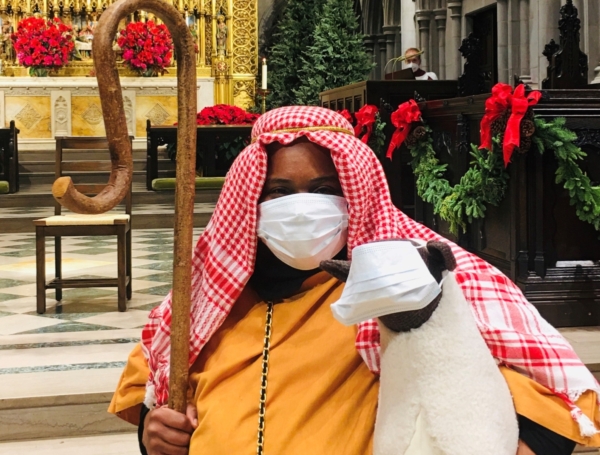 [Episcopal News Service] For many Episcopalians, it just wouldn’t be Christmastime without the familiar festivities of lessons and carols, nativity scenes and pageants. Behind the scenes, lay leaders, volunteers and church employees are often the ones who make the magic happen. And this year, across The Episcopal Church, they are stepping up to the challenge with ingenuity, finding ways to keep the Christmas spirit alive while keeping their parishioners safe.

“The amazing thing that I’ve seen is the creativity behind it,” said the Rev. Shannon Kelly, director of the church’s Department of Faith Formation and officer for young adult and campus ministries.

The main challenge this year is to transpose the traditional Advent and Christmas activities into COVID-safe contexts – mostly through video and Zoom.

“I would say 90% of the people that I’ve talked to that are children’s ministers, youth ministers … have become, for whatever reason, the default film crew,” Kelly told Episcopal News Service, “because they do that kind of work already. They’ve already done videos and stuff like that if they do camp or vacation Bible school or whatever, and so they have that skill set.”

Lay ministers are finding plenty of different ways to stage much-anticipated Christmas pageants virtually this year. Some, like the staff and clergy of St. James’ Church in New York City, are playing the parts themselves this year in prerecorded videos. Many parishes, though, are having the children record their own parts individually. The lay ministry team at St. Paul’s Episcopal Church in Fayetteville, Arkansas, led by Samantha Clare, is putting together a sock puppet pageant that will be filmed in church one child at a time.

“We’ve adapted our script so that it can be shot with one kid at a time in the frame – well, at least their hand,” Clare told ENS. “We put together sock puppet kits so each kid will pick up their character’s kit and design their own puppet. Then they’ll come to the church for a filming session.

“We will have to do quite a bit of video editing to get it all together, so … it is more work. But we think it’s worth it to put in the extra effort, especially in order to make it extra silly and fun this year. Our goal is to tell the traditional story in a way that will deliver the most joy possible,” she said.

With the United States entering the worst phase of the COVID-19 pandemic, the festive atmosphere that usually offsets the stress of planning church events for Advent and Christmas is harder to find. As the coronavirus takes its physical toll, stress and fatigue are taking an emotional one. Some dioceses are taking on seasonal tasks to ease the burden on parish staff, producing videos that all parishes can use and enjoy – because, as Kelly noted, “everyone’s exhausted.”

Greg Tuttle, director of youth ministries at St. Dunstan’s Episcopal Church in San Diego, California, and Charlette Preslar, the Diocese of San Diego’s youth missioner, are assembling both a Christmas pageant and an Epiphany pageant featuring young people and musicians from various parishes. But they’re also soliciting contributions from people across the diocese to play the chorus of sheep and angels. Sheep, wearing fleece, should record a brief video clip in which they “offer their best ‘baaaaaa’” and angels, wearing halos, “a lovely ‘ahhhhh.’”

Of course, many parishes rely on lay volunteers instead of, or in addition to, paid staff. At St. Philip the Apostle Episcopal Church in Scotts Valley, California, vestry member and volunteer webmaster Nathaniel O’Brien has “done triple-time this year because everything Advent is going online,” said the Rev. Katherine Doar, priest-in-charge, “and everyone in the congregation from every traditional Advent event or ministry has called upon him to help them get their thing into the electronic sphere.” That includes filming an Advent wreath-making presentation, creating a webpage for a digital Advent calendar featuring submitted photos, setting up a holiday trivia night on Zoom, and shifting the annual No Room at the Inn homelessness fundraiser to an online format.

O’Brien, a 30-year-old lifelong member of the congregation, is used to helping out around Christmas; as a newborn, he played baby Jesus in the pageant.

“We could not make it through this Advent without him,” Doar said.

“I see my role as implementing ideas of our much more creative people in the congregation to provide a 21st-century connection to a very traditional season of Advent and Christmas,” O’Brien told ENS. “To work on these efforts is a joy and [has] provided a sense of hope and joy in a world where there is little of it.”

Then there are the music directors tackling the complex task of converting the familiar lessons and carols service to a digital format, like Jonathan Giblin, director of music ministries at St. Paul’s Episcopal Church in Peoria, Illinois. Giblin is putting together a virtual lessons and carols service for Christmas Eve, but not all the singers have the equipment or technical skills to record themselves at home, so he converted the church’s choir room into a recording studio where singers could come and record their parts safely.

At Sewanee: The University of the South, where the lessons and carols service is a treasured Advent tradition, alumnus and filmmaker Stephen L. Garrett directed a 40-minute recorded version, with masked and distanced singers and musicians.

“We have a lot going on! Phew!” Steinhardt said. “I’m grateful for our amazing secretary, team, and all the wonderful volunteers that help keep things going.” 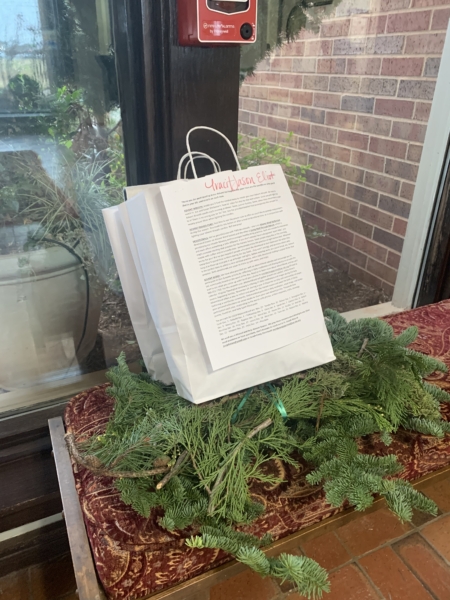 Las Posadas is a Mexican tradition commemorating the journey that Joseph and Mary made from Nazareth to Bethlehem. Some churches in mainly Latino communities, like Christ Church Cathedral in Houston, Texas, usually celebrate it by gathering at a different parishioner’s home over the course of a week or so. Since COVID-19 has made that impossible this year, members of the cathedral’s Latino congregation will gather on Zoom for prayers and song – all coordinated by lay leaders including Marcia Quintanilla and Sylvia Castellanos.

And the work isn’t just logistical – it’s pastoral. This year, with the suffering brought on by the pandemic, Christmas will be a dark time for many. Lay leaders have to find a balance between celebrating the holiday and acknowledging the pain.

“While they’re doing all this creative work, they’re also themselves [grieving] and helping other people grieve what’s not going to be. And so there’s that real tension that I think the lay leaders especially right now are feeling,” Kelly said. “Not that the clergy aren’t, but I think they’re just especially feeling it.”

Lay leaders also may not have access to the same kind of support systems that clergy do, Kelly said. She and her colleague Bronwyn Skov, officer for youth ministry, have been working with lay leaders to make sure they are connected to each other and the wider church. Kelly and Skov have been spending “some of our time just doing pastoral care for folks both on the diocesan level and congregational level because lay folks, lay professionals especially, don’t have a built-in network,” Kelly said.

“When I went to seminary, I made friends; those are the people I still talk to when things are tough, but they don’t have that necessarily,” she told ENS. “So what we have found is inviting people to places online to share or at least know that you’re not crazy that you’re feeling a certain way or know that other people are struggling with it.”

Through group email lists and Facebook groups, those leaders get “not only a resource sharing of ‘How are you doing this next thing virtually?’ but also just support and encouragement for each other.”

“But I will say that children’s ministers, youth ministers [and other lay leaders] are scrappy people, and so they make do with what they have … in whatever creative way they can.”