[Episcopal News Service] The pressure of leading a small parish through the pandemic had been weighing on the Rev. Paige Hanks for months. She juggled a growing list of responsibilities, from producing online videos to improving the parish’s website and email communications to calling parishioners, some of whom she hadn’t seen in person since March. She sometimes logged 70-hour weeks as the part-time priest-in-charge at St. Bede’s Episcopal Church in St. Petersburg, Florida. Exhaustion was setting in.

“It felt very much like it was becoming a burden rather than a joy to serve,” Hanks told Episcopal News Service. By September, the burden had become nearly unbearable. “There was a day that I knew,” she said. “It was absolutely clear that it was time to go. And so, I called the senior warden that day.”

In an Oct. 20 post on Twitter, Hanks shared the news that she had resigned, leaving the congregation in the hands of lay leaders: “It’s wild how much pent up emotion I have inside of me that I have perhaps suppressed – it feels like a giant exhale after holding my breath. Ready to focus on where God is calling me next.”

I resigned as Priest in Charge. It's wild how much pent up emotion I have inside of me that I have perhaps suppressed – it feels like a giant exhale after holding my breath. Ready to focus on where God is calling me next. Grateful for this Twitter community of faithful folks.

COVID-19 wasn’t the only factor in her decision, she told ENS, but it was central. “Had there not been a pandemic, I would probably still be there.”

Across The Episcopal Church, the sweeping disruptions to parish life wrought by the coronavirus pandemic have taken a toll on parish priests like Hanks, the church’s front-line responders. They already are in their ninth month of “Coronatide” parish ministry, and the latest surge in COVID-19 cases underscores that the health crisis isn’t going away soon. Vaccine trials have produced promising results, though health officials say approved vaccinations likely won’t be widely available before spring or summer 2021.

Priests interviewed by ENS spoke of prolonged stress and fatigue this year. They have had to upend worship routines, limit or eliminate sharing of Communion, reimagine public ministries, worry over parish finances and innovate in unexpected ways, often while developing new technological skills. 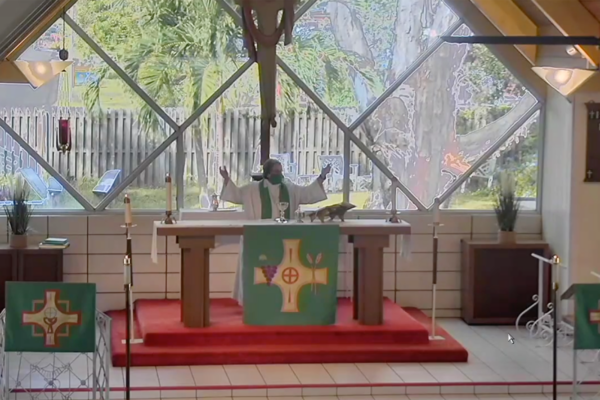 The Rev. Paige Hanks leads an online worship service in October before stepping down as priest-in-charge at St. Bede’s Episcopal Church in St. Petersburg, Florida.

“There’s such a fatigue out there from doing these things these new ways,” said the Rev. Mike Dangelo, rector of the Church of the Redeemer in the Boston suburb of Chestnut Hill, Massachusetts. He told ENS that the strain on priests is exacerbated by continued uncertainty about the pandemic’s duration.

“I think people are just settling into the idea that we’re going to be doing this for another year maybe,” Dangelo said.

Episcopal leaders at the churchwide level also are discussing ways they can support clergy who are struggling during the pandemic. It was a topic at the October meeting of Executive Council and continues to be part of church staff members’ discussions of pandemic response. Support is especially critical for the many priests who have started new congregations and ministries in recent years.

“That is a very risky and vulnerable place to be, even in the best of times,” said the Rev. Tom Brackett, The Episcopal Church’s manager for church planting and mission development. He said in an interview with ENS that the additional strains the pandemic is placing on those priests, including financial uncertainty, could undercut the church’s investment in church-planting infrastructure over the past decade.

“We could very easily see all of that disappear very quickly in the next six months because of the amount of clergy that have to go out and seek work,” he said, so he and other church leaders are considering how best to ensure the continued vitality of those ministries.

The strain goes beyond the increased demands on the priests’ time and labor. Parish priests also have agonized over the distance the pandemic has placed between them and many of their parishioners – including some who have died.

“You don’t realize how exhausted you’re becoming – until you do,” the Rev. Kevin Morris told ENS. He is rector of the Church of the Ascension in Rockville Centre, New York, in the Diocese of Long Island. “I’m only now beginning to process and deal with how utterly exhausted I am from earlier in the year.”

In May, religion blogger and Church of Christ minister the Rev. John Dobbs warned, in a post shared widely in clergy circles, of “the coming pastoral crash.” “The impact of the world response to COVID-19 will be felt for many years to come,” Dobbs wrote. “From my perspective, those who serve in ministry are, in my thinking, in particular danger for several reasons.”

Among Dobbs’ reasons: Pastors are serving in new ways without the benefit of training or experience. They tend to set unrealistic expectations for themselves. Their congregations are financially vulnerable. They worry about the future of ongoing ministries. They work seven days a week and don’t take time off. They aren’t tending to their own physical or mental health. They are exhausted.

Their best response, Dobbs said, is to “commit to ministering to their own hearts first” and then show support for other ministers as well.

Early in the pandemic, much of the guidance offered to congregations by The Episcopal Church and its dioceses focused on the logistics of parish life, especially how to worship while following public health precautions intended to slow the spread the virus. Now, as the pandemic is in its ninth month, church leaders also have begun responding to the warnings of Dobbs and others that the new demands placed on priests may not be sustainable without greater institutional support, especially for priests serving struggling congregations.

The Diocese of Pennsylvania promoted a workshop in July intended to help clergy deal with stress. The Diocese of Texas shared an online list of resources for spiritual caregivers that referenced Dobbs’ blog post. And last month, several Episcopal bishops joined an ecumenical group of New England faith leaders in signing a joint letter warning of “decision fatigue and exhaustion” among clergy and lay leaders. They offered support for those at risk of anxiety, depression and addiction in a year “soaked in suffering.”

The two Episcopal dioceses in New Jersey teamed up this fall to create a “Warm Line” for clergy to call and speak to a licensed counselor. And in the Diocese of Louisiana, priests are invited to join a diocesan check-in conference call every week or two.

“The clergy in this diocese have just done a phenomenal job,” said the Rev. Shannon Manning, Louisiana’s canon to the ordinary. At the same time, “there’s just an underlying exhaustion.”

Hanks’ pre-pandemic experience at St. Bede’s had inspired hope. A former elementary school principal, she was ordained as a priest in January 2019 and four months later accepted the priest-in-charge role at St. Bede’s through a new partnership with the Diocese of Southwest Florida and St. Petersburg’s Cathedral Church of St. Peter. Hanks also was named canon missioner at the cathedral, where she remains on staff. 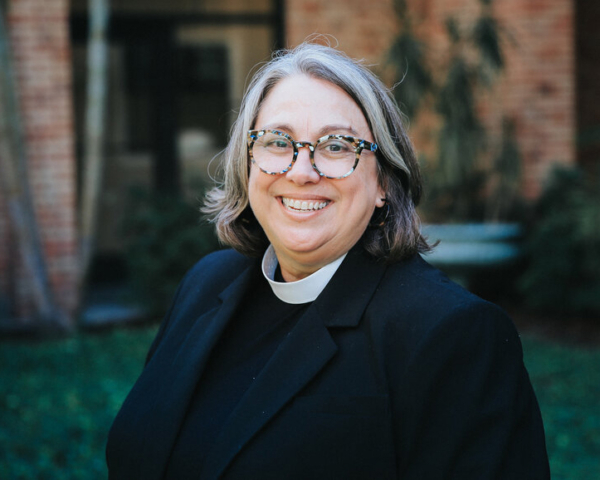 By splitting her time between the two congregations, Hanks provided St. Bede’s with its first permanent priest in several years. The early results were impressive. The worshipping congregation grew from barely 30 on an average Sunday to more than 50 in less than a year under Hanks’ leadership. Pledges also increased in number and amount, and Hanks saw another positive sign in the requests for baptisms and confirmations.

“We were trending in all the right directions,” she said. “And then the pandemic hit.”

Hanks spent the first six weeks of the pandemic working from home to streamline communication with her congregation. She began producing weekly videos of worship services to post online and had livestream technology installed in the church, while during the spring and summer, she and lay leaders debated how and when to resume in-person worship. The congregation also created a food pantry.

Hanks made regular phone calls to parishioners, but those calls “took every bit of life out of me,” she said. They were a reminder of the distance the pandemic had injected between her and the parishioners she had quickly grown to love.

Hanks, like other parish priests, had been spurred to action by the novelty of pandemic response, but “somewhere in June or July, it just kind of stopped feeling like this was special and started feeling like, oh my gosh, this is really how it’s going to be? That was hard.”

Parish priests have faced a constant need to provide pastoral care during the pandemic. In Nashville, Tennessee, the Rev. Brian McVey of Church of the Advent is also on the receiving end: He began seeing a counselor before the pandemic “to keep me centered,” and those conversations, now over Zoom, have helped him deal with the stress of this year. “I have to be a non-anxious presence with the congregation, but I can be an anxious presence with her,” he said of his counselor. 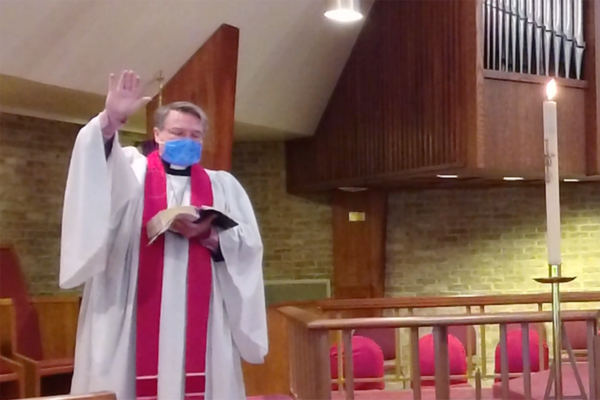 As rector of a modest-sized congregation, with pre-pandemic Sunday attendance around 100, he sometimes wonders how long he can keep working 70- or 80-hour weeks, but so much needs to get done. “You kind of push through and hope that, down the road, I’ll get a vacation.”

A sense of purpose and mission is what energizes Dangelo, the Massachusetts priest, as he ministers to parishioners during these tough times. Early in the pandemic, he drove his pick-up truck around town and parked it in front of parishioners’ homes so he could conduct outdoor pastoral visits while sitting in the truck’s bed. Pastoral care is “the single most critical component of what we’re doing right now,” Dangelo said, and he continues to conduct socially distant pastoral visits several times a week.

“I think this is a great time to try things,” he said. “It’s a real opportunity for creative ministry.”

Morris, the Long Island priest, said his outlook improved after the Church of the Ascension implemented public health precautions that allowed for in-person worship services in July. And he tries not to lose sight of what he sees as his humble role as a parish leader.

“I have to remind myself, the world already has a savior and I’m not it,” he said. 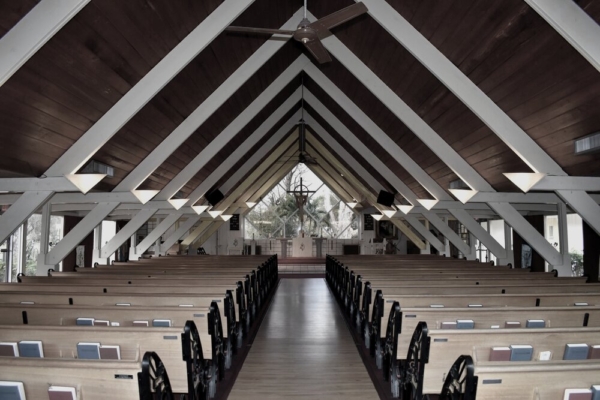 Some days at St. Bede’s, Hanks felt a long-term commitment to serving the parish. Other days, she wasn’t sure how long she could keep going. “Trying to hold this place together” had become her full-time role, the role of chief “hole-plugger,” and that wasn’t how she saw herself best serving her parishioners.

“My level of energy for the work and their desire for things to just be maintained were not matching up,” she said. “It just kind of felt like it was all unraveling.”

Hanks and lay leaders had established plans for getting the parish through the pandemic, and her workload had eased since the busy early days. She still concluded it was time for her to move on. The church’s wardens and Southwest Florida Bishop Dabney Smith were disappointed but supportive. She told ENS that she is proud of her former congregation, for its willingness to engage in self-reflection and its recent growth.

She also remains optimistic that living through the pandemic will show The Episcopal Church new paths forward.

“Perhaps you have to have death before you have resurrection,” Hanks said. “The church is counting on people, Christians, who feel compelled by the Gospel to continue to share the good news with as many people as they can.”