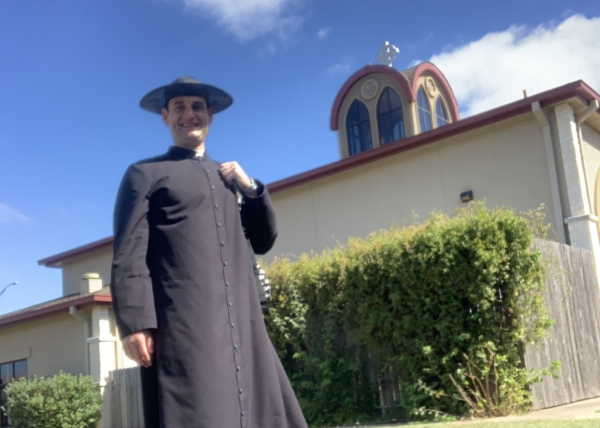 [Episcopal News Service] On a mild but windy morning in Austin, Texas, the weather prompted no complaints from the Rev. David Peters, who was “ambling along” west of downtown. But gusts of up to 30 mph were making it difficult for the priest to describe his 70-mile prayer walk to the reporter who had reached him by phone.

“Let me get to a little quieter spot here,” Peters told Episcopal News Service. He hung up, ducked into a Whole Foods supermarket and called back. Audio clarity was established. Taking a break from his travels, Peters explained why he is spending several days on foot honoring the Rev. Malcolm Riker, the legendary Diocese of Texas church planter.

Riker, who died in 2002, is renowned locally for establishing eight new churches in the Austin area starting in the late 1950s. His admirers attribute that success partly to his seemingly boundless energy and stubborn determination. He also had a good sense for timing and location, Peters said, in an era when Austin was starting to boom.

“The way Malcolm planted a lot of churches, he would get 20 people together from other churches that lived in a certain area, and then they would just buy land,” Peters said. “He had a pretty good sense for where the neighborhoods were about to be built.”

Here’s Malcom the year before he moved to Austin to plant churches. #malcolmswalk pic.twitter.com/8wKf63v7NI

Peters’ admiration also derives from his own experience as a church planter. He leads the congregation of St. Joan of Arc, which meets at a wine and beer bar called the Three Legged Goat in Pflugerville, about 10 miles north of Austin. The coronavirus pandemic this year initially forced Peters to suspend in-person gatherings, but the congregation has since resumed Sunday worship services on the bar’s outdoor patio. Peters also leads daily worship services online through Zoom.

On Oct. 29, he had just finished leading Morning Prayer from the road when ENS caught up with him. It was Day 2 of his prayer walk, and he was on his way from St. Mark’s to St. John’s Episcopal Church. Those church’s biblical names were no accident, Peters said. Riker’s church planting started with the Gospels.

“Matthew, Mark, Luke and John,” he said. “Those were his first four churches.”

Peters had another, more personal reason to set out this week on a long prayer walk. He is a long-distance runner who completed the 2020 Austin Marathon in February while wearing a floor-length cassock – “I’ll never do that again, probably,” he told ENS – and in May, he completed a marathon distance again by looping his house over and over. On Oct. 30, he turns 45, and for previous birthdays, his goal was to run as many miles as his age. The pandemic, however, has disrupted his training, so running 45 miles wasn’t realistic.

Instead, he chose to walk to each of Riker’s eight churches, starting in the afternoon Oct. 28 at St. Alban’s Episcopal Church on Austin’s far south side. On the first day, he traced a route of about 10 miles to St. Christopher’s Episcopal Church. Then, he stopped and caught an Uber home for the night. “I’m not roughing it at all,” he said.

Peters was up before sunrise the next morning to resume walking. He plans to complete the journey in segments, either on his birthday or on Oct. 31, with a final stop at St. Richard’s in Round Rock, north of Austin.

Ending day 2 at St. John’s—founded in 1960. Each small volunteered to build an altar and communion rail. Malcolm ran all four gospel congregations at once for several years. He drove 104 miles every Sunday. #malcolmswalk pic.twitter.com/SibJbc03B9

Peters navigates the city’s sidewalks and paths while wearing his cassock. Clipped to the robe is a blinking light, for safety. He tops himself with a Roman hat, or a “saturno,” a circular-brimmed clergy hat. His pack doesn’t contain much more than some water and a battery charger for his phone, a necessity for this prolific Twitter user. “I’m doing a lot of posting, and GPS drains batteries real fast,” he said. For food, he stops at eateries along the way.

Peters also is using the pilgrimage to call attention to the Diocese of Texas’ three newest church plants.

Huge moon for the start of
Day 2 of #MalcolmsWalk. I’m raising $ for church planting in central Texas—consider donating:https://t.co/yFGdkQomBehttps://t.co/hwggcoUKPP

A new congregation doesn’t establish lasting roots overnight, he said. “I’m hoping this prayer walk pilgrimage will help me, and hopefully others, see that this is a long journey,” he said. “It was a long journey for Malcolm.” Riker spent years getting his churches off the ground, though in some ways, the church planter’s true role is that of the cheerleader, Peters said. To find success, “it’s real people showing up, sharing the vision and working hard, inviting people who don’t go to church.”

Riker, an Austin native, was something of an “enigma” who approached the priesthood like a military commander, Peters said. During World War II, Riker enlisted in the Navy and saw combat in the South Pacific. As a priest, he was known as a traditionalist who opposed fundamentalism but also opposed women’s ordination, and he insisted on following Rite I in the 1979 Book of Common Prayer. “He was definitely a very stubborn and determined leader,” Peters said, and that personality sometimes turned people off. Even Riker’s family obituary alluded to his “egocentric” reputation.

“It’s a similar problem to most startups. There’s the determination that people have to keep going. Hopefully in church planting, it’s fueled by the Holy Spirit. … But I think the Holy Spirit works with our personality to say, ‘I’m not going to quit,’” Peters said. At the same time, he doesn’t see Riker as the norm. “Most church planters are not big, bombastic figures. They just love people and love God.”

The pandemic has been particularly challenging for priests like Peters who are growing new congregations that aren’t based at traditional worship spaces. “Most of my job was mingling, showing up, getting to know people,” he said. “That’s something that’s not impossible right now, but it sort of has to be rethought and redone. … God’s calling people, even in pandemics, to a life of community.”