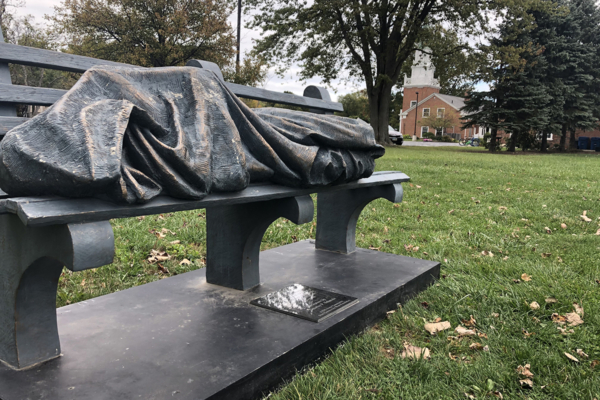 The sculpture “Homeless Jesus” has been installed on the property of St. Barnabas Episcopal Church in Bay Village, Ohio, since Oct. 12 and will be there through Dec. 1. Photo: Alex Martin

[Episcopal News Service] St. Barnabas Episcopal Church in Bay Village, Ohio, a western suburb of Cleveland, welcomed the opportunity to display a sculpture known as “Homeless Jesus” on its property for seven weeks this fall because the congregation thought it would spark conversations about how society treats and cares for the marginalized.

On Oct. 12, minutes after the sculpture was installed facing a city park’s well-traveled pathway, the Rev. Alex Martin received a visit from a police officer inquiring about the sculpture: Authorities had received a call alerting them that someone was sleeping on a bench – mistaking the sculpture for a real person.

“Bay Village is a small, tight-knit community where people genuinely care about each other,” Martin said in an interview with Episcopal News Service. “I have every reason to believe that the call was made out of genuine concern and compassion.”

The officer simply inspected the sculpture and its plaque and then chatted with Martin about it, but since then, the story has been picked up by news outlets in the Cleveland area and beyond, including Vice News and CNN. Much of the coverage so far has focused on the decision to call police, but Martin said the purpose of the sculpture is a broader one.

“The goal of the statue, the sculpture there, is to not only raise awareness about homelessness and extreme poverty but also to remind us that we are all created in God’s image and we have a Christian obligation to stand with the outcast and marginalized,” said Martin, who has served St. Barnabas as priest-in-charge for two years.

It’s not all surprising that someone mistook “Homeless Jesus” for a real person. The sculpture is deceptively realistic. Its subject is depicted lying on a bench and wrapped in a blanket, with only his bare feet poking out. His identity is revealed by his wounds, from the spikes used to affix Jesus to the cross.

The original sculpture was created by Canadian artist Timothy Schmalz, who is Roman Catholic, as a representation of Matthew 25:40: “Truly I tell you, just as you did it to one of the least of these who are members of my family, you did it to me.”

St. Barnabas was offered a version of the sculpture to display through Dec. 1 by Community West Foundation, which is loaning it to various churches in the area.

Community West Foundation is the largest provider of services to people suffering from homelessness in Cuyahoga County, which encompasses both Bay Village and Cleveland. St. Barnabas also has an ongoing partnership with St. Luke’s Episcopal Church in Cleveland to support its ministries serving people living on the streets or struggling with poverty.

After his initial tweet about “Homeless Jesus” was retweeted more than 28,000 times, Martin followed up this week with a message inviting community members to donate money to a fund that St. Barnabas will use to support the work of both Community West Foundation and St. Luke’s. As of Oct. 16, that campaign had raised about $1,000, with most of the donations totaling $5 to $15.

If anyone wants to help, please use this link to give. Select "Homeless Jesus" and every penny raised will be used to feed, clothe, and house those in need. Hopefully some good will come from all this. Thank you. https://t.co/Llhzw4n9oQ

“The sculpture speaks to people, and it draws strong reactions,” Martin told ENS.

That hasn’t just been the case at St. Barnabas. Schmalz’s various renditions of “Homeless Jesus” have the power to turn heads, and perhaps open minds, wherever they are installed.

In 2014, St. Alban’s Episcopal Church in Davidson, North Carolina, hosted one of the sculptures, provoking a mix of reactions, including at least one call to police. Another neighbor wrote a letter to the editor of a local news website saying the sculpture “creeps him out,” according to an NPR report.

St. Paul’s Episcopal Cathedral in Buffalo, New York, purchased a version of the sculpture for $33,000 and installed it in a downtown park in 2015, sparking a local controversy.

“There are some who are totally opposed to it. One particular person said ‘Jesus is not homeless,’” lay leader Michael Bonilla told a local public radio station at the time. “If you read the Scripture, Jesus did not have a home.”

The effect is particularly poignant in more affluent cities and neighborhoods where residents don’t often come face to face with the problem of homelessness, as is the case for St. Barnabas’ “Homeless Jesus.”

“In a neighborhood like this, it’s jarring to see someone sleeping on the bench, and it’s forcing us to have conversations that we might not otherwise have,” Martin said. And if it makes people uncomfortable, “homelessness ought to make us uncomfortable.”