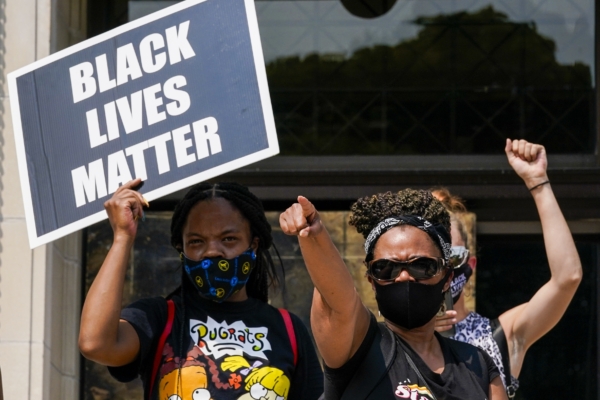 A small group of Black Lives Matter protesters hold a rally on the steps of the Kenosha County Courthouse in Kenosha, Wisconsin, on Aug. 24, 2020, after Kenosha police shot Jacob Blake in the back the evening before. Photo: Morry Gash/AP

[Episcopal News Service] In the aftermath of another shooting of an African American by police, church leaders in Wisconsin are expressing grief and outrage, but not surprise. Almost three months earlier, protesters in Milwaukee and elsewhere had taken to the streets in response to the killing of George Floyd by police in Minneapolis, Minnesota. On the night of Aug. 23, protests and riots flared again in Kenosha, 40 miles south of Milwaukee, where earlier that evening police shot Jacob Blake in the back at close range.

Blake was taken to a hospital near Milwaukee in serious condition, but his father said he was out of surgery and in stable condition on the afternoon of the 24th, the Milwaukee Journal Sentinel reported.

In a statement, Milwaukee Bishop Steven Miller said he “share[s] in the outrage caused by this shooting and many like it.”

“We lament yet another shooting of an unarmed Black man, Jacob Blake, by law enforcement. One such shooting is one too many, and yet in our nation the numbers of such shootings continue. We join those who call for a complete and impartial investigation of this travesty,” Miller wrote.

According to the Kenosha News, witnesses said Blake had been trying to break up a fight between two women before police were called to the home, where the officers tried to use a Taser on Blake, who was unarmed, and then shot him about seven times, though those details have not yet been confirmed by authorities. A brief video of the shooting, which does not include the events that led up to it, shows Blake opening a car door and reaching inside as officers fire multiple shots into his back. The Blake family’s attorney said Blake’s three sons were in the car when he was shot. The officers involved have been placed on leave and an investigation is underway.

In downtown Kenosha, protests and riots followed the shooting overnight. Cars and buildings were damaged about a block away from St. Matthew’s Episcopal Church, which did not experience any vandalism.

“We are downtown; we’re kind of right in the middle of where a lot of the unrest happened,” St. Matthew’s rector, the Rev. Matthew Buterbaugh, told Episcopal News Service. “We don’t condone property damage, but we also have to recognize that property is not at the same scale of human life.”

By the morning of Aug. 24, the unrest had died down and Buterbaugh walked around downtown to see what had happened.

“It seems like there’s a lot of cleanup going on. People are boarding up. It looks like people are preparing for another night of activity,” Buterbaugh said.

Sirens could still be heard in the background of the church’s virtual Morning Prayer service, which seminarian Chris Warne dedicated to Blake.

Buterbaugh said he wasn’t surprised by the shooting because of the tenuous relationship between the police and the community. Still, he said, “they should have just known better. I mean, the police should always know better, to begin with.

“I can’t fathom how they didn’t see the writing on the wall and see that there would be a better way to de-escalate that situation.”

The shooting is the latest in a long string of police shootings of African Americans caught on camera, including the Aug. 15 killing of Anthony McClain in Pasadena, California.

On the 24th, Gov. Tony Evers called the Wisconsin Legislature into a special session to take up police reform bills and authorized the deployment of more than 125 members of the National Guard to Kenosha.

“It’ll be interesting to see, in the coming days, what some of the fallout will be. There’ll be continuing unrest. I wouldn’t be surprised if that is the case,” Buterbaugh said.

In his statement, Miller asked for prayers for Blake and his family and for the city of Kenosha, and also for action.

“We pray that our righteous anger will strengthen our common effort to combat the unholy trinity of racism, poverty and violence, and that the destruction of property in our communities will cease,” Miller wrote.