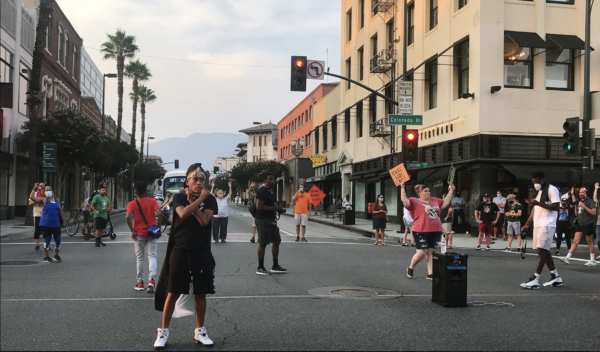 [Religion News Service — Pasadena, California] The Rev. Mike Kinman, rector at All Saints Episcopal Church, got the call just before midnight on Aug. 21.

It was his son letting him know police had blocked off streets near Pasadena City Hall and All Saints Church. Officers were standing in a line on the City Hall steps in riot gear and demanding that Black Lives Matter protesters leave the encampment they had set up.

Protesters have been holding demonstrations since police in Pasadena, just outside Los Angeles, on Aug. 15 shot and killed Anthony McClain, a 32-year-old Black man from Pasadena, according to the Pasadena Star-News. They’re demanding Pasadena police to not only release the names of the officers involved in McClain’s death but also to fire and prosecute them.

Kinman decided to join his son on the scene Thursday night, and by the time he got there, protesters had already moved to another nearby location. Police declared their gathering an unlawful assembly and demanded they disperse or be arrested, Kinman said. Kinman helped route protesters out of the area and into the parking lot of All Saints Church. Roadblocks made it difficult for protesters to get to their cars, Kinman said. 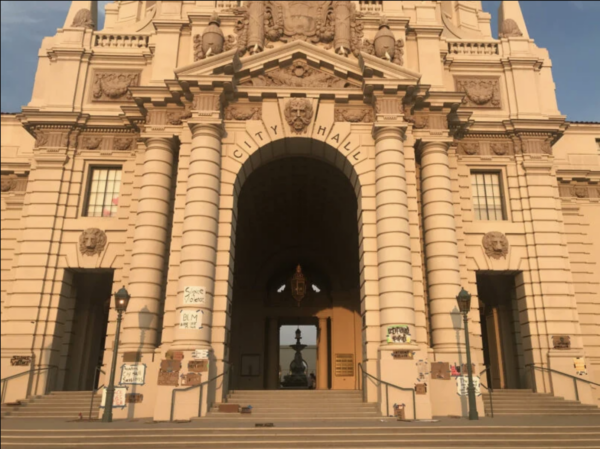 More than 10 protesters wound up spending the night at All Saints Church after a brief standoff with police ensued outside the church, Kinman said. In video footage, activist and Black Lives Matter leader Andre Henry is heard telling the officers: “Am I leading an armed rebellion that you guys come out in guns and shields?”

(Henry is a columnist for Religion News Service.)

Kinman said the doors of All Saints Church will remain open for protesters whenever they see themselves “in danger from the police.”

“This is the job of the church,” Kinman said. “If they’re not safe at City Hall, where are they safe? Well, you’re safe here.”

“There was no force used by officer(s) to disperse the group, and no arrests were made,” Grisafe said.

Protesters, however, describe an overwhelming scene that night.

Henry said that when they started to pack up again, “the police started to advance on us by making this loud grunt.”

The protesters set up their tents in the enclosed church grounds, next to about 20 people who are homeless and who also sleep on the church campus.

Some activists continued to gather at the church on Friday, debriefing and planning to protest at the nearby Old Town Pasadena shopping and restaurant district that evening.

Dozens of protesters wound up marching along Colorado Boulevard Friday evening, blocking intersections as diners ate outside restaurants. They chanted, “Black lives, they matter here!” and “Whose streets? Our streets!” and held signs declaring “Cop = Slave-Catcher.”

After the police killing, the community is lamenting and gathering peacefully, Kinman added.

Instead of sending therapists and social workers, he said, “we send police with riot gear and guns.” 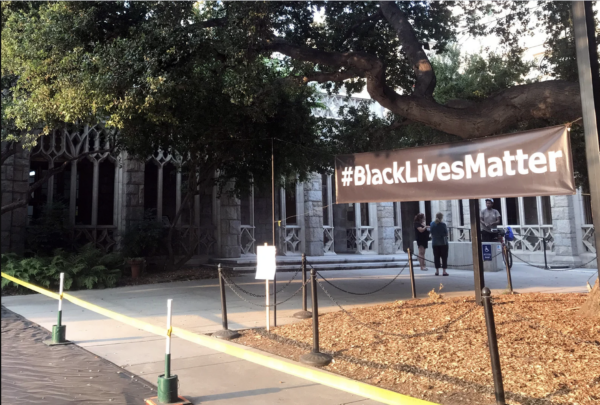 In a Facebook post, Kinman wrote that he is inspired by the protesters is thankful for All Saints Church.

“Grateful for the opportunity to put our values of radical inclusion, courageous justice, joyful spirituality and ethical stewardship into action,” Kinman said.

Kinman said the church’s commitment to be a sanctuary church embodies “the sentiment on the banner on our lawn that Black Lives Matter.”

This article is republished with permission from Religion News Service.