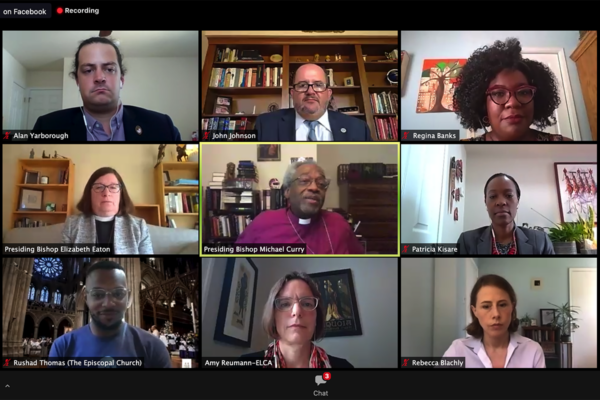 The webinar “Advocacy Tools for Loving Your Neighbor” was hosted July 9 by The Episcopal Church’s Office of Government Relations and its counterpart in the Evangelical Lutheran Church in America. It was livestreamed on Zoom and Facebook.

The Episcopal Church’s Presiding Bishop Michael Curry and Presiding Bishop Elizabeth Eaton of the Evangelical Lutheran Church in America, or ELCA, both participated in the webinar. Each spoke for about five minutes at the beginning, affirming that Christianity doesn’t just have something to say about contemporary society: It also calls on Christians to be advocates for justice.

“It’s probably not accidental that Jesus speaks of the spirit of God as the advocate,” Curry said, citing the Gospel of John. “The work of advocacy really is the work of love, and it is the practical work of love in the social and public context.”

The 90-minute webinar, titled “Advocacy Tools for Loving Your Neighbor,” was livestreamed on Zoom and Facebook and hosted by The Episcopal Church’s Washington, D.C.-based Office of Government Relations and its ELCA counterpart. The two churches share resources for some of their advocacy work – an international policy adviser is employed by both denominations, for example – and Curry and Eaton often speak together on social justice issues.

“Advocacy is a deeply spiritual discipline,” Eaton said, adding that the Lutheran tradition of advocacy dates to Martin Luther and is grounded in the biblical call to love one’s neighbor. In Luther’s teachings, “each person lives only for others, not for himself or herself,” she said.

The Office of Government Relations bases its advocacy in Washington on resolutions passed by General Convention. The office’s staff members monitor legislation, coordinate with partner agencies and denominations and develop relationships with lawmakers to convey the church’s values-based stances on issues.

The office also encourages Episcopalians’ activism through its Episcopal Public Policy Network, or EPPN. Rebecca Blachly, direct of the Office of Government Relations, began her presentation during the webinar by encouraging participants to sign up for weekly EPPN action alerts or the similar alerts distributed by the ELCA’s advocacy office.

“Sign up for both. Get double the advocacy in your week,” Blachly said. The alerts provide information on a range of issues being debated in Congress, from immigration policy to federal food assistance, and they include ways to connect directly with lawmakers.

Blachly also invited webinar participants to learn more about those issues, including through the resources developed and curated by her office and the ELCA. Some states have local advocacy networks to join, and it helps to seek out and partner with other community organizations that already are making progress on issues of interest, she said.

She and other webinar presenters also encouraged participants to simply call, write a letter to or send an email to lawmakers’ offices, making the case to them for legislative action while drawing on personal values and real-life stories.

Reaching out to elected officials helps hold them accountable, but it also offers them the expertise of their constituents, said Alan Yarborough, church relations officer in the Office of Government Relations. He also spoke of the importance of following the principles of civil discourse – advocating while also listening.

“We can hold fast to our values while also learning from others and seeking to understand where they’re coming from,” Yarborough said. Civil discourse isn’t about being calm and polite, he said. It helps “navigate differences” and break down barriers to change, “to hear one another, rather than shout at each other from a distance.” Yarborough helped develop the church’s civil discourse curriculum, “Make Me an Instrument of Peace.”

Getting counted in the census, voting in elections, and marching against injustices are the first steps to building political power and protecting our civil rights. Visit https://t.co/HaLh7IR7uK to fill out the census today. #FaithfulCensus #CensusCounts

Some forms of engagement are simple yet fundamental. Webinar participants were encouraged to complete this year’s U.S. census, if they hadn’t already, given the central role of census data in setting the contours of the American political landscape, from government funding to representation. The two churches also support efforts to get more people to vote, though Amy Reumann, the ELCA’s director of advocacy, emphasized that advocacy by churches must remain nonpartisan, especially in this election year.

Even so, Eaton said Episcopalians and Lutherans need not shy away from speaking out in the name of their faith beliefs. The First Amendment “keeps the government out of the church but in no way precludes the church from showing up in the public sphere,” she said. “The spiritual and the temporal are both established by God.”

Webinar participants were invited to submit questions, some of which were fielded by the panel. Reumann said several questions focused on how the churches and church members can support efforts to dismantle systems of racism that are still found in American institutions and society. The issue rose to the forefront of public debate this year after the killing of George Floyd and other Black victims of police brutality.

The ELCA has been working to fight against racism in society, Eaton said, but “we still have a lot of progress to make.” Curry said much of The Episcopal Church’s racial reconciliation work so far has focused its efforts on the church’s own historic complicity in racism and racist systems, most notably through the Becoming Beloved Community framework. Some Episcopal institutions and leaders have begun taking up the broader call of systemic social change, he said, and anti-racism resolutions dominated last month’s meeting of Executive Council.

Racial reconciliation also is a core component of the Office of Government Relations’ work in Washington, and the agency recently helped assemble resources for responding to racist violence. During the webinar, panelists further encouraged church members to join advocacy at the federal, state and local levels in favor of policies that will move communities and the country closer to racial and economic equity.

Reumann compared such work to farming redwoods: It takes time, but eventually the result is magnificent. Curry made a similar point toward the end of the webinar.