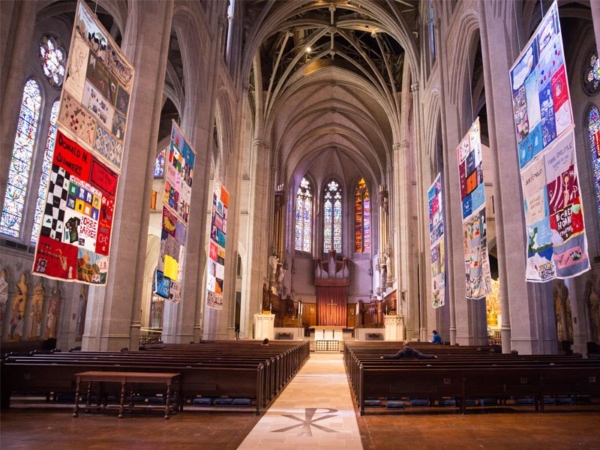 [Episcopal News Service] Grace Cathedral in San Francisco, the seat of the Diocese of California, will host an online interfaith service as part of AIDS 2020, the 23rd International AIDS Conference. The livestream event will include prayers and addresses from figures including California Bishop Marc Andrus; the Most Rev. Thabo Makgoba, archbishop of Cape Town and primate of the Anglican Church of Southern Africa; and U.S. House of Representatives Speaker Nancy Pelosi. 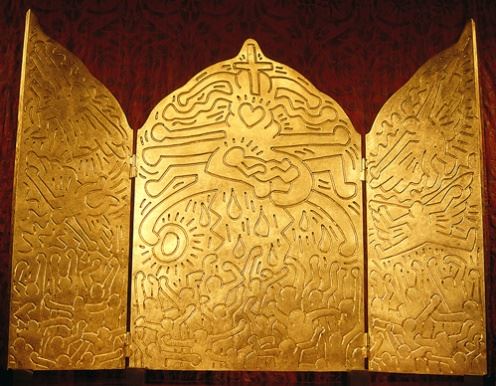 “The Life of Christ,” a triptych altarpiece by New York pop artist Keith Haring, is displayed in the AIDS Interfaith Memorial Chapel at Grace Cathedral in San Francisco, California. Completed in 1990, it was Haring’s last work before he died of AIDS. Photo: Grace Cathedral

The conference, which was originally scheduled to be held in San Francisco, is taking place online July 6-10, and the interfaith service will begin at 9 a.m. Pacific time on July 7. The service is being co-hosted by the Diocese of California, the Ecumenical Advocacy Alliance of the World Council of Churches, the San Francisco Interfaith Council and Emory University’s Rollins School of Public Health.

Andrus will begin and end the service live in the cathedral’s AIDS Interfaith Memorial Chapel, which features artwork by Keith Haring and was dedicated in 2000. The service – focusing on the themes of lament, resilience, hope and renewal – will feature prayers, music and contributions from leaders representing Christian, Muslim and Jewish groups, as well as Pelosi.

Pelosi, who lives in San Francisco, will offer welcoming remarks and also a more personal contribution. Susan Roggio, who was a flower girl at Pelosi’s wedding, died of AIDS in 1986, and Pelosi sewed a panel in her memory for the AIDS Memorial Quilt. That panel will be on display at the cathedral.

For ⁦@SpeakerPelosi⁩, the @AIDSQuilt is personal: She tears up at the ⁦@librarycongress⁩ when she mentions the panel behind her remembering Susan Piracci Roggio, who had been the flower girl at her wedding. pic.twitter.com/73bopVqBi6

The cathedral played a major role in The Episcopal Church’s response to the AIDS crisis in the 1980s and ’90s, welcoming HIV-positive people into the church at a time when they faced stigma and discrimination. It offered funerals for anyone who had died of AIDS, whether the person was a member of the congregation or not. The cathedral was burying up to 35 people a week at the height of the crisis in the early ’90s, according to the diocese, and many of the first panels of what became the AIDS Memorial Quilt were sewn there.

AIDS 2020, the world’s largest conference on HIV and AIDS, will offer more than 600 virtual sessions and events. This year’s theme is resilience, drawing attention to the work that remains to be done despite decades of dramatic progress. The effort to end AIDS, organizers say, has entered a “new phase” in which the challenges are less centered around research and treatment and more about “a deteriorating human rights climate, repressive and punitive national laws in many countries across the globe, increasing xenophobia and social exclusion, and the widening gap between those with and without access to health services.”

The interfaith service is open to all; any wishing to attend can RSVP on Facebook or Eventbrite.