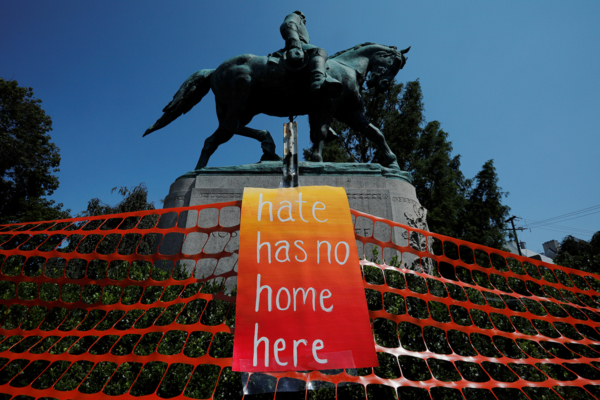 A sign reading “Hate Has No Home Here” hangs by the statue of Confederate Gen. Robert E. Lee in Charlottesville, Virginia, in 2018. Photo: Reuters

[Episcopal News Service] A month of nationwide protests against systemic racism and violence against African Americans has added urgency to efforts to remove Confederate imagery and symbols from public display. In Virginia, a law took effect July 1 lifting a key legal barrier to the removal of Confederate statues. But in Charlottesville, the wait continues.

Three years ago, Charlottesville was the epicenter of a renewed national debate over the legacy of slavery and the Confederacy after a white supremacist rally in August 2017 ended in clashes and violence, including the killing of a counterprotester. The hate groups said they chose Charlottesville in opposition to the city’s plan to remove its statue of Confederate Gen. Robert E. Lee.

Episcopalians joined others in the community in disavowing white supremacy, demonstrating alongside the counterprotesters. A month later, Presiding Bishop Michael Curry traveled to Charlottesville for a pastoral visit that emphasized the racial healing efforts of the three Episcopal churches in the city.

Charlottesville’s Confederate statues remain in place for now, however, because of a court injunction against their removal. The one depicting Lee astride his horse is impossible for the Rev. Paul Walker to ignore. As rector of Christ Episcopal Church in downtown Charlottesville, Walker’s office overlooks Emancipation Park, home to the Lee statue.

“I’m looking at it right now,” Walker told Episcopal News Service by phone on July 1. He’s encouraged by the recent momentum against Confederate symbols, but time will tell whether it leads to the removal of Charlottesville’s statues of Lee and Stonewall Jackson, another Confederate general.

“There’s been so much back and forth with it, I don’t put a whole lot of stock in anything until it actually happens,” Walker said. 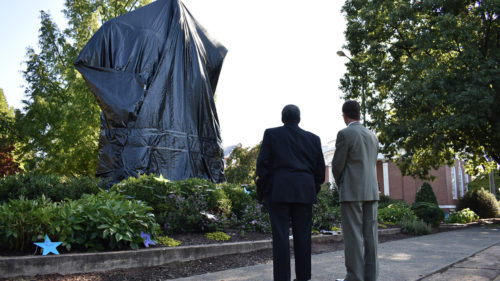 Presiding Bishop Michael Curry, left, stands at the foot of the Robert E. Lee statue in Charlottesville, Virginia, on Sept. 7, 2017, with the Rev. Paul Walker, rector of the nearby Christ Episcopal Church. The statue had been wrapped in plastic while the city fought a legal challenge to the monument’s removal. Photo: David Paulsen/Episcopal News Service

Protests against racial injustice have been widespread in cities across the United States, including Charlottesville, since the May 25 killing of George Floyd, an unarmed Black man, by police in Minneapolis, Minnesota. In addition to bolstering the push for criminal justice reforms, the deaths of Floyd and other recent Black victims of police brutality and white vigilantism have prompted cities and states to reconsider the appropriateness of Confederate imagery in public spaces.

Mississippi bowed to renewed pressure last month and agreed to retire its state flag, which featured a depiction of the Confederate battle flag. And in Richmond, Virginia, Mayor Levar Stoney vowed to get rid of the city’s prominent Confederate statues on Monument Avenue. Protesters in Richmond toppled a statue of Confederate President Jefferson Davis on June 10, and on July 1, the city, once the capital of the Confederacy, began removing other statues, starting with Stonewall Jackson.

“It’s time to move beyond the lost cause and embrace the righteous cause,” Stoney told NPR. “We can be more than just the capital of the Confederacy. It’s time for us to be the capital of compassion.”

The law that took effect July 1 initiated a process for Virginia communities to collect public input on their Confederate monuments and then potentially remove them. A previous state law barred removal or changes to war monuments or memorials, even when such actions had majority support.

In February 2017, the Charlottesville City Council approved the removal of the Lee statue. Later that year, after hate groups converged on the city Aug. 11 and 12, the City Council voted unanimously to remove the Jackson statue as well.

But the statues’ removal never occurred because a preservationist group calling itself the Monument Fund sued the city, saying the plan violated the state law protecting war memorials. In April 2019, a Virginia judge agreed, blocking the city from removing the statues.

Then this year, Virginia’s General Assembly passed legislation easing those restrictions on cities. Gov. Ralph Northam signed the bill into law on April 11, though it didn’t take effect until this month.

The Southern Poverty Law Center estimated in 2019 that more than 1,700 Confederate symbols remained on public display around the country, including more than 100 monuments in Virginia, despite increased efforts to have them removed. Most of the tributes to Confederate history were erected decades after the end of the Civil War, at a time when proponents of the Lost Cause myth sought to portray the Confederacy as a failed but noble campaign, downplaying its roots in defending slavery.

Charlottesville’s statues remain in limbo, still bound by the judge’s injunction, but on June 5, the Monument Fund essentially ceded defeat. It filed a motion acknowledging the change in law and asking that the injunction be modified accordingly.

“We’re not looking to drag this out any further; the Monument Fund’s argument has always been that the City Council’s actions did not comply with the law,” spokesman Charles Weber told the Daily Progress. “The law has changed and now there’s a clear process for removal that respects both sides of the issue.”

The city has appealed the case to the Virginia Supreme Court seeking final clearance to remove the statues.

Protests in Charlottesville after Floyd’s killing have included specific calls for the statues’ removal, including a recent march from downtown to the University of Virginia, said Walker, the Christ Church rector. The fate of the statues and related issues of racial injustice are “particularly raw for us in Charlottesville” because of what happened in August 2017, he said.

“I have found the protests heartening, because it seems to have coalesced a large group of people around the issues of police violence and equitable policy,” said Walker, whose mostly white congregation dates to 1820.

At Trinity Episcopal Church, a historically Black congregation northwest of downtown that now includes a multicultural mix of parishioners, some members of the congregation are active in the recent protests, according to the Rev. Cass Bailey, Trinity’s vicar.

“I think people are cautiously optimistic,” Bailey told ENS. “There seems to be broader momentum around addressing some of these issues.”

The church, founded in 1919, has long been involved in social justice advocacy work, he said, so “it’s not new to us.” But he senses other congregations now are willing to take up that work as well. On a recent Zoom meeting with diocesan clergy leaders, planning church responses to systemic racism dominated the conversation.

“I think it’s still very much a prominent issue for members of the congregation, as well as people in the city of Charlottesville,” Bailey said. As long as the statues remain standing, he said, they will remain powerful symbols of white supremacy.