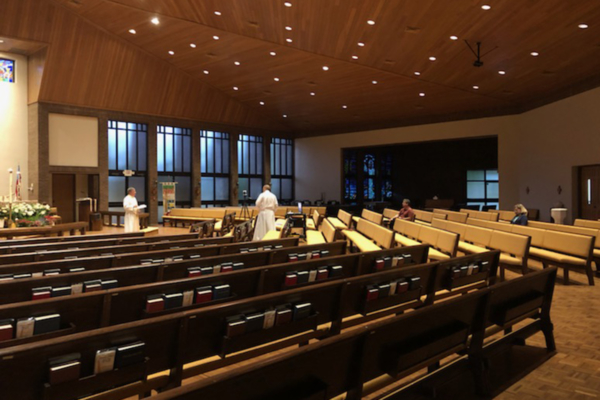 [Episcopal News Service] More than three months into the COVID-19 pandemic, with cases surging in some parts of the United States, Episcopal churches continue to take different approaches to in-person parish activities based on the number of cases in their communities and the guidance of local, state and federal health officials.

Most Episcopal churches nationwide began shifting to online worship services and fellowship in mid-March, when COVID-19 cases surged on the East Coast, in Southeast Michigan and around Seattle, Washington. Over the past two weeks, though, states in the South and Southwest, Oklahoma, Florida and California have reported the highest number of new cases.

In the Diocese of San Diego, which covers the southernmost part of California and southwestern Arizona, Bishop Susan Brown Snook allowed churches to resume in-person worship starting on June 21 in accordance with state regulations (which set a 25% capacity limit) and any additional local measures, as well as diocesan guidelines. Everyone must stand at least six feet apart, and choir and congregational singing is not allowed. Masks must be worn at all times, except when reading or preaching. The Eucharist may be celebrated, but only bread can be offered. The few churches that have submitted plans for reopening say they will also screen parishioners with touchless thermometers as they arrive.

However, San Diego County renewed its stay-at-home order on June 19. Although houses of worship are exempt, Snook urged churches in that county to only hold services outdoors. Snook also instructed churches in Imperial County and Arizona not to meet in person at all, due to high levels of transmission there.

Arizona is currently on the worst trajectory of any state, with a 42% increase in new reported cases since June 19. The state, which reopened for business on May 16, now has more documented cases per capita than hard-hit countries like Italy, Spain and Brazil. Maricopa County, which includes Phoenix, is recording over 2,000 new cases a day, worse than New York City on its worst days.

The Diocese of Arizona is still in phase one of its COVID-19 plan, meaning there are no in-person worship services or gatherings.

“Our Arizona churches are still in the early stages of our journey with COVID-19,” Bishop Jennifer Reddall wrote in a letter to the diocese. “We are not ‘there’ yet — and we are not going to be getting ‘there’ any time soon. This journey is not going to be a matter of weeks, but months or years.”

The Navajo Nation, which is served by the Episcopal Church in Navajoland, is one of the hardest-hit areas in the U.S., with more reported cases per capita than any state. Weekend lockdowns are being reinstated on the reservation. Navajoland’s churches remain closed for in-person worship until further notice.

Cases in Texas have increased 28% since June 19. Gov. Greg Abbott has reinstated some restrictions but is allowing businesses to remain open for the most part, and churches have been allowed to hold in-person services since early April under state law. Hospitals in Houston and Austin are preparing to expand capacity to address the surge.

Christ Church Cathedral in Houston, part of the Diocese of Texas, resumed in-person worship on June 21, with up to 60 people allowed in. Parishioners were required to register to attend, and to wear masks. Communion was celebrated with bread alone, and there was no congregational singing.

However, on the 25th, the dean of the cathedral announced that in-person worship was canceled for the 28th, citing the “startling” data coming out of the area’s hospitals.

“All but one of the criteria that push Houston’s COVID crisis meter into the red zone have now been surpassed: a 7-day average of greater than 100 new COVID cases, 7-day increasing trend in daily hospital population, and more than three days of greater than 15 percent ICU usage by COVID patients,” the Very Rev. Barkley Thompson wrote. Online worship will continue.

Florida, which began reopening on May 4, reported nearly 9,000 new cases on June 26 (as of the early afternoon). Reported cases there have increased 37% since June 19 – and 526% since Memorial Day. Gov. Ron DeSantis closed bars on June 26, but churches – which were never closed by a state order – can remain open.

The Diocese of Southeast Florida, which contains Miami, is still in phase one of its COVID-19 plan – meaning churches must remain closed for in-person worship, except for some feeding ministries and day care programs – until at least June 30.

“I am deeply aware that we are entering a time when congregational leadership will be coming under increasing pressure,” Bishop Peter Eaton wrote to the diocese when extending his initial closure order in late May. “I am also aware that the matter of re-entry and re-gathering in places of worship has become politicized, and this only adds to the complexity of discerning wise and prudent timing. … The leadership of the diocese is motivated solely by our shared discernment of the moral imperative of the well-being of those who constitute our communities.”

In the Diocese of Southwest Florida, churches have been allowed to open for in-person worship since May 31, with attendance limited to 25% of the church’s maximum occupancy. Masks are “highly recommended” and parishioners are instructed to stay six feet apart. Communion may be offered as bread only.

In a letter to the diocese on June 23, Bishop Dabney Smith said he was concerned about the increasing spread of COVID-19 in the diocese but that diocesan policies remain the same.

“It is our role to take care of our people; again I remind you this care includes some of our at-risk clergy,” Dabney wrote, encouraging congregations to carefully consider their own practices.

Meanwhile, in the Northeast, governors in New York, New Jersey and Connecticut on June 24 announced that travelers arriving from hotspots outside the tri-state area would be required to quarantine for 14 days.

In the Diocese of Newark, where the governor has set the limit for indoor gatherings at 100 people or 25% of maximum capacity and at 250 people for outdoor gatherings, Bishop Carlye J. Hughes issued a 36-page document on June 23 containing guidelines for in-person worship.

In the Diocese of New York, which includes parts of New York City and stretches north into the Hudson Valley, in-person worship remains suspended through July 1.

“I write to you one week before the July 1 date at which limited resumption of public worship will be permitted in the Diocese of New York. I want to say at the start that I have no expectation that churches will resume public worship at this time. A significant number of our churches and clergy are telling me that they do not intend to reintroduce worship inside their churches until September or the end of the year. I completely respect those decisions,” wrote New York Bishop Andrew Dietsche in a June 24 letter to the diocese, asking that churches continue virtual worship.

“From the start we have said that this is permission, not requirement. COVID is a very dangerous disease – fatal for too many – and a whole lot of our people, and our clergy, are high risk due to their age or underlying health conditions. Safety must be our first concern. We have learned how to have effective, enriching worship and a robust community life, even while distanced, over the last three months. Continuing those distanced practices and relationships until we see that it is safe to come physically together is a decision which is faithful and sensible. We are seeing that in other parts of our country which have ‘reopened’ early, churches are already being revealed to be centers of new infections. We cannot let that happen in our churches, and that means observing strict disciplines in our practices,” Dietsche said.

In a June 19 letter to clergy and wardens in the Episcopal Church in Connecticut, where the state is in the process of reopening, Bishop Ian T. Douglas and Bishop Suffragan Laura J. Ahrens urged people in at-risk categories and people age 65 and older “to stay home and stay safe,” and for those parishes considering in-person worship to consider holding services outdoors.

“This is not a time to go rushing back to in-person worship as we have known it in the past,” the bishops wrote. “We recognize that many parishes are beginning to resume in-person worship and are using the ‘Living with COVID-19’ protocols and directions that we have promulgated as guidelines. We appreciate the deliberate, careful and collaborative way that you, the clergy and lay leaders in ECCT, are considering what is best for your parishes in this new phase. Thank you for your ongoing faithful and inspiring leadership.”

Massachusetts, initially one of the hardest-hit states, now has the lowest rate of positive COVID-19 tests in the nation, with a seven-day positive test rate average of 1.9% as of June 25. The Diocese of Massachusetts suspended in-person worship in late March, and the bishops’ directive was extended until July 1. On June 15, the bishops told the diocese that congregations may reopen for in-person worship starting July 1, but strongly encouraged them not to. Parishes that wish to resume in-person worship must confirm that they will be able to meet state and diocesan criteria.