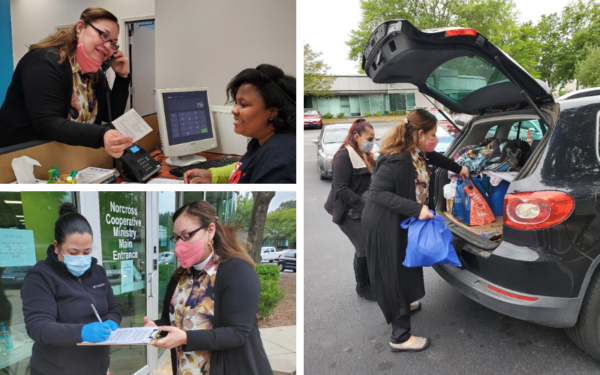 The Rev. Irma Guerra volunteers at Neighborhood Cooperative Ministries in Norcross, Georgia. Photos courtesy of the Diocese of Atlanta

[Diocese of Atlanta] Concerned by the increasing financial needs of the Latino community in Gwinnett County, Georgia, due to the COVID-19 pandemic, the Rev. Irma Guerra began searching for ways to fill those needs beyond what her parish was doing.

The associate rector for Hispanic ministry at Christ Episcopal Church in Norcross’s search led her in April to begin volunteering at Neighborhood Cooperative Ministries.

“I have been working as an interpreter, making and receiving phone calls and helping people to fill out their forms to request food, groceries, medicine [and money to] pay bills or rent,” Guerra said. “I’m there Wednesdays and Fridays from 10 a.m. to 2:30 p.m., representing my Lord first, of course, and Christ Church Episcopal.”

“Innovative responses to COVID-19 by Rev. Guerra and other Latinx clergy are why Hispanic missions are vital to the Diocese of Atlanta’s ministry in Middle and North Georgia,” said Bishop Rob Wright.

Wright, who oversees the diocese’s 117 worshiping communities, said Hispanic congregations have grown rapidly since he was ordained bishop in 2012, with twelve now flourishing in the diocese.

Guerra, who prefers to go by the name Mimi, moved to the United States from her native Mexico in 1994. Before becoming one of the first female Hispanic priests in the Diocese of Atlanta in 2018, she was an educator for 30 years and was a Spanish teacher for Douglas County Schools.

A lifelong learner, Guerra earned a bachelor’s degree in Spanish in 1989 from the University of Victoria and a child development associate certification at Kennesaw State University in 2002. She has also completed English classes at the Cobb County Adult Education Center and clinical pastoral education at the Training and Counseling Center of St. Luke’s Episcopal Church in Atlanta.

But Guerra’s life took on a radical new dimension when she attended CETLA (the Theological Education Center for Latinos), an innovative program begun in 2014 by the Diocese of Atlanta. After completing CETLA, Guerra continued her preparation for ordination, first as a deacon and then as a priest.

On June 23, 2018, Guerra and the Rev. Gregoria Betances were ordained as the diocese’s first female Hispanic priests. Betances now serves Iglesia del Buen Pastor (the Church of the Good Shepherd) in Austell.

As a child, Guerra said, she aspired to be a nun, but her father encouraged her to become a teacher. However, she never gave up on her dreams of working in the church, and today, in addition to her work as a translator for Title I public schools, she devotes time to helping people build a closer relationship with God.

As priest in charge of Christ Church’s Hispanic congregation, Guerra said she remains focused on finding innovative ways to accomplish the parish’s mission to “live, love, and serve boldly together in the name of Jesus Christ.”