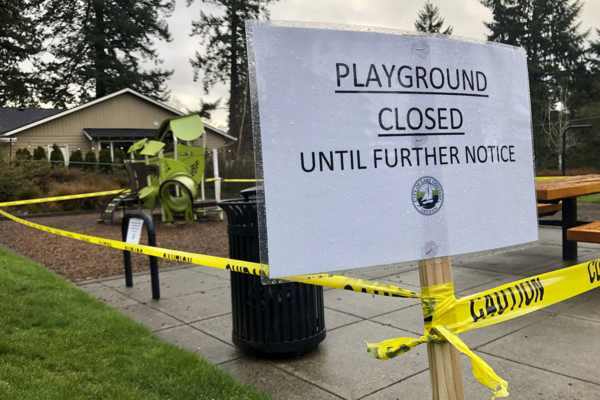 Police caution tape surrounds a playground in Lake Oswego, Oregon, on March 24, 2020, the day after Gov. Kate Brown issued a statewide stay-at-home order that closed all playgrounds and sports facilities. Government and public health officials fear a potential spike in domestic violence, as victims shelter at home with their abusers. Photo: Gillian Flaccus/AP

[Episcopal News Service] As states and cities continue to ask citizens to shelter in place to slow the spread of the new coronavirus, Episcopal-affiliated ministries that serve victims of domestic violence are finding new approaches to caring for the vulnerable in their communities.

As COVID-19 cases and deaths in the U.S. continue to rise, with over 1.3 million cases and 80,000 deaths as of May 12, incidents of reported domestic abuse have increased. Ministering to those most at risk can be hard, as victims and survivors could be sheltering in place with their abusers.

The Rev. Becca Stevens, founder and president of Thistle Farms – a nonprofit based in Nashville, Tennessee, that aids female survivors of prostitution, trafficking and addiction – told Episcopal News Service that COVID-19 has made it harder to respond to the special needs of the community.

“So we’re asking, ‘How can we respond in a way that’s life-giving and respectful?’” she said.

Thistle Farms runs a two-year residential program for women that focuses on recovering from addiction and becoming self-sufficient. Part of the program provides education and group therapy to women in prison who are expected to go into the residential program once they are released. Even after women graduate from Thistle Farms, they’re still considered part of the community.

For women who are a part of the community but no longer in residence at Thistle Farms, the COVID-19 quarantine can pose added stress. Even before the pandemic, there was always a chance that residents would go back into abusive relationships once they left the support of the shelter residence, Stevens said.

“Women will graduate and go back into dangerous relationships even after doing heroic work and recovering and getting off the streets,” she said. “This has been a concern of ours for a long time.”

Plus, people in recovery have a fear of relapse even under the best of circumstances, let alone during a terribly disruptive public health crisis, she added.

Since the pandemic began, Thistle Farms staff and volunteers have included a card in their “porch-to-porch” delivery service that brings food and other necessities to people in the Thistle Farms community who are no longer in residence. The card says: “This is for you. Love, your community. Please let us know if you need anything.”

In Texas, an Episcopal church-based behavioral health ministry serving low-income Hispanic communities has moved its counseling services online because of COVID-19 but acknowledges that asking women to shelter at home with abusers potentially increases the danger.

“We are telling people, ‘Stay home to stay safe,’ but not all homes are safe,” said Marisol Salgado, a bilingual counselor who runs the behavioral health ministry at St. Paul’s/San Pablo Episcopal Church in Houston.

“I have clients who I cannot call because it’s a safety issue,” she said. “It’s not safe to talk to me in their homes.”

The Rev. Ed Gómez, vicar at St. Paul’s, set up the program with help from Episcopal Relief and Development in response to the visible increase in anxiety, depression, isolation, sexual violence and assault associated with Hurricane Harvey and its devastating aftereffects on Spanish-speaking communities served by Episcopal churches across Houston.

Harvey-related unemployment and financial problems increased the risk of family violence, according to a study by the Texas Council on Family Violence.

“People will go for everything to their clergy, but I’m not a therapist,” he said. “How you relate to Jesus is one thing. How [a situation] affects your drinking, your domestic relations, is another thing.”

“After San Pablo had 700 people come for a food distribution event, someone left a voicemail message with the church to say thank you, and they started to cry,” Gómez said.

“This person was really in need, really in pain, really in fear,” he said. “That kind of thank you – it’s depressing.”

Texas began a phased-in, limited opening of certain businesses on May 1. Though Gómez said it would be a relief for some people to get back to work, his church community members often are viewed as cheap labor.

“It is highly doubtful that [employers] will provide a safe work environment by providing masks and gloves,” he said in an email.

Salgado’s concern about how to contact people still in abusive home situations was echoed by the Rev. Paul Feuerstein, a social worker and priest. Feuerstein is the founder and CEO of Barrier Free Living, which operates an emergency domestic violence shelter for people with disabilities in New York City.

Feuerstein estimated that about 50% of the people who are in touch with Barrier Free Living counselors – now only via phone or video – are living with their abusers.

“That’s a real challenge because being in touch with folks can be dangerous,” he said. “So we have to let the women take the lead – because oftentimes they are waiting for the abuser to leave the house.”

“I think it was the phenomenon of being at home with abusers and not knowing how to reach out for help,” he said. But the calls have picked up since then.

Barrier Free Living’s shelter was slightly under capacity before COVID-19 arrived. Now it is at capacity. The shelter does have separate apartments for residents – a boon in a time when group living situations can hasten viral spread.

Nevertheless, group activities have come to a halt, which can be especially hard on children who live with a parent in the shelter. Housing parents and children escaping abusive homes requires extra precautions, even for something as straightforward as getting children online for school.

Feuerstein himself had to take iPads to the children at the shelter instead of having them delivered because the shelter location is confidential.

Episcopal Church members also have stepped up advocacy against gun violence as weapon sales rise during the pandemic. A gun in the home is an added risk for domestic violence and suicide.

At a time when all eyes are trained on COVID-19 and its effects on communities and businesses, Douglas says he doesn’t want the issue of guns to be “lost in the mix,” as he believes the pressures of isolation and lost employment could exacerbate gun violence.

He pointed out that many bishops have access to their elected officials, so Bishops United Against Gun Violence is encouraging them to contact their representatives and advocate for sensible gun legislation.

“Then we ask bishops to speak with their clergy to keep a watchful eye out in situations where there might be an increased risk for suicide or domestic violence,” Douglas said, “or if they know parishioners who suffer from depression, or domestic violence – and not be afraid to ask the question: Is there a gun in the home?”