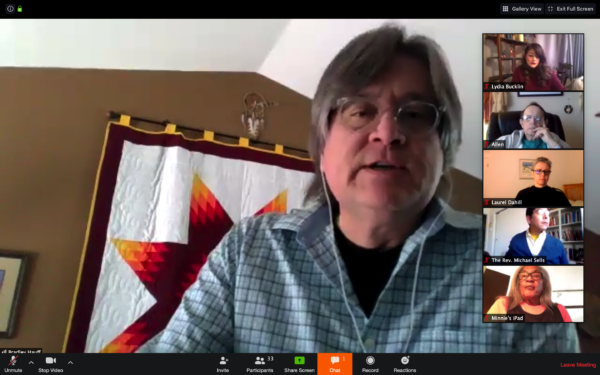 The Rev. Bradley Hauff, The Episcopal Church’s missioner for indigenous ministries, leads an April 22 meeting on Zoom with clergy and lay leaders who minister to indigenous communities.

[Episcopal News Service] The meeting had no agenda. Sharing was voluntary. The Rev. Bradley Hauff made clear at the outset of the hourlong video conference call that he and the call’s 32 other participants were there to listen and learn from each other’s experiences in indigenous communities in the United States during the COVID-19 pandemic.

“This is just an opportunity for us to share how we’re doing and what’s been happening in our regions, particularly in response to the pandemic and its effects on our lives and on our congregations,” Hauff, The Episcopal Church’s missioner for indigenous ministries, told the participants.

He and other church leaders have emphasized some troubling parallels between the varied regional experiences of American Indian tribes, which may leave these communities particularly vulnerable to coronavirus outbreaks. Villages often lack quality medical care, or residents must travel great distances for treatment. Many live in remote “food deserts” where clean water also is scarce, often because homes lack indoor plumbing, making it harder to wash hands frequently. Indigenous communities tend to suffer from higher rates of underlying health problems, such as diabetes and heart disease. And many Native American cultural traditions center on communal gatherings, from the Sun Dance to large family funerals – gatherings that now risk rapidly transmitting the virus.

Such challenges and others tied to poverty are “just exacerbated” by the pandemic and by the restrictions on movement intended to slow its spread, the Rev. Paul Sneve said April 22 as he described for participants on that day’s call the latest conditions in the Diocese of South Dakota, where he serves as archdeacon. 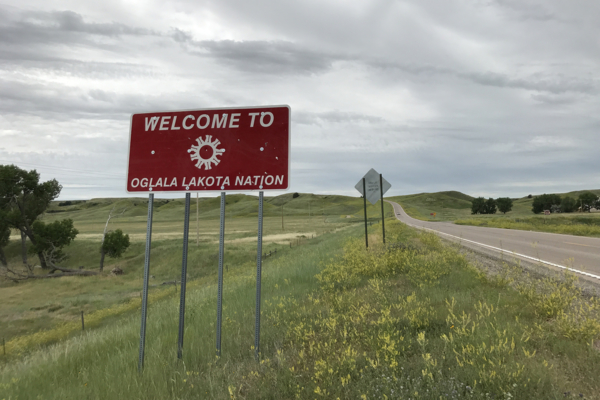 A sign welcomes motorists to the Pine Ridge Reservation in South Dakota. Tribal authorities had restricted movement onto and off the reservation as a precaution against COVID-19 until April 26, when the lockdown expired and was not renewed. Photo: David Paulsen/Episcopal News Service

Despite such parallels, the range of regional experiences has been nearly as diverse as the American Indian tribes that were represented on the call. Pine Ridge Reservation in South Dakota, for example, was on lockdown until April 26, when those restrictions expired. So far, no coronavirus outbreak has been identified there. The situation is more alarming for the Navajo Nation, which covers 27,000 square miles in Arizona, New Mexico and Utah. Tribal leaders there have implemented rolling curfews as they respond to dozens of new coronavirus cases each day.

“We have resources that currently now are meeting the needs, but I don’t think we’ve seen the peak of this pandemic virus spread,” said Rev. Leon Sampson, assistant priest at Good Shepherd Mission in Fort Defiance, Arizona. He said the tribe and church leaders need to be able to respond effectively if and when the situation worsens. “This is going to get bigger and bigger and bigger.”

Hauff began organizing these weekly calls on March 25 through the video conferencing service Zoom. Each Wednesday, he is joined by a mix of clergy and lay leaders serving on reservations or at mission churches. On the April 22 call, Hauff allowed Episcopal News Service to join the Zoom meeting and observe. Many of the participants were based in the Midwest, ministering to Episcopalians in North and South Dakota, Minnesota, Wisconsin and Michigan. Several represented the Episcopal Church in Navajoland. Alaska Bishop Mark Lattime and Northern Michigan Bishop Rayford Ray also participated.

Episcopal leaders and congregations in Navajoland are supporting tribal efforts to address the outbreak there, said the Rev. Cornelia Eaton, who serves as Navajoland’s canon to the ordinary for ministry and is based in Farmington, New Mexico. “Communication is what’s going to get the needs to people and also building partnerships with other organizations in the area,” she said. Clergy also continue to tend to residents’ spiritual needs through prayer and worship.

“Spirituality is really what it’s going to have to be about to get us through these moments of uncertainty, of fear,” she said.

Indigenous ministers around The Episcopal Church have been taking various approaches to maintaining the faith life of their congregations since widespread stay-at-home orders and social-distancing mandates forced suspension of in-person worship.

Native Alaskan villages in the state’s vast Interior region are largely without reliable internet service, Lattime said, but they often communicate with each other by citizens band, or CB, radio. On Lattime’s phone calls to some of the villages, residents put their phones up to CB receivers so he can pray with all who are listening on the other end.

Navajoland has been expanding its online worship offerings. Eaton, Sampson and the Rev. Michael Sells, priest-in-charge at All Saints in Farmington now lead weekly Sunday services that are livestreamed on Facebook. Navajoland also has started using Zoom for Bible studies.

The Rev. Marilyn van Duffelen also was on the April 22 Zoom conference representing St. Paul’s Indian Mission in Sioux City, Iowa. She told ENS in a separate interview that she decided not to lead worship services online because she feared it would encourage groups of virtual worshippers to gather physically in the few homes with Internet service, against the advice of health experts.

Instead, “I’m on the phone a great deal, and texting is also quite a popular way to keep in touch,” she said.

The Rev. Edward Hunt, a priest who serves 10 congregations on the Pine Ridge Episcopal Mission in South Dakota, began preaching sermons on Facebook from his office in Martin, South Dakota, in lieu of his usual rotation of in-person services at the various churches. Although Hunt didn’t participate in Hauff’s April 22 meeting, he has joined previous calls and found them helpful.

“Everyone is concerned about their people, and they’re doing whatever they can to make sure that their people are protected well taken care of and respected and not ignored,” Hunt told ENS by phone.

Hunt created a phone tree of his congregations’ contacts, and he typically makes about 20 phone calls a week to see how members of the congregations are doing and to pray with them. He also has wrestled with how to handle funerals during the pandemic while respecting indigenous customs. Oglala Sioux wakes and funerals typically span several days and can draw large extended families of several hundred relatives.

“Asking people not to do that is a real hardship,” Hunt said. Even if families proceed with such gatherings, he has instructed the reservation’s priests and lay leaders to conduct only brief outdoor services for burials.

Funerals are challenging for Native Alaskans as well, Lattime said. He sent booklets containing the Book of Common Prayer’s burial liturgy to clergy and lay leaders in the villages of the Interior region so they can officiate a simple graveside services, rather than full funerals. “When travel back to the villages reopens, people will be able to have a memorial service and really celebrate the life of the person who has died,” Lattime said on the Zoom call.

The spread of COVID-19 over the past two months has disrupted everyday life across the United States and upended how The Episcopal Church ministers to communities in all corners of the church. Church leaders across the Anglican Communion have warned that indigenous communities worldwide face unique challenges in responding to the pandemic, and Hauff joined a meeting in late March to discuss those issues with the Anglican Indigenous Network.

“We as a people have seen this happen,” Hauff, who is Lakota, told ENS in a phone interview. “Europeans brought diseases, and sometimes they purposely introduced pathogens to indigenous villages, and we had no immunity to them and whole tribes were wiped out.”

One way the coronavirus pandemic differs from past outbreaks is its subtlety, Hauff said. Although more than 50,000 Americans have died, most cases are mild and do not require hospitalization – which, Hauff said, sometimes makes it more difficult to persuade Native Americans to take precautions necessary to stop its spread. Reports indicate that data on the coronavirus’ spread among American Indian patients is not being closely tracked because of how governments are recording racial demographics.

Many tribal leaders, however, are taking the threat seriously – closing off Alaskan villages, restricting movement on and off reservations and urging residents to avoid large gatherings.

The Navajo Nation’s measures have included 57-hour curfews each weekend under the tribe’s declaration of a state of emergency on the reservation. This week, the number of confirmed COIVID-19 cases there topped 1,700, including at least 59 deaths.

“Let’s continue to stay home, unless you have an emergency or if you need food or medication, to slow the spread of the virus,” Navajo Nation President Jonathan Nez said in an April 26 news release. “Now is not the time to let our guard down. Let’s keeping fighting COVID-19 together.” 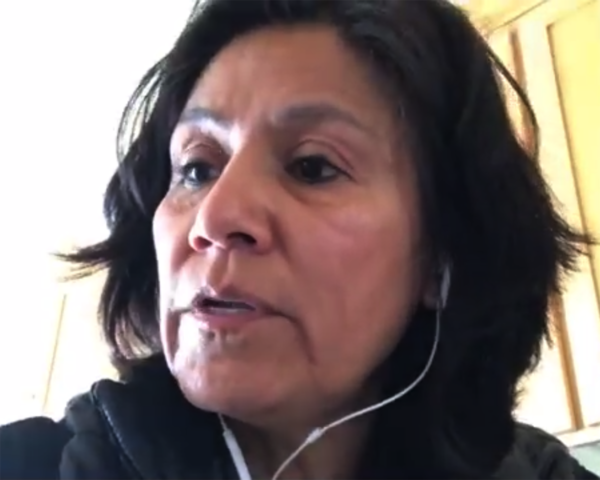 The Rev. Cornelia Eaton, the Episcopal Church in Navajoland’s canon to the ordinary for ministry, participates in the April 22 meeting on Zoom with other clergy and lay leaders serving indigenous communities.

During the April 22 Zoom meeting with indigenous ministers, the discussion included highlights of fundraising efforts by the Diocese of Northern Michigan to support Navajoland. Some on the call suggested other ways people around The Episcopal Church can send help.

Minnie Steele, a lay leader from the Episcopal Church in Minnesota, shared news that First Nations Kitchen, a feeding ministry at All Saints Indian Mission in Minneapolis, has stopped serving its weekly meals. Meal organizers hope to reopen as conditions improve, when there is less risk of spreading the coronavirus to guests and volunteers.

Eaton, in Navajoland, said no one knows how this crisis will evolve or when it will end, but she is encouraged by the ways Episcopalians are being true to their Baptismal Covenant.

“Everybody’s doing their best,” Eaton said. “This is for the long haul, and we need to support each other.”