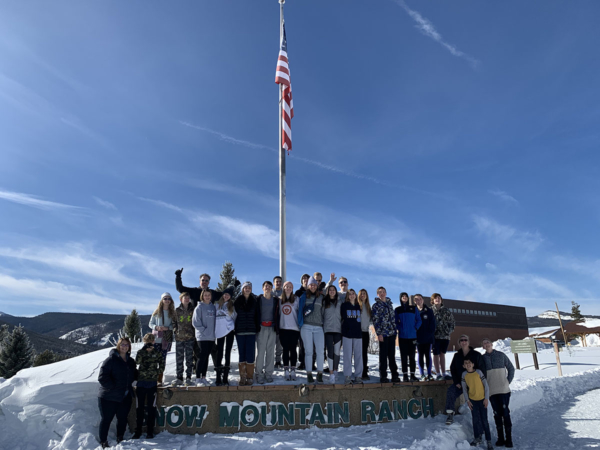 [Episcopal News Service] In normal times, the Rev. Nate Huddleston doesn’t have to go out of his way to see the youth and families of St. Philip’s Cathedral in person. Huddleston, who is the Atlanta Episcopal cathedral’s priest associate for youth and young adult ministries, met with teens regularly, talking to them face to face and shaking hands with parents.

These days, though, with strict coronavirus-related restrictions limiting human contact, Huddleston has a new ritual. About twice a week he gets into his car, drives to the homes of several families, parks in front of each house, and then calls the family. Huddleston stays in his car, at a safe distance, and “they come out to the front yard, we say ‘hey,’ I give them a blessing and go on,” he recently told Episcopal News Service. 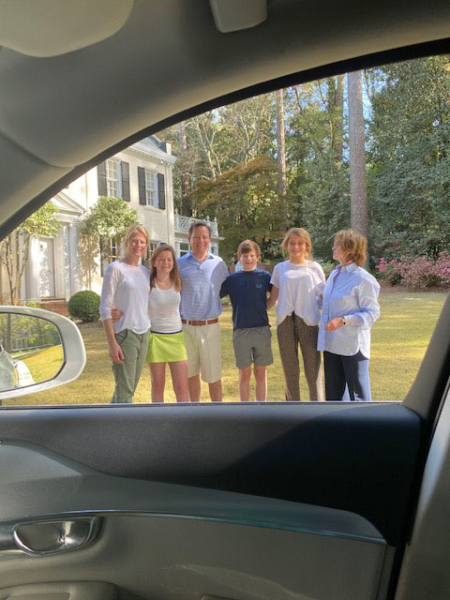 In Atlanta, Georgia, the Rev. Nate Huddleston has been conducting drive-by blessings during the pandemic. Here, seen from Huddleston’s car, is the Brown family (from left to right): Karen Brown, Caroline Brown, Scott Brown, Thomas Brown and Mariea Sibley. Eighth grader Caroline Brown is a confirmation student at the Cathedral of St. Philip, where Huddleston is a priest associate for youth and young adult ministries. Photo: Nate Huddleston

Huddleston calls it a drive-by blessing, and it’s one of several new tools that those in youth ministry have devised in recent weeks as youth groups — like so much else — have found life beyond their normal in-person context. Virtual scavenger hunts, room tours, and games help to maintain bonds.

At Good Shepherd Episcopal Church in Dallas, Texas, Director of Student Ministries Lauren Wainwright has launched a new weekly program. Tuesday nights, the church’s sixth through 12th graders “are looking at episodes of ‘The Good Place’ on Netflix and doing a Bible study using Zoom and Netflix [Party],” Wainwright explained via email.

In Venice, Florida, youth at St. Mark’s Episcopal Church can take part in a daily photo challenge devised by Director of Youth and Family Ministries Jackie Overton. For Easter, other youth ministers delivered treats to youth group members. Some are emailing more with parents or beefing up their program’s social media presence. Huddleston has been texting prayers.

Each is experimenting with staying connected and ministering to youth and families at a time when Zoom youth group is the norm. In March, when Episcopalians stopped gathering in person, youth groups quickly migrated to virtual spaces including Zoom, an online conferencing platform. These groups generally serve middle schoolers, high schoolers or a combination, and provide not only a time for Bible study or other faith formation but also a chance to hang out, play games, and share the week’s highs and lows.

Zoom has become a home to Episcopal youth groups whose families have the necessary technology, internet connection and momentum to stay in touch during the pandemic. “Youth groups across The Episcopal Church [are] vastly different, depending upon funding, depending upon rural tendencies, as well as, literally, population,” said Bronwyn Clark Skov, The Episcopal Church’s officer for youth ministry. Whether by necessity or by choice, some youth groups have gone dormant, at least for now. The rest are living through an experiment in virtual faith formation and youth support.

Digital-native tweens and teens have integrated Zoom into their lives with ease, even as some youth ministry staff have felt the stress of having technology mediate their leadership.

“There are some learning curves, like how long a discussion will take online, and how it has to be facilitated a little more formally because of it being in the digital space,” Sally Ulrey, director or formation and youth ministry at St. Columba’s Episcopal Church in Suwanee, Georgia, said via email. They have forged ahead, though, tinkering with their normal schedules, dropping the Sunday school portion of their youth program, or moving meeting times to better accommodate teens’ new lifestyles and needs.

Miriam McKenney, youth ministries coordinator at Calvary Episcopal Church in Cincinnati, Ohio, initially added a midweek check-in to the virtual program for her youth group of 10. But like others in her position, “I could tell that it was just one thing too many,” she said. “And so I’ve done more texting and individual conversations with them instead.”

Meanwhile, the Diocese of Atlanta has seen consistent attendance at its new Guitars + Compline program, and the Cathedral of St. Philip, where Huddleston works, successfully migrated its Fellini’s Tuesday Night Bible Study from a local pizzeria to Zoom. In fact, the Bible study has drawn new attendees, as have other programs. In Cincinnati, McKenney hasn’t drawn a larger crowd, but her youth have become stalwart attendees. Typically, “church is competing with baseball practice, dance practice, all kinds of other things,” she said. “Now that everyone is home, everyone comes [to youth group].”

Now, competition comes from the very tools allowing them to meet. Skov notes a general safety concern with online programming: “We don’t want to expose [youth] to solicitation or illegal content, and we want to make sure that we’re not giving adults who should not have access to young people access by our own clueless use of technology.” Despite concerning problems with the video conferencing platform, organizations and schools alike adopt safeguards and use it, or something similar, to bring youth together via their screens. 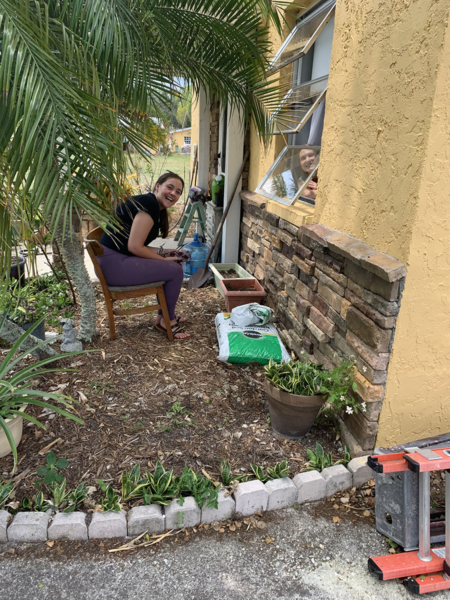 When Jackie Overton, director of youth and family ministries at St. Mark’s Episcopal Church in Venice, Florida, delivered Easter baskets to her youth’s homes earlier this month, at one stop she found two teens visiting each other while maintaining social distance. Photo: Jackie Overton

“We were about average with attendance until our school system figured out virtual schooling,” said Overton, in Venice, Florida. “Now some of my kids are ‘burnt out’ being on Zoom or connected digitally, as they have to be for a lot of their classes.”

This remains on youth ministers’ minds, hand in hand with a widespread commitment to kids’ emotional well-being and connection with others. Faith formation, for now, is largely a boots-on-the-ground endeavor, as youth groups learn in real time the value and role of faith amidst potential despair.

McKenney, who was tested for COVID-19 after returning from a trip to Spain in March (she tested negative), brought up illness and loss early in their virtual youth group sojourn. “I told them that very first day … you’re going to know people who get coronavirus, you’re going to know people who die from this,” she said. “These conversations, they can be had, and I believe they need to be had.”

The youth ministry leaders who have been in touch with ENS said that job loss, illness and deaths from COVID-19 had, so far, spared their youth communities. Tiffany LaMotte, director of youth ministry at St. Michael and All Angels in Dallas, Texas, is waiting to help kids deal with those losses. “We will consult with our pastoral care team at the church and handle it on a case by case basis,” she said via email. “We will not be making one plan to handle everyone the same, we will do it as it happens.”

But every youth group is already an epicenter of grief — young people are already living with fresh loss.

“One thing I have consistently noticed throughout all of this is the sadness. You can see it in their eyes. Students who miss their friends, their schools, and even their teachers,” said Wainwright. Skov also acknowledged this reality. She noted that in a recent meeting, a diocesan youth minister said that a “youth minister [should function] more as a spiritual director right now in order to help young people to connect in ways that are meaningful for them,” she said, “…and to allow them the space to lament.” To that end, Ulrey offers a weekly devotional Scripture reflection, which she hopes will help her youth to frame the current reality and to cope.

Youth ministers are also puzzling over how and when to honor graduating seniors and how to hold confirmations — will they postpone them, or offer them virtually? Upcoming pilgrimages and other summer events hang in the balance as well.

For now, with at least 35 states’ schools closed until next fall at the earliest, youth ministers plan to keep programming available to teens. “Because schools are not looking to reopen soon, I think the consistency of youth group and the community that it provides is so important right now,” said Wainwright. It’s a unique nexus of emotional support, play and shared faith.

At some point, pandemic-related restrictions will loosen, and Zoom youth groups won’t be the only option. When that happens, those working with youth don’t anticipate a return to the old status quo. “I do think … youth ministry will look different,” Huddleston said. “I think there will be a surge in participation, and that momentum may sustain, or it may not. I think some youth groups will continue to offer virtual spaces.” Ulrey agrees: “Some youth are, for whatever reason, more able or more comfortable joining virtually,” she said via email. “There are lots of questions … around what can digital membership/engagement look like? Can you be a virtual member of a youth group and what would that look like? What does that mean for discipleship?”

Until then, Ulrey will continue to meet virtually with the youth cohort she described as resilient, a word other youth ministers used, too. “They show up for themselves, and they show up for others,” she said. “They haven’t given up on doing that, on trying to be present. They haven’t quit.”