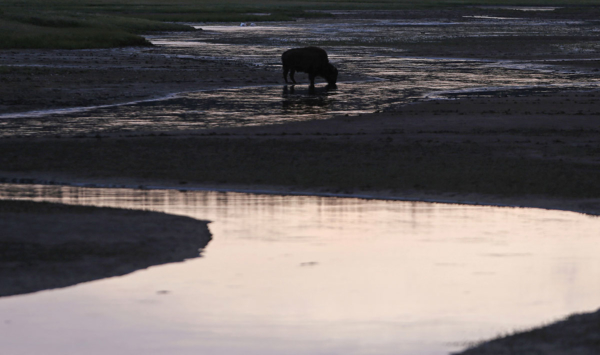 [Episcopal News Service] Each of the 46 congregations in the Episcopal Diocese of Wyoming has received a $10,000 grant and instructions to take Holy Week to discern ways to spend it to aid those affected by COVID-19.

For the Rev. Roxanne Jimerson-Friday, who serves two congregations on the Wind River Reservation, the needs are painfully clear and relief from the pandemic is absolutely essential.

“Unemployment was already high on the reservation, probably about 50 to 60%,” according to Jimerson-Friday, the first woman Shoshone Tribal member ordained in The Episcopal Church. “Now, it is even higher. Businesses have closed. People have been laid off. There are two grocery stores on the reservation. One closed yesterday because they had an employee who tested positive.

“There are about 26 people in our county that tested positive out of 200 cases in the state, and 11 of those are from the reservation,” she said.

Jimerson-Friday, who serves both Our Father’s House Episcopal Church in Ethete and the Shoshone Episcopal Mission at Fort Washakie, said members are making DIY face masks to aid others and are hoping to work together to create a food bank and a help center.

“We’d like to start a food bank with nonperishable items, and then we’re looking to see if we could get diapers, baby wipes and other items for young families,” Jimerson-Friday said.

Wyoming Bishop John Smylie, in an April 3 letter to congregations, wrote: “Our hope is that you will dream of ways you can make a love-spreading difference in the lives of those negatively impacted by this crisis. We are asking that you distribute these dollars within 60 days to meet the most pressing needs you currently discern.” 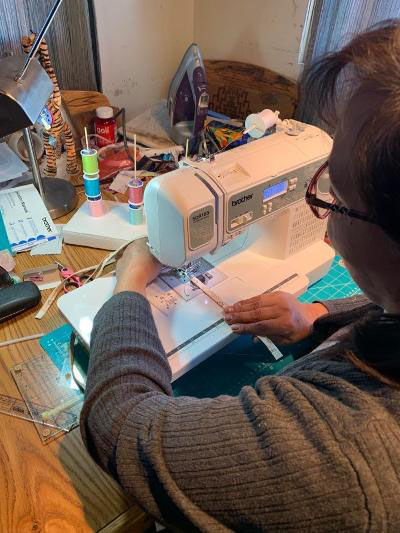 The grants are part of the $1 million commitment to COVID-19 pandemic relief made by the Foundation for the Episcopal Diocese of Wyoming, according to Gary Hartman, a board member. Congregations are asked to spend the funds on childcare, vulnerable adults, food insecurity or other assistance, but not on church capital expenditures or operating costs.

The foundation has assets totaling $78 million currently, mostly from private gifts and bequests, according to Press Stephens, executive director. A large part of the foundation’s funds derived from a bequest from a donor in the cable, radio and television business, he said. “It’s a remarkable story of how those gifts can do God’s work in a remarkable way. It’s just a good story of a remarkable planned giving arrangement by someone who really cared about his church.”

Stephens said the foundation wanted to get the funds disbursed as quickly as possible “because people needed the money yesterday.”

Hartman said the foundation is encouraging churches to work with community partners. “There are a lot of nonprofits in these communities, both city- and county-based, including food banks, who are providing meals for kids not attending school.”

COVID-19 has resulted in food insecurity; loss of jobs; and insufficient income to pay rent, mortgages and utilities. “If the money could not be used by the local congregation in the next 60 days, we’ve asked that they come back to the diocese with a plan of how they intend to spend the money,” Hartman said.

The novel coronavirus first originated in China in late December and has since spread worldwide killing 76,500 people. In late March, New York City became the U.S. epicenter, with the virus since spreading to all 50 states and Puerto Rico.

Wyoming’s first coronavirus case was reported March 11. That number has risen since to about 200, with no deaths reported. On March 19, Governor Mark Gordon ordered the closure of public spaces in an effort to slow the spread of the virus. A day later, Smylie directed congregations to suspend worship, meetings and gatherings, and social activities.

A University of Wyoming statewide survey has revealed that nearly a third of the state’s 577,000 residents say they or their immediate family members have lost jobs or been laid off because of COVID-19.

In Jackson, COVID-19-imposed closures have impacted the local tourist economy, according to the Rev. Jimmy Bartz, rector of St. John’s Church.

“We sit at the southern end of the Greater Yellowstone ecosystem,” Bartz said. “This is the gateway to the Grand Teton and Yellowstone National Parks. Both are closed. We are one of the premiere ski destinations in North America, and our ski resort, the Jackson Mountain Resorts, closed early. Unemployment is epidemic here.”

Concerns that local hospitals could be overwhelmed by the virus prompted the mayors of several cities, including nearby Victor and Driggs in Idaho, to make commercials essentially pleading with people “not to come here,” Bartz added. “We have a less-than-50-bed hospital, and we’re in the early stages of this.” 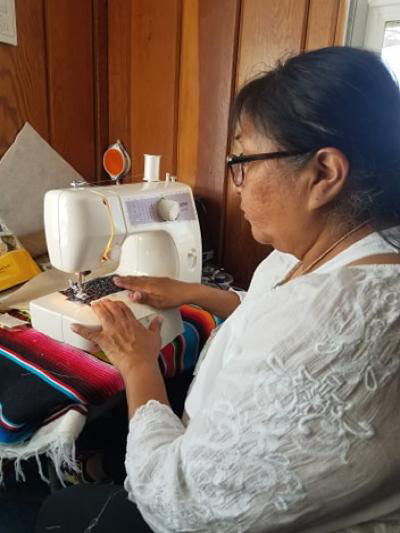 Barbara Ferris-Mireau, a member of the of Fort Washakie community, and an Eastern Shoshone Tribal member, is making masks, quilts and other items as needed. Photo: Courtesy of Wind River Reservation Ministry

As a foundation board member, Bartz had been contacting congregations to offer assistance and support. “A church in Saratoga — which sits in the second-most impoverished community in our diocese — is talking about finding ways to provide Wi-Fi hotspots for students so they could continue to engage in schooling,” he said.

Others are considering strengthening existing partnerships with food banks and local utility providers “because they know people will struggle with light and heating bills. There are a lot of people who are hungry now because they are not employed. They’re trying to reserve cash to pay their rent or mortgage. There have been huge increases in visits to local food banks,” Bartz said.

The Rev. Bernadine Craft, a former foundation board member, is rector of the Church of the Holy Communion in Rock Springs, a community of about 25,000 heavily dependent upon the oil, gas and minerals industries.

“We’re telling people, ‘Let’s use Holy Week as a discernment,’” said Craft, a former state senator who was baptized, confirmed and married in the church she now serves. “We may end up with something we haven’t thought about yet.

“We will divide the money among areas where it is needed most. It can be the difference between whether a family eats that night,” she said. “And then we will apply for additional funding, to continue helping for as long as it takes.”

Craft also serves the Oregon Trail Memorial Church in Eden Valley and said that, while both congregations number less than 50 on an average Sunday, they are very active and excited about the possibilities for helping their neighbors.

The current grants mirror similar diocesan efforts to raise suicide prevention and awareness and alleviate food insecurity. Wyoming has one of the highest suicide rates in the nation, she said. Previously, Smylie created Mustard Seed Grants, where each parish received a $10,000 grant and was invited to spend the money on community improvement.

“Every community in Wyoming is very different,” Craft said. “We found, if we gave grants to local parishes, they could reach as many people directly as possible. This is so incredibly important, to put money where it’s going to do the most good, which is in the community.”

Sweetwater County, where Holy Communion is located, had four confirmed cases of coronavirus, she told ENS recently. The church is considering a high priority those “who have lost their jobs and are now struggling. We are particularly targeting families with children.”

Other high priorities are victims of domestic violence and single mothers with children. “So many people live life on the edge and are one paycheck away from being homeless, from being hungry anyway,” Craft said. “The slightest little thing, which of course is the horrible thing of this pandemic, can push them over the edge.”

In Buffalo, a ranching and tourist community located at the foot of the Bighorn Mountains, the Bread of Life Food Bank has been on the front lines, aiding the food-insecure for several decades, according to the Rev. Doug Wasinger.

“When it became clear that COVID-19 was shifting things around, a group of people who work with feeding kids — the school system, the senior center and Bread of Life — got together to see how kids could get food even when schools closed,” according to Wasinger, rector of St. Luke’s Church in Buffalo.

Previously, the food bank fed about 200 people per week, “and we are anticipating that the number will go up pretty quickly.”

Vestry approval is required for grant-spending, and Wasinger is certain St. Luke’s will support the food pantry. “We will also consider rent alleviation and utility support for the vulnerable, and then we’ll start getting creative,” he said.

“I’m seeing is a lot of creative ways to keep people going, that spread through Facebook and phone calls,” Wasinger added. “There’ll be a post that says a restaurant is open, so call in and order something and go pick it up. There is a real intentionality about keeping people employed and working, even though people are not seeing revenue coming in.”

Wasinger added that Holy Week discernment for spending the grant feels prophetic. “This is starting to feel like the disciples in the Upper Room. This is no longer an intellectual exercise.

“Jesus said, ‘Watch for the resurrection.’ God’s going to do some amazing things through this. Maybe we get a big reset about what’s really important and how do we take care of each other and discover we have a lot of residual strength we didn’t know we had.”