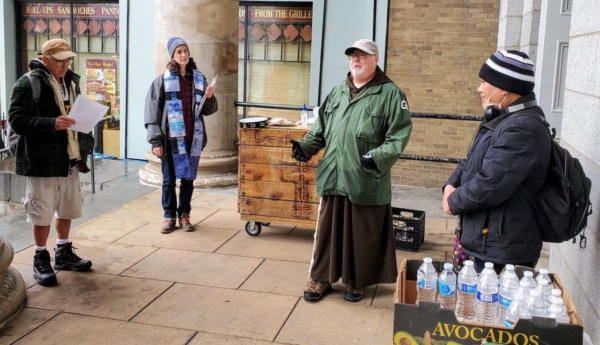 [Episcopal News Service] The Boston homeless congregation known as Common Cathedral is constantly changing the way it helps members cope with the increasing challenges brought on by the COVID-19 pandemic.

Pastoral care in the time of COVID-19 is a challenge everywhere, but that is especially true for people living on the streets who have no place to shelter and far less access to preventive care, said both Grant-Rose and the Rev. Mary Jane Eaton, a member of the Common Cathedral staff. Eaton said she is looking ahead to a far different Holy Week that might coincide with what many experts say could be a surge of infections and deaths.

An ecumenical ministry, Common Cathedral has roots in St. Paul’s Cathedral, across the street from Boston Common, and in the ministry of the Rev. Deborah Little. Its ties to The Episcopal Church remain strong, especially with Emmanuel Church, an Episcopal congregation in Boston’s Back Bay neighborhood, which provides Common Cathedral’s members a place to be three days a week. The church is still allowing 20 to 25 people at a time to come into its parish hall to rest, use a bathroom and get some donated sandwiches and other food to go. The people there are practicing the necessary physical distancing, said Grant-Rose.

“We are going back to ‘What do we have to offer each other?’” Eaton told ENS. “It is not a hot cooked meal, necessarily; it is a basic peanut butter and jelly sandwich. That is the core of who we are. We are still showing up.”

Eaton said the cathedral is moving back to its basics. Little began her ministry by meeting homeless people in Boston and offering them sandwiches, a friendly face and referrals to social services.

Throughout the country, Episcopal churches are trying to help people on the streets. Staff members of Bridges Outreach Inc., which is supported by many community partners including Calvary Episcopal Church in Summit, New Jersey, are working in Summit and Newark, New Jersey, as well as in New York, to help the homeless find safe places to be and, if they have symptoms, a place to quarantine.

In San Francisco, Episcopal Community Services said March 27 that the outbreak of the coronavirus is occurring during what it called the ongoing “humanitarian crisis of homelessness” in the city. The organization is helping people shelter in place at four locations, which are equipped with masks, gloves, sanitizer and other supplies for guests and staff. Janitorial and cleaning services have been expanded to minimize the spread of the virus.

Episcopal Community Services also has added a lunch meal at one shelter so guests do not have to leave to get food. Serving times are staggered to allow more space between people. Staff also worked with the city to extend the operation of the Interfaith Winter Shelter at its Canon Kip Senior Center until April 30.

Back in Boston, the Common Cathedral congregation is still gathering to worship outdoors on Sundays at Brewer Fountain on Boston Common. A different local church delivers food to that service each week. “It has spread out significantly just because of the space required, but it hasn’t changed that much,” Grant-Rose said of the gathering.

Eaton, a Disciples of Christ minister who leads the Sunday service, noted that social distancing is different from physical distancing.

These days, the Sunday worship and all weekday Common Cathedral gatherings begin with a recitation of Jesus’ promise in Matthew 11:28: “Come to me, all you who are weary and carrying heavy burdens, and I will give you rest.”

Finding ways for congregation members to support each other is a challenge now, Eaton said. They used to cook meals together, teach each other in the weekly art class and simply connect with each other. Those things have now all been restricted, she said.

“That’s the same for all churches. It’s just important for my people that they get seen from that perspective as well,” she said. “They’re suffering in the way that housed congregations are. It’s the same loss of connection.”

That also means loss of a semblance of normalcy and social interaction with Common Cathedral’s volunteers, most of whom do have a place to live, Eaton said.

Common Cathedral’s chronically homeless members know how to endure in challenging times, she said. “They have keenly developed that skill.” They know where to go to get food, to get in from the cold, to use the bathroom, to find a way to charge their cellphones. And though the congregation’s members are skilled in endurance, feelings of abandonment can be particularly intense in a time of crisis.

Common Cathedral members often struggle with feeling abandoned by family, friends and society at large, Eaton said. “That’s a real struggle right now. They feel abandoned, so the more we have people showing up to communicate that they are seen, the better.”

Housed and unhoused people, and their churches, have to figure out how to cope with feelings of fear, anxiety and isolation now, Eaton said, “but as long as we stay the church and use the skills we already have and not give in to fear, we’ve got this.”

The foundation for that confidence rests on the fundamental tenet of Christian faith. “We are a church that is about resurrection,” she said.