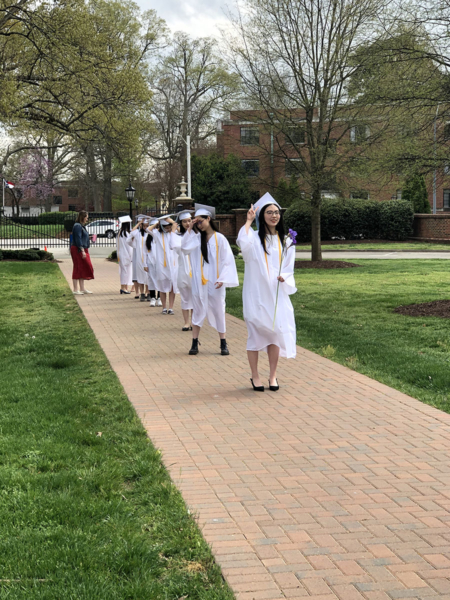 Boarding students at St. Mary’s School in Raleigh, North Carolina stayed in the school’s dorms beyond spring break. As their families arranged for their return home – all are from Asia – the school organized a mini-graduation for the seniors. Photo courtesy of St. Mary’s School

[Episcopal News Service] In early March with spring break approaching, it became clear at St. Mary’s School in Raleigh, North Carolina, that not all of the school’s 295 students would be able to return home. Approximately half of the all-girls college prep school’s students board there, and 10 of those planned to return to their home countries in Asia during the break, the week of March 16.

“Of course that became an impossibility,” St. Mary’s Head of School Brendan O’Shea told Episcopal News Service. With the COVID-19 outbreak rapidly gaining steam in the United States and other countries, China had imposed a two-week quarantine for incoming travelers and Vietnam had set strict limits on who could enter the country. Even if they could get home, returning would be impossible for the Chinese cohort. Other countries were in the mix; on March 11, President Trump banned travel from several European countries, expanding the list soon thereafter.

With schools closing across the United States in an effort to curtail the coronavirus, Episcopal schools with boarding students have found themselves wondering what to do with their international charges. The virus flared in the United States just as many schools prepared for spring break. According to a survey of heads of school conducted by The Association of Boarding Schools on March 4 and 5, 37% of respondents’ schools closed dorms as usual during their respective breaks, while 52% planned to keep at least some dorms open for students and staff. Now, no one knows when, or if, closed campuses will reopen before the summer for in-person learning.

At St. Mary’s, some students stayed with host families. Typically, the school closes its dorms during spring break. “But then we said, ‘Look, you are welcome to stay at our campus,’” O’Shea said. Parents were pleased, and 20 students ultimately stayed on-site — 19 international students and one from New Rochelle, New York, a COVID-19 hot spot.

By the time spring break ended, the school had decided that, rather than return to campus, students would begin virtual classes, and administrators advised St. Mary’s international families that it was time to fly their students home.

“If these girls are ever going to get home, the window of opportunity for them is probably shrinking,” O’Shea said. The last student left campus on March 24. “Before they left, we packed a bag for [each of] them with gloves and hand sanitizer and a mask and a poncho and everything we thought possible that they could want,” O’Shea said.

Many schools face this international student quandary, confirmed Suzanne Walker Buck, a member of The Association of Boarding Schools’ board of trustees and the organization’s COVID-19 task force. Each school, she said, is finding its way through the challenge of pandemic-triggered travel restrictions. “There isn’t a one-size-fits-all model. Our schools are really different,” she said. Moreover, “The responses are changing by the day.”

Students at St. Paul’s School in Concord, New Hampshire, didn’t have special travel bags; the school began its monthlong spring break on Feb. 29, before COVID-19 had so clearly taken root in the United States. But with 14% of the school’s student body (comprised entirely of boarding students) hailing from abroad, including some 50 students from Asia, “we’ve been watching this since January,” said Kathy Giles, the school’s rector.

St. Paul’s advised parents weeks ahead of the break to find someplace for their students to go with a return path that didn’t involve quarantine. In the second week of March, Giles knew that the school might move to online learning. “We offered to host international kids here” to bridge the gap in hospitality and travel, Giles said. They might have had as many as 18 students on campus. But as of March 24, St. Paul’s School, too, has no students on campus, although their belongings remain in their rooms. 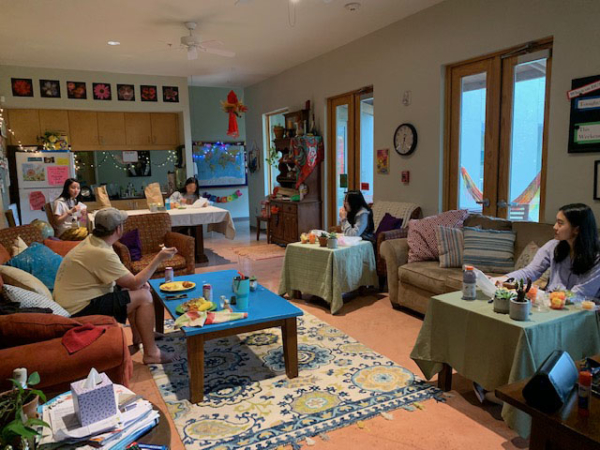 It’s different at TMI Episcopal. Fifteen students, all from China, remain in the San Antonio, Texas, school’s dorms. The six girls and nine boys comprise a portion of the school’s 50 boarding students. In all, 484 students attend TMI Episcopal. The campus closed as usual for its spring break week on March 7, with all students headed elsewhere.

“Of course it all accelerated during spring break,” said Clive Hamilton, director of residential life. The school extended the break by one week, with plans to close the campus and move to virtual learning the week of March 23.

School officials reached out to international families and urged them to have students stay put, whether they were with family or friends. Most did, but some of the school’s Chinese students found themselves without a good option. “What they couldn’t do is return home,” Hamilton said. So the school let them go back to campus. Many returned by plane and settled back into their six dorms, where each student now lives without a roommate. The students are under the care of the school’s dorm parents, school employees who live in apartments adjacent to each dorm, overseeing the 8th through 12th graders living there.

Erin Koehler is one such employee. “I’m the ‘mom’ that checks in with the girls every day,” she said. She’s also the mother of three school-aged sons, who are now schooling virtually from home. Four boarding students are back in Koehler’s dorm. Since the students’ return, TMI Episcopal has instituted social distancing norms. Everyone stays six feet away from each other, including during meals. The school’s catering service delivers two meals plus snacks each day, and a nurse visits daily to monitor everyone’s health.

“Our students have greatly appreciated that,” Koehler said of the nurse’s visits. “They recognize, though, that this is not getting better and this is going to last a lot longer. So some of them are getting antsy and want to go home,” Koehler said. In the meantime, the students are participating in distance learning with their schoolmates, and a physical education teacher offers virtual lessons for them to do outdoors at a sanctioned social distance. And even though they’re all on campus, another dorm parent connected the group via the video conferencing platform Zoom for social interaction and an art show: She gave the students 24 hours to create something, which they then shared the next day via the online platform.

TMI Episcopal students’ emotional well-being is also on the staff’s radar. Koehler said students have been paying close attention since the coronavirus erupted in China; they predicted its arrival in the United States. “They’ve been very scared and nervous, so a lot of our conversations have been, ‘We will take care of you. If one of you becomes ill, we will take care of you,’” Koehler said. “Because at home, there were people who couldn’t get care.”

With most students at home indefinitely and others still at their schools, thoughts were on seniors. Hamilton, at TMI Episcopal, noticed that international seniors, who have wrapped up the bulk of their schooling, seem to find it easier to move back home. For his part, O’Shea noticed his school’s international seniors struggling with the possibility of leaving and missing their final high school milestones. So St. Mary’s held a mini-graduation for them, complete with caps and gowns.

Such ad hoc gestures and makeshift plans characterize the current normal. Koehler used the word “fluid” a lot. “It’s been hard because we don’t know. We don’t know what’s next. We’re doing our very best every day,” she said. Hamilton agreed. “There is no blueprint for how to deal with this,” he said. “But I think what you have to do is, you have a duty of care, a duty of love, and whatever you do, you try to do in the students’ best interest.”