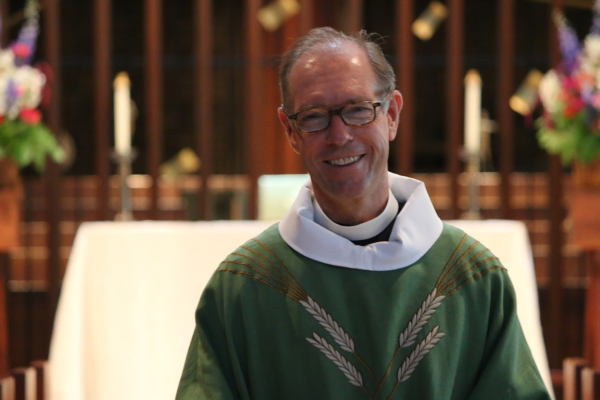 Editor’s note: This story is one in a series of stories about how priests and lay members across The Episcopal Church are caring for one another during the COVID-19 pandemic. If you have an inspiring pastoral care story to share, send it to news@episcopalchurch.org.

[Episcopal News Service] For a church centered around the sacraments as “outward and visible” signs of God’s grace, the COVID-19 pandemic’s hampering of priests’ in-person ministry has posed new dilemmas. While most Episcopalians are now unable to receive the Eucharist in its physical form, many are experiencing the sacrament virtually, through a phone or a computer screen. A Connecticut priest is extending that approach to the sacrament of Anointing of the Sick (sometimes referred to as Holy Unction or Last Rites) as he balances the spiritual needs of his parishioners with the physical distancing needed to slow the spread of the virus.

The Rev. Peter Walsh, rector of St. Mark’s Episcopal Church in New Canaan, Connecticut, administered Last Rites by phone on March 18 to two dying parishioners he could not visit in person. The first, 91-year-old William Pike, had COVID-19, and within minutes of that phone call, he became the second known person to die from the virus in Connecticut.

Pike, a retired business executive and Navy lieutenant who was serving on the vestry of St. Mark’s at the time of his death, was “a pillar of the parish for countless years and, in fact, a pillar of every organization and community that he was a part of,” Walsh wrote in a message announcing his death to the parish. 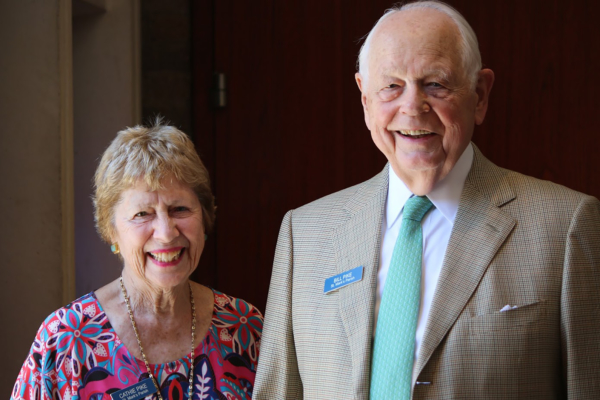 As with the pandemic itself, Pike’s illness progressed rapidly and unpredictably.

“He was due to fly out of town and he had gotten sick” in late February, Walsh told Episcopal News Service. “And everybody thought it was just the flu, and it went from bad to worse, and he was hospitalized.”

Walsh and other community leaders were just starting to become aware of the magnitude of the pandemic at the time.

“It became increasingly clear – beginning, actually the day after Ash Wednesday – that we were really in for a pandemic here,” Walsh said.

Pike seemed to be doing well in the hospital, according to his family, who expected that he would recover and come home, the Stamford Advocate reported. Another priest from St. Mark’s, the Rev. Elizabeth Garnsey, visited Pike – who had still not been diagnosed with COVID-19 – and anointed him, doing “everything right, as far as protocols for visitation to somebody in ICU,” Walsh said.

The following night, the family told Walsh of the diagnosis. Before dawn, Walsh was working with local, state and federal officials to track potential exposures, which led to the quarantining of Garnsey and Pike’s family members. When it became clear Pike was not going to make it, Walsh set up a conference call with his family to pray and decide what to do next. Without much time to spare, a plan was quickly formed.

Walsh and the family members connected by phone again and called Pike’s cell phone, which a hospital nurse held up to his ear.

“As I understand it,” Walsh said, “Bill was not conscious, but what they always say is that it does not mean that people cannot hear.

“I got a chance to tell Bill that I loved him and that all the people in the parish loved him and to say a thing or two about his life. I read the litany of the Last Rites. And then I [hung up] so that the family could have their time. And each of the members of the family were able to tell their dad and their husband that they loved him – and Bill was an extraordinary man, just an amazing man of character. And when they were done, Bill died about 10 minutes later.”

It was the first time Walsh had performed Last Rites over the phone, but it would happen again almost immediately.

“I received a call, literally while this was happening, from somebody else to do Last Rites for another member of our parish, an incredibly humble-hearted and loved guy named Joe Elmlinger,” Walsh said.

Elmlinger was 90 years old and dying of cancer in a hospice. He had told Walsh during a previous visit that “he was ready to die and he simply wanted to follow the path to his Lord.” Members of his family were with him in the hospice when they called Walsh, but Walsh could not enter because of COVID-19 restrictions. So, after hanging up with the Pike family, Walsh FaceTimed one of Elmlinger’s sons, who set up his phone facing Elmlinger in his wheelchair, and prayed the litany of Last Rites.

Though Walsh could not administer the sacrament in person as it is described in the Book of Common Prayer, he pointed to a rubric in the rite for Communion contained within the Last Rites litany: “If a person desires to receive the Sacrament, but, by reason of extreme sickness or physical disability, is unable to eat and drink the Bread and Wine, the Celebrant is to assure that person that all the benefits of Communion are received, even though the Sacrament is not received with the mouth.”

Walsh is encouraging his parishioners to consider the Eucharist this way as they watch livestreamed services, and he suggested that the spiritual benefits of Last Rites can similarly transcend physical presence, especially when it is desired but not possible.

“Dire times demand creative solutions,” he told ENS. “There are certain mysteries in the body of Christ that defy our reasoning. … And I have a great trust in the living Christ to be the one who really lays hands on the sick.”