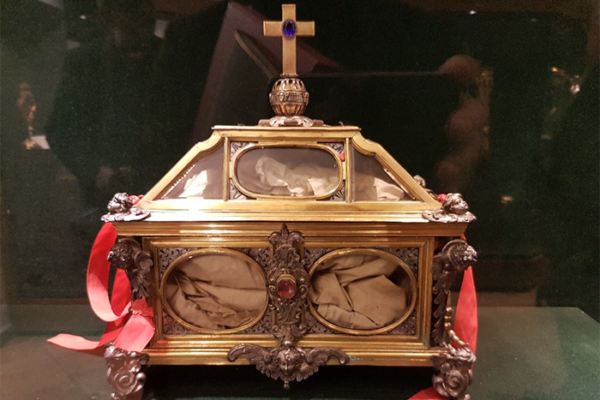 This 17th-century glass reliquary, which houses the vestment thought to have been worn by Archbishop Thomas Becket when he was martyred in 1170, is being loaned to Canterbury Cathedral by the Vatican. Photo courtesy: Anglican Communion News Service

[Anglican Communion News Service] The tunicle that former Archbishop of Canterbury Thomas Becket is thought to have been wearing when he was murdered is to return to Canterbury Cathedral for an exhibition marking the 850th anniversary of his martyrdom. Archbishop Becket was murdered in Canterbury Cathedral on Dec. 29, 1170 by four knights of Henry II. Tradition says that they interpreted Henry’s words “Will no one rid me of this turbulent priest?” as a command for him to be assassinated.

The relic will go on display to mark 850 years since his death and 800 years since his remains were moved from the cathedral’s crypt into a new shrine. The tunicle is housed inside a 17th century glass reliquary which usually resides at the Papal Basilica of Santa Maria Maggiore in Rome. It is being loaned to the cathedral by the Vatican for public display from July 4 to Aug. 3.