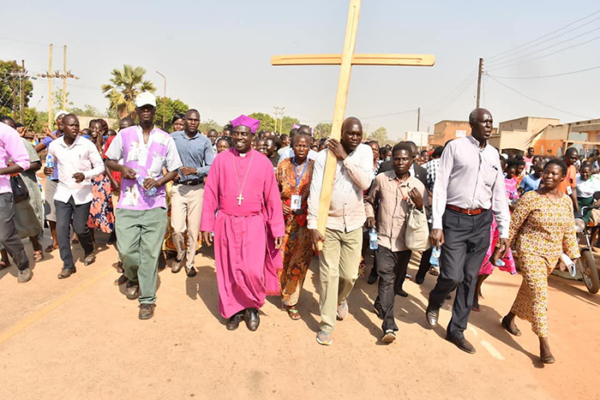 Pilgrims arrive in Kitgum, the burial site of Archbishop Janani Luwum, who was martyred in 1977. Photo courtesy ACNS

[Anglican Communion News Service] A group of 76 pilgrims has walked the final journey of Archbishop Janani Luwum to commemorate his 1977 martyrdom. The pilgrimage began at the place of Archbishop Janani’s arrest, Namirembe, on Jan. 29 and ended in Mucwini in Kitgum, where he is buried, on Feb. 14. The journey was 500 kilometers long (approximately 310 miles).

The pilgrimage was organized by the Church of Uganda, but was open to all Christians who wanted to join. Former undersecretary-general of the United Nations and special representative for children and armed conflict Ambassador Olara Otunnu led the pilgrims to Kitgum.